The GTA's Filipino population is growing, but signature dishes from the Philippines are still hard to find downtown. Here's where to try them, from the core to the 'burbs. 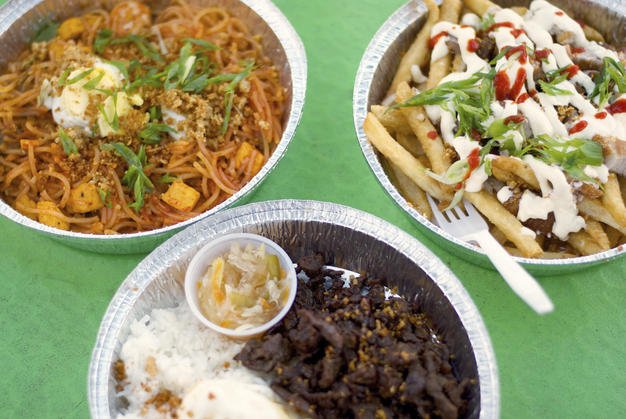 Did you know that the Philippines was the biggest source of immigrants to Canada last year – and that Toronto has the country’s largest population of Filipino expats?

That might not be the case for long. Lamesa Filipino Kitchen co-owner Les Sabilano says the country’s culture and cuisine are beginning to make waves across the GTA, and a North America-wide movement featuring up-and-coming Filipino chefs is slowly spilling into Toronto.

“When we were younger and our parents had first arrived here, their objective was really just to fit in. It wasn’t about being Filipino – it was more about being Canadian,” he says. “But now, having been more integrated into Canadian society and feeling more a part of the fabric [of Toronto], I think it’s more like, ‘Well, how come our culture isn’t being represented?'”

That might account for the strength of the outcry over a recent Toronto Star travel piece focusing on Manila, which lingered rather uncomfortably on the “ick factor” of some Filipino delicacies. Though a few might be, um, acquired tastes (balut, a fermented duck embryo served in the shell, springs to mind), there are dozens of Filipino dishes that should be mandatory eating for any Torontonian with taste buds. Here are just a few spots you need to try. 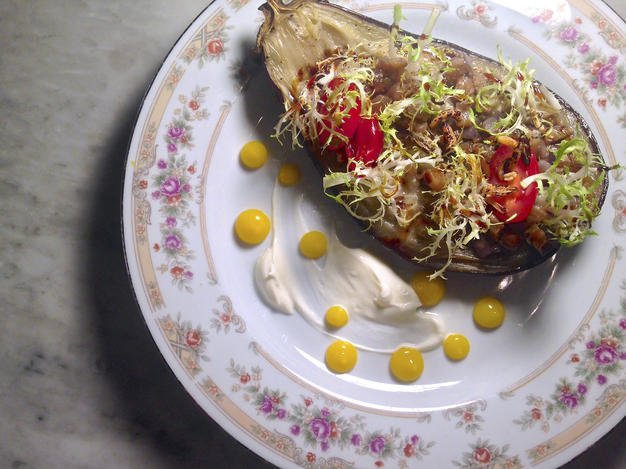 Lamesa might be the only full-service Filipino restaurant in downtown Toronto. It’s also a completely different beast from the homestyle spots that have proliferated in the burbs.

That’s truer than ever now that Daniel Cancino, a former Lamesa sous who took a year away to work at the now shuttered Hudson Kitchen, has become head chef. Sabilano says Cancino might be the most sophisticated chef they’ve had, something his newly unveiled fall/winter menu easily proves: he marries traditional dishes and flavours with dramatic plating, but doesn’t shoehorn in “fusion” twists.

Citrusy, ceviche-like tuna kinilaw is stacked high atop a layer of coconut guacamole. Dinuguan, pork blood stew, is reimagined as an elegant plate of twisty, just-done octopus tendrils and tender pork cheek in a deep-maroon sauce. And while it’s not exactly halo-halo, his ube leche flan’s joyous jumble of favourite dessert ingredients (grape-purple ube yam, puffed rice, tapioca pearls, custards and jellies) is as much a feast for the eyes as the taste buds. 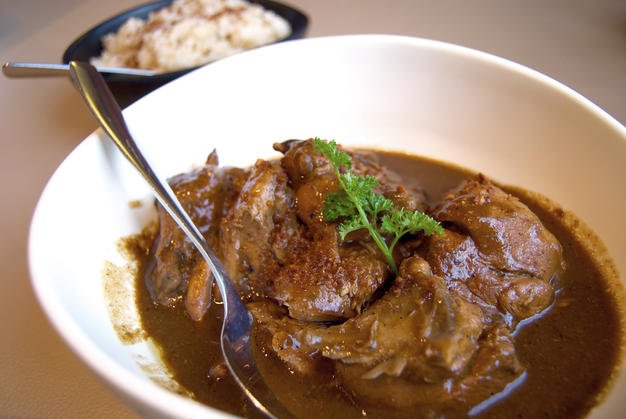 Don’t let its location in a nondescript North York strip mall fool you. The interior of Casa Manila, with its bent-bamboo chairs and tropical rattan lighting fixtures, is downright adorable.

The spot is known locally for its large-format kamayan dinners as well as its shareable take on the Philippines’ national dessert, halo-halo. It’s served in a bowl as opposed to a parfait glass, with all the dozen or so ingredients (a sampling: shaved ice, flan, ube ice cream and pudding, jackfruit strips, sweetened beans, cubes of coconut and pandan jelly) in clumps so you can pick and choose your favourite parts.

Dine solo if you must, but prepare for leftovers: my portion of chicken adobo (“the national dish of the Philippines,” the menu blurb reminds me) included six sizable hunks of bone-in bird swimming in a rich, salty gravy perfect for spooning onto rice topped with crispy-fried garlic bits. Get some wrapped up (the sweet-as-pie servers are happy to oblige) to save room for dessert, including bright purple ube cake or a custardlike cake made of cassava and coconut. 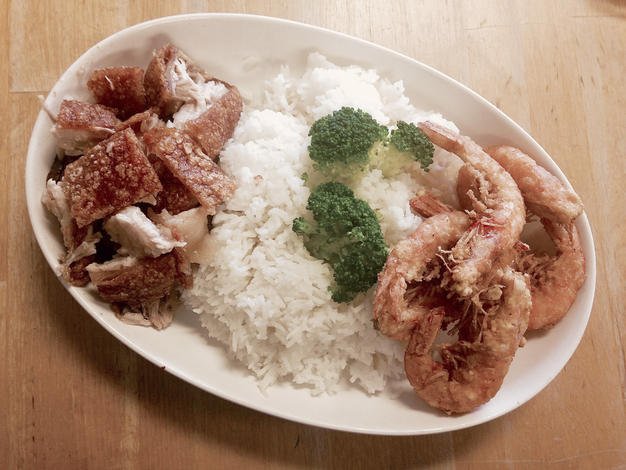 This cafeteria-like takeout joint located in a dense strip of Filipino businesses at Bathurst and Wilson comes up a little short in terms of atmosphere. But there are two things Sampaguita doesn’t skimp on: portion sizes and speed.

I place an order for a combo meal of deep-fried shrimp and lechon kawali (roasted pork belly) and a platter that could easily feed two people shows up in roughly four minutes. The lechon is either melt-in-your-mouth pork flesh or tooth-sticking crackling, both delicious the whole shrimp are piping hot, with just enough spicing to get a mild burn going. On the side: a mountain range of rice and three pieces of steamed broccoli, there basically for decoration.

Deciding that the theme of the day is “indulgence,” I make like half the families swooping in and out and grab some takeout: kare-kare, a rich, peanutty oxtail stew swimming with green beans. It shows up in roughly eight minutes, like clockwork.

The closest thing you can get to homemade Filipino eats downtown is this stall in Market 707 where owner Diona Joyce (or, depending on the day, her mom) cooks up a smorgasbord of rib-sticking, heart-warming faves packed up in takeout-ready containers. The arroz caldo (Spanish name, Chinese formula) is a gingery, lemony congee decked out with chunks of egg and pork, a guaranteed cure for anything that might be ailing you (cold, flu, general ennui). Less traditional but no less delicious are the sisig fries, which pair the traditional chopped-pork dish with golden frites and tons of lemon aioli. Also worthy: tapsilog, slow-stewed marinated steak flanked by rice and a sunny-side-up egg, and palabok, the love child of pad thai and spaghetti. Maybe I’ll have screwed up the courage to try the balut by the next time I visit. 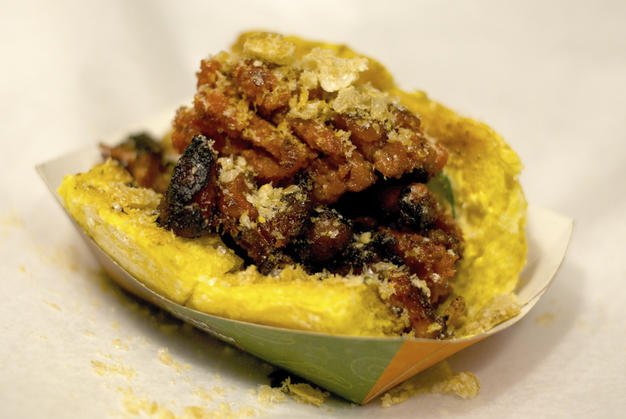 Tocino Boys takes over Midpoint three nights a week with eats like the Supreme Supreme sandwich.

Every Thursday-through-Saturday, Johnny DeBlois transforms the back kitchen of Queen West bar the Midpoint into his Tocino Boys pop-up. He started out two years ago slinging Filipino-inspired street eats at food events, building a menu around what he felt was one of the Philippines’ most crowd-pleasing offerings: tocino, or bacon cured with salt and sugar. (You know that bacon-and-sweets-thing trend that started here in like 2012? They were on that decades ago in the Philippines.)

Here, you’ll find it sprinkled over some Toronto mainstays: poutine, tacos, sandwiches (specifically the Supreme Supreme, which also piles Canadian and strip bacon, chorizo and chicharrón onto a sweet bun), and DeBlois’s show-stopping Manila fries, which come topped with a fried egg and flanked by a pile of coleslaw. Fear not, pork-averse folks, there are also plenty of chicken and veggie options (which, really, is more than you can say for a lot of Filipino restaurants).