"You don’t know the extent to which you have been mistreated, because on some level you think this is normal." 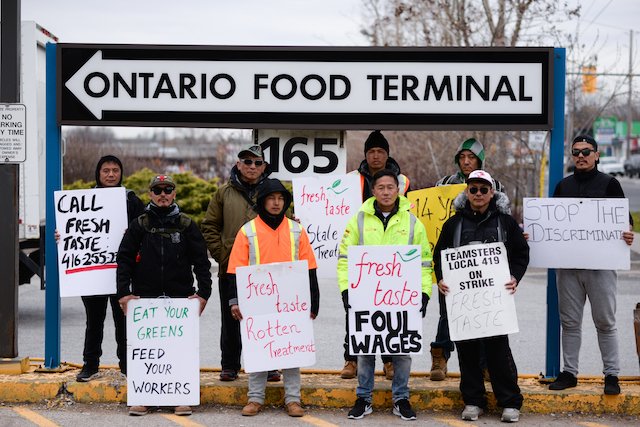 Stop and consider the salad in your sandwich, the berry in your smoothie or the saag in your paneer. If you didn’t grow that piece of leafy green yourself, or buy it directly from a farmer at your local farmer’s market, chances are it would’ve been handled by a line of workers employed at the Ontario Food Terminal.

Until recently, Thupten Nyendak could’ve been one of them. He worked full-time for Fresh Taste Produce, one of the distribution companies (called “warehouse tenants”) at the Ontario Food Terminal. Since April 21, Nyendak and 13 of his colleagues have been on strike, protesting low wages, lack of job benefits and workplace harassment. They have been bargaining for a first contract since November.

I meet with Nyendak, better known as “Jack” to his friends and co-workers, last Thursday morning on the picket line. We are joined by Tenzin Nawang Tekan, an organizer at the Parkdale Community Legal Services (PCLS), with whom I hitched a ride, and Sonam Chokey, a friend who is also national director of the Tibetan activist group, Students For A Free Tibet Canada. Tekan brings a pot of Tim Hortons coffee and Tibetan-style bread for the workers. She has been coordinating actions and spreading word about the strike: creating a Facebook page, designing placards, distributing flyers, and sharing a steady stream of Twitter posts and photos.

She says she heard about the strike on CBC Radio and “had to come, not just to support fellow Tibetans, but other things we are fighting against: precarious employment and immigrant abuse. They’re all connected.”

The morning is clear and unseasonably cold at 7 am. Thupten and his co-workers have been here everyday at 1 am since the strike began.

The Ontario Food Terminal is located beside a strip mall near the mouth of the Humber River in a semi-industrial zone on the Queensway. The Humber Wastewater Treatment Plant is  about a block east across the street. On warm days, the smell of the sewage hangs like a fetid, funky cloud over the area, causing unsuspecting drivers and their passengers to wonder who ripped a silent one as they drive through.

At nearly 20 hectares in size, the Food Terminal is where almost all the produce in Toronto – be it organic or GMO, local or from California — is delivered, sorted and sold. With more than 400 seasonal vendors and 21 permanent warehouse vendors, the Food Terminal distributes nearly 2.5 million kilograms of fruits, produce and horticultural products everyday to hungry mouths in the Greater Toronto Area and beyond. Thousands of workers are employed by the vendors to ensure smooth delivery of food. Of this workforce, almost 400 are Tibetan- Canadians.

Before they joined the Teamsters back in October, Nyendak says Fresh Taste workers who complained about being shortchanged on hours worked or requested a pay raise would be told  by management “to walk. There are many other Tibetans like you outside, they’d tell us,” says Nyendak.

Because he was one of the more vocal employees, Nyendak says he tolerated less of this kind of treatment, letting management know whenever they crossed the line. His confident personality is one of the reasons his colleagues appointed him union steward.

Then there is Zaheed Shamshadeen. Originally from Guyana, he is one of the three non-Tibetans among striking workers at Fresh Taste. He has been an employee at Fresh Taste for 18 years, starting at $12 an hour. He has been earning $14.50 an hour for the last eight years.

“They treat me like shit,” says Shamshadeen, who is reluctant to speak at first. Nyendak encourages him. “Zaheed, tell them how they bully you.”

“They call me names,” Shamshadeen says. He looks downcast.

In spite of his shy nature, there’s a steely sense of determination from Shamshadeen. He has been coming here at 1 am, from Mississauga, and leaving at 1 pm everyday since the strike began. He has a mortgage to pay, a family with young kids to look after, but he has no plans of giving up. “It takes me 45 minutes by TTC one way,” he says. “But I’m going to keep protesting. They can’t keep treating us like this.”

The sales team and the administration staff of Fresh Taste are not joining their warehouse colleagues on the picket line. Thinley Sangpo, one of the older Tibetan workers, chimes in: “These [the sales team] are kids of around 20, 30 years old. They have no respect. None whatsoever.

“They’re not all that much more educated than us,” Sangpo adds. “We have better knowledge about the work that needs to be done at the company, and then a guy comes, and in less than two years, he starts making $40 an hour. That doesn’t make any sense.”

Sangpo, who hails from Kathmandu, Nepal, is a veteran of Fresh Taste. He lives in a rental apartment in Parkdale with his wife and two children. But like most of the striking workers here, this is his first brush with labour strife.

“It has been an eye-opening experience,” says Sangpo. He frowns as he searches for words. “You don’t know the extent to which you have been mistreated, because on some level you think this is normal. But how can there be other places at the Food Terminal where workers get paid $20 an hour as a starting wage? And meanwhile you have someone like Zaheed who gets paid less than $15 even after 18 years of work. How is that fair?”

“We are not asking for more than what we deserve,” Sangpo continues. “We are just asking for what everyone else is already getting.”

This isn’t Fernando Costa’s first labour disruption. Costa was previously employed at Rite-Pak Produce, a neighbour of Fresh Taste. He is slightly distracted as I try to interview him. He is managing the flow of the cars through the picket line and into the Food Terminal, letting them in at two-minute intervals. This protocol was agreed to between the picketing workers and the Ontario Food Terminal Board. As someone who was part of the union drive at Rite-Pak 20 years ago, Costa is perhaps the most knowledgeable of the bunch.

“It might take a week. Two weeks. A month,” he says. “But we’re gonna stay put until they come to the table. They [the Tibetans] are strong. I’m sticking with them.”

Fresh Taste, for their part, have hired temporary replacement workers to maintain operations. Beyond that, there has been little comment from management, and no response to requests for comment from NOW on workers’ charges.

Nyendak says management distributed sealed envelopes to each of the workers before they took strike action. Inside were letters promising to raise wages. But it was nowhere near the $21 figure that Nyendak and his union argue is industry standard at other warehouses at the Food Terminal.

There was also that time when a son of one of the managers at Fresh Taste threatened to bring his group of friends and beat up one of the workers. The police were notified and he has since apologized.

At the Food Terminal, striking workers are joined almost daily by a steady stream of supporters from different community groups and labour organizations, people like Pam Frache, the Ontario coordinator for Fight for $15 and Fairness labour rights advocacy group.

Frache and her group have been lobbying the Wynne government to review labour laws, and enforce regulations to make sure employers treat and compensate their employees fairly. For her, this protest is a part of a growing movement she believes ties together labour rights movement from different sectors: cleaners, airport staff, grocery store workers. “This race to the bottom is an unsustainable business model,” she says, referring to how wages in Ontario haven’t kept pace with inflation.

She hears the group shouting slogans behind her and is distractedly momentarily. She continues, “This kind of struggle is happening across the city, across the province and across Canada. It touches my heart that everyone is coming together on this. It’s not just a workers issue. The Tibetan community right now is feeling the pressure they’re seeing the discrimination here. I know this because I am of Caribbean descent people feel that everyday in Toronto.”

Cole Webber, a colleague of Tekan’s at Parkdale Legal, has been organizing tenants in Parkdale, many of them Tibetan-Canadians. He has driven to the protest site and brought along two of his friends, both of whom work in the food and retail sector. One of them, Tom McGee, connects the labour strife here with workers’ movements in places like Mexico. “It’s crazy that there are people here willing to pay premium prices for their niche, organic diet food, and meanwhile, we’ve got workers at the Food Terminal who are barely making ends meet.”

Cheri DiNovo, the NDP MPP for Parkdale-High Park, where most of the Tibetan-Canadian workers live, has been on the picket line with workers, too. The Food Terminal is located in Liberal MPP Peter Milczyn’s riding of Etobicoke-Lakeshore, but so far he has made no public statements on the matter. His office has not returned calls from this reporter.

DiNovo’s party has been pushing for anti-scab legislation. Without that, she believes, there is no incentive for employers to come to negotiate with striking workers. The Ontario government has no intention of introducing such legislation, says Craig MacBride, press secretary to Labour Minister Kevin Flynn, via email.

DiNovo continues: “Many of the Tibetans who are protesting know what real oppression is. And for them to come here, after all they’ve been through, and to be treated this way is just shameful.”

This broad demonstration of solidarity swells the chest of Sangpo. There were moments early on, he admits, when he had doubts. “We’re not as educated. We’re humble and hardworking. I want to get back to work, as soon as possible. But once you know something like this (he gestures to the picket line), you become aware of your rights. You feel how your dignity is being kicked around, and it eats at your heart. You can’t allow them to continue treating you like this, because then they’ll do the same to others too.”

This idea that immigrants should be glad to have a job has been prevalent in online comments on the Food Terminal strike. The sentiment is captured in part by a recent incident involving a car that ran through the picket line. The driver, in a video of the incident posted by CBC, comes back not to apologize but confront workers. He had, while plowing through the picket line moments earlier, knocked a Fresh Taste worker to the ground.

“Everyone single one of you Fresh Taste people I treated with respect!” he screams, gesturing angrily at the group. “You come in here and kick my car?” This idea of respect, it seems, ends when it causes a traffic delay.