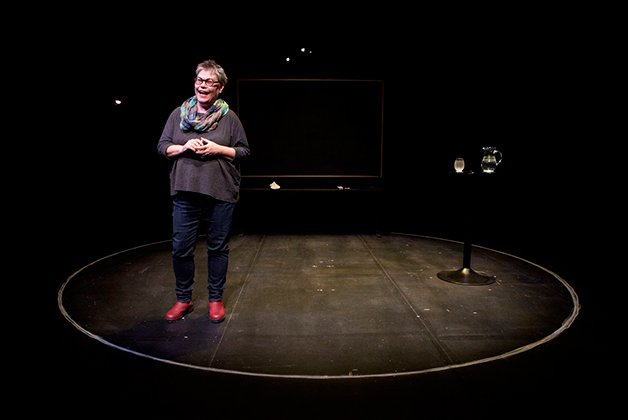 The Theatre Centre opened its new home on Queen West last week with Alanna Mitchell’s Sea Sick, a work that had all the hallmarks of the shows the Centre helps develop: it was personal, thoughtful and engaging.

Based on her book of the same name, it shows Mitchell putting together the pieces of her journalistic research to discover a scary picture of the global ocean’s rapidly increasing acidification.

She admits at the start that she’s neither actor nor scientist, but she sure knows how to hold an audience’s attention.

With the help of directors Franco Boni and Ravi Jain, she’s devised a script that touches on her Prairie childhood, her scientist father and painter mother as well as her observations about the earth’s changing atmosphere and what it’s doing to life on the planet. (As part of the Centre’s launch, some of Mitchell’s mother’s large-scale flower paintings were on display in the lobby.)

Why a performance rather than a lecture? As Mitchell says early on, she’s realized that science provides us with knowledge but art gives us meaning. This university Latin major and fan of Bob Dylan, fearful of water but determined to snorkel and even descend inside a submersible miles below the ocean’s surface, makes a cogent and, just as importantly, gripping case for the changes we’ve made to the environment since the Industrial Revolution.

Some may find the note of forgiveness at the end Pollyanna-ish, but it’s part of Mitchell’s own warmth, clear from the start. In a show that’s as theatrical (thanks in part to Rebecca Picherack’s lighting design) as it is instructive, optimism is a way to move forward rather than mire us in paralyzing gloom.

Many across the country are concerned, including more than 30 performing artists who have come together for Holler 4 Health Care!, a political rally driven by music and comedy and organized by playwrights David S. Craig and Paul Ledoux.

There’ll also be videos by Kiefer Sutherland and Rick Mercer. Mercer’s rants on his TV show are often the best parts of the program, and he sure has reason to rage at the government over health care.

It isn’t easy starting over in a new country, especially if you’re young and the move wasn’t your choice.

In Beatriz Pizano’s La Maleta, a Roseneath Theatre tour visiting Grade 2 to 6 classes across Ontario, 10-year-old Roca leaves Colombia for Canada, bringing something comforting with her: a suitcase (the maleta of the title) that contains, she believes, her loving grandmother.

Roca (Alejandra Simmons) has been sent away to an aunt in Toronto by her grandmother (Anita La Selva) because her mother and journalist father have gone into hiding it’s feared she might be in danger, too. This kind of emotionally difficult storyline isn’t usual in theatre for young audiences.

But in the hands of the playwright, director Andrew Lamb and the quartet of actors, it touches on serious material with a lightness grounded in the power of the imagination.

It’s not just Roca’s fleeing to Canada that creates tension. She’s bullied by a classmate (Jessica Zepeda, who also plays an indigenous Colombian woman, Roca’s invisible friend) who finds her strange, and the one friend she makes, Paz (Joseph Recinos), is a Colombian boy who’s lost his leg in a land mine explosion.

Simmons and La Selva ground the play, making the relationship between Roca and her grandmother strong and believable. Designer Lindsay Anne Black adds theatrical magic with a suitcase that really does contain a surprise: an unfolding backdrop that takes Paz and Roca to a place of contemplative contentment that also visually echoes the grandmother’s blouse.

Pizano, artistic director of Aluna Theatre and a strong proponent of bilingual Latin-Canadian works, uses both English and Spanish in La Maleta without distancing viewers who only understand one of the languages. Touring the States next year, the production is sure to find young audiences who speak both.

A mini indie theatre festival runs at the Great Hall this week. Admission is free, though donations at the door are encouraged and earmarked by the individual companies for particular charities.

On Stage On Demand, organized by Jackie English, offers six productions over five days (April 1 to 5). All have played previously in the Fringe and elsewhere in town, and each performance is followed by a Q&A.

In addition, Bell Local will film behind the scenes each night and show the videos on its website (local.bell.ca).

The Body Percussion Festival proves that not all music needs to be played on instruments.

Artistic director Viv Moore wants to demonstrate the variety of rhythms and music that can be made through dance, voice and movement alone.