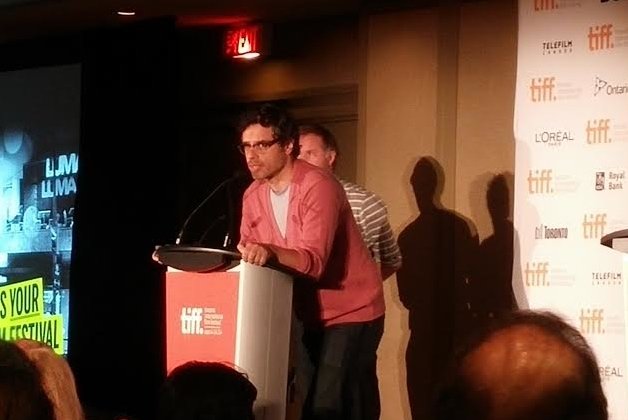 Jermaine Clement, director of What We Do In The Shadows. Photo by Norman Wilner

The 39th Toronto International Film Festival has come to a close. At the traditional awards brunch this afternoon, TIFF co-directors Piers Handling and Cameron Bailey joked about being too tired for a ceremonial Maori dance (as performed by the cast and filmmakers of The Dead Lands after that film’s Toronto premiere), paid tribute to festival co-founder Bill Marshall and promised an even more ambitious TIFF for next year’s 40th anniversary edition.

But you want to know about the prizes, of course. So here they are.

The top prize, the Grolsch People’s Choice Award, went to The Imitation Game, Morten Tyldum’s dramatization of British mathematician Alan Turing’s work with the Enigma codebreakers during the Second World War. The first runner-up was Isabel Coixet’s Learning To Drive, and the second runner-up was Theodore Melfi’s St. Vincent.

People’s Choice Awards are handed out two other programs. The Documentary prize went to Hajooj Kuka’s Beats Of The Antonov, about the music that sustains the cultural identity of Sudanese refugees displaced by civil war Kuka dedicated his award to “the community of Sudan,” adding “This is not a war movie. It’s a love movie.” David Thorpe’s Do I Sound Gay? was the first runner-up, and Ethan Hawke’s Seymour: An Introduction was the second.

The Midnight Madness prize went to Taika Waititi and Jemaine Clement’s What We Do In The Shadows, a mockumentary about vampires living most unglamourously in Wellington, New Zealand. Clement, who co-stars in the film with Waititi, accepted with a tongue-in-cheek speech in which he begged “for an end to the awful practice of vampire hunting around the world,” citing Anthony Hopkins and Hugh Jackman for their complicity in the ongoing slaughter – presumably because they’ve both played Bram Stoker’s character Van Helsing in movies.

Backed by a $30,000 cash prize, the Canada Goose Award for Best Canadian Feature Film went to Maxime Giroux’s Felix And Meira, a romance about two Montrealers from very different worlds.

The City of Toronto Award for Best Canadian First Feature, which carries a cash prize of $15,000, went to Jeffrey St. Jules’s Bang Bang Baby, which stars Jane Levy as a ’60s teenager whose dreams of big-city stardom are complicated by the toxic contamination of her small Ontario town.

The Vimeo Award for Best Canadian Short Film – which offers a $10,000 cash prize – went to Randall Okita’s The Weatherman And The Shadowboxer, a blend of live-action and CG animation about two brothers with very different memories of their childhood. Accepting the award, Okita dedicated the prize to his mother, “and to the survivors who become adults and parents, and find better ways to love.” Rob Grant’s What Doesn’t Kill You received an honourable mention.

The NETPAC award, bestowed upon an Asian film making its world or international premiere, went to Shonali Bose’s Margarita, With A Straw, about a young Indian woman who comes to NYU and falls in love.

And that wraps up NOW’s TIFF coverage for another year. As is traditional, the festival is holding a free screening of The Imitation Game tonight (Sunday, September 14) at 6 pm at the Ryerson Theatre admission is first-come, first-served, and it’s likely to be at capacity by the time you read this. Don’t worry you’re sure to have ample opportunity to see the film when it opens later this fall. It just won the biggest prize at TIFF the Oscar campaign begins today.