Lenny Abrahamsons Room, starring Brie Larson as a young mother who will do anything to protect her own son, was. 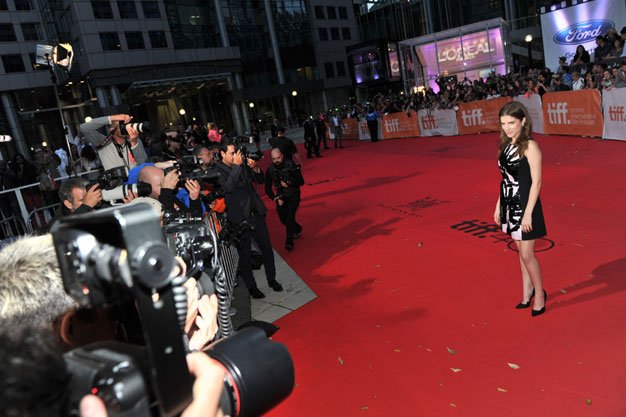 Lenny Abrahamsons Room, starring Brie Larson as a young mother who will do anything to protect her own son, was named the winner of the Grolsch Peoples Choice award at the Toronto International Film Festivals closing ceremony earlier this afternoon.

The award immediately vaults the small-scale drama to the forefront of Oscar conversation as the festival never hesitates to remind us, six of the seven films that have won the Peoples Choice prize have gone on to an Academy Award nomination for best picture, with Slumdog Millionaire, The Kings Speech and 12 Years A Slave actually winning the top prize.

In an auditorium at the TIFF Bell Lightbox as opposed to the traditional hotel-ballroom press brunch co-directors Piers Handling and Cameron Bailey celebrated the win and named Pan Nalins Angry Indian Goddesses and Tom McCarthys Spotlight the runners-up for the top prize.

The Peoples Choice for Documentary was Evgeny Afineevskys Winter On Fire: Ukraines Fight For Freedom runners-up were two Canadian productions, Avi Lewiss This Changes Everything and Brian D. Johnsons Al Purdy Was Here.

The Peoples Choice for the Midnight Madness program was the Russian first-person thriller Hardcore, directed by Ilya Naishuller runners-up were Todd Strauss-Schulsons The Final Girls and Jeremy Saulniers Green Room.

The $30,000 Canada Goose award for Best Canadian Feature Film went to Stephen Dunns Closet Monster. Introducing the prize, Don McKellar who served on the jury alongside Jacqueline Lyanga (director of AFI Fest) and Ilda Santiago (executive director of the Rio de Janeiro Film Festival) took a moment to half-jokingly express the jurys exasperation at having to choose one winner from such a strong slate of films. (An honourable mention was awarded to Philippe Falardeaus My Internship In Canada.)

The City Of Toronto prize for Best Canadian First Feature Film, with a cash prize of $15,000, went to Andrew Cividinos Sleeping Giant. And another Canadian filmmaker was the winner of the festivals inaugural Toronto Platform prize a juried competition of 12 features with a $25,000 purse.

Accepting the prize, Zweig whose When Jews Were Funny was named Best Canadian Feature Film at the 2013 festival was characteristically self-deprecating about being in awe of the jury. Theyre not a bunch of people from Toronto who know me, he said. Theyre filmmakers whose films are the kind of films I saw here when he attended TIFF as a young man.

The International Federation Of Film Critics awards two FIPRESCI prizes, one for the Discovery program and another for the Special Presentations program. This years winners were Marko Skops Eva Nova and Jonas Cuarons Desierto, respectively. Accepting the award for Desierto alongside director Cuaron, star Gael Garcia Bernal dedicated the win to the migrants of the world: They dont go because they want to, he said. They go because they have to.

The Short Cuts award for Best Short Film, which also carries a $10,000 cash prize, went to Maimouna Doucoures Maman(s). In an emotional acceptance speech, Doucoure dedicated the win to her parents: I grew up with two mothers, she said, and I wrote this story for [them].

As is traditional, the festival will hold a free screening of Peoples Choice winner Room at Roy Thomson Hall tonight (Sunday) at 8 pm tickets will be distributed on a first-come, first-served basis at 6 pm. Really, though, if youre reading this and youre not already in line, youre probably out of luck.