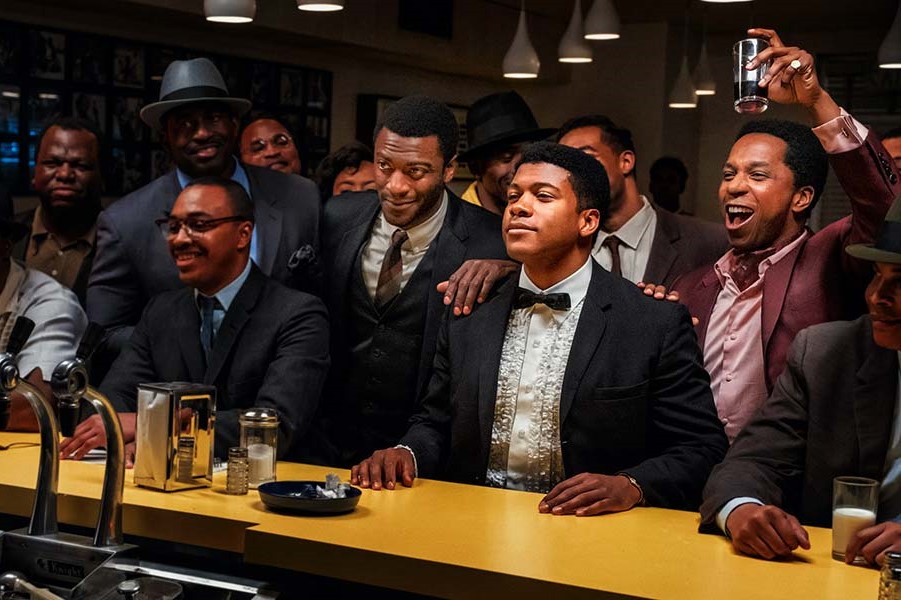 Kemp Powers’s stage play One Night In Miami… unfolds on February 25, 1964, the night Cassius Clay beat Sonny Liston in Florida to become the heavyweight champion of the world – with Malcolm X, Jim Brown and Sam Cooke in the crowd.

Eli Goree plays Clay, who would soon announce his conversion to Islam and take the name Muhammad Ali; Kingsley Ben-Adir is Malcolm X, Aldis Hodge is Brown and Leslie Odom, Jr. is Cooke. The four friends get together at Malcolm X’s hotel expecting a party, only to find themselves alone with one another.

With nothing to do but talk, these four uniquely positioned Black celebrities – who understand each other’s circumstances as few others can – wind up doing just that, starting with grousing about the lack of snacks and eventually moving on to debate culture, politics, religion and race.

Bob Dylan just released Blowin’ In The Wind, a song that’s undeniably about racial injustice in America: why does Sam stick to crooning love songs? Why won’t Jim stand with the Nation of Islam? What’s Malcolm hiding about his future plans? Does Cassius really think he can start calling white people devils when they’re the ones who pay for his training?

One Night In Miami… also marks the directorial debut of Regina King, an actor who has never shied away from urgent, contentious material. King’s approach to the play is to let the text and her cast do the talking: the urgency emerges naturally, from the characters’ conversation. It’s not a flashy film, but it doesn’t have to be; King’s created a sharp, confident picture, a movie that lets you enjoy the characters’ moment-to-moment sparring (verbally and otherwise) but never forgets their stature.

And she’s assembled a great cast. The four leads aren’t exactly unknowns, but neither are they A-listers; they can still disappear into their historical personages and not distract us with their own celebrity. (Okay, Odom’s singing voice is notably different from Cooke’s, but when you have the guy who played Aaron Burr in Hamilton, why would you make him lip-sync?) Ben-Adir’s watchful, worried Malcolm quietly holds the centre of the drama, while Goree’s interpretation of Cassius Clay is a delight – a performance of a man whose entire professional life was a performance unto itself. When the mask drops and Cassius expresses real anger, it’s shocking.

But I think I’m most impressed with Hodge’s Jim Brown. Jim doesn’t have much to do in the film, but he knows who he is and how others see him. He knows he’s aging out of a football career, and there’s a sadness that creeps into his eyes as he listens to his friends talk about their futures. He’s got a different path ahead of him – and it’ll probably be all right, but it won’t be the same.

Hodges’s performance – and the way King and Powers introduce him in the movie – provide a melancholy anchor to One Night In Miami… that wouldn’t have been possible in the stage play. It makes me want to see what he’ll do next almost as much as I want to see what King does with her next project.