Should films most likely to succeed get rewarded with tax dollars? Telefilm’s Dan Lyon and filmmakers Kazik Radwanski, Matt Johnson and Ingrid Veninger duke it out to a full house of industry members at Breakfast at TIFF event 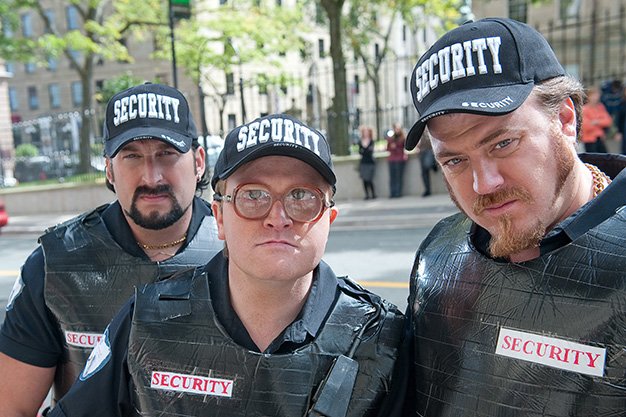 Is Trailer Park Boys: Countdown to Liquor Day really the best we can do

Is Trailer Park Boys: Countdown to Liquor Day really the best we can do, Telefilm?

A few months ago, Toronto filmmaker Matt Johnson got the Canadian film industry’s attention when he took shots at Telefilm and TIFF. In interviews with Calum Marsh and myself, the Operation Avalanche director complained about the difficulty young filmmakers have cracking the scene, saying the bulk of Telefilm’s financing is spent on the same old cabal of veteran filmmakers who are subsequently propped up in gala spots at TIFF.

What Johnson said wasn’t new: these conversations were taking place in living rooms across the country. He just had the audacity to let us publish what so many were thinking.

Then in April, Sleeping Giant director Andrew Cividino opened up about his issues with the system. In an interview with Johanna Schneller, Cividino revealed that his film, which Telefilm regularly parades around as an example of their success with new filmmakers, was actually declined production funding. Telefilm came along after the fact with finishing funds when it looked like Sleeping Giant could end up at Cannes. This isn’t a unique scenario.

While everyone was complaining, TIFF was quietly planning its own response: they would give the controversy a microphone. On Friday morning, they hosted Breakfast at TIFF, the first in a new discussion series where industry members can debate the challenges faced by Canadian filmmakers. Artistic director Cameron Bailey moderated the inaugural session and invited Johnson, Telefilm’s Dan Lyon and filmmakers Kazik Radwanski and Ingrid Veninger onstage.

The audience quickly ditched the idea that this was going to be a polite and toothless Canadian conversation. With an engaged and involved room full of producers, distributors, programmers, publicists and filmmakers, the arguments were passionate, infuriating and enlightening. Eyes were rolling, arguments got loud and audience members brought a wealth of concerns to the table.

A major theme was diversity – if you think Hollywood has an issue with putting people of colour onscreen, you should know that Canadian cinema is practically snow white. They also discussed the decision-making process behind TIFF galas whether Telefilm should introduce an affirmative action to plan to bring female filmmakers to the fore (similar to the NFB’s new resolution) alternative options to filmmaking without having to wait for funding and whether having Telefilm behind your film is really in your best interests. The filmmakers onstage have all enjoyed a measure of creative freedom by operating outside the system.

I’m not going to go into detail about what was said because TIFF wants to protect the sanctity of that room, and I wholeheartedly agree with them. If the event was a thing of beauty, it’s because everyone was willing to vent openly without fear of repercussion for what they had to say.

And they can take comfort in knowing that Dan Lyon was hearing them. Even if some audience members were frustrated with Lyon’s recitation of Telefilm’s position on certain topics, having a representative there to listen to everyone’s concerns was essential and should be continued.

Hopefully, future sessions go higher up the chain than Lyon, who is handcuffed by a miniscule budget to oversee regional funding in Ontario and Nunavut. We need to hear from someone from the national office, which oversees the bulk of Telefilm’s cash flow. Who else could address the problems Matt Johnson first brought up so many months ago?

At the breakfast, Johnson whipped out pie charts that showed how almost 70 per cent of Telefilm’s budget for English-language productions went to a handful of films made at the national level by seasoned filmmakers and producers. Everyone else had to scrap for the leftovers.

Telefilm has always worked on a reward basis. The more you succeed, the more money they trust you with. And, as the data demonstrated, the funder dedicates the bulk of its budget on that top tier. It’s kind of like giving scholarships to doctors instead of to med students.

There is a valid risk-averse ideology at play here. Films by new talent tend to lose money. They are supposed to, as Johnson reminded everyone, since you need the opportunities to learn from your failures before you can succeed.  But most funding is dedicated to propositions that might lose less.

Veteran filmmakers are marketable, as are the casts that they can lure in to their films. The words “marketable” and “viable” were tossed around a lot at the breakfast. That’s what irks me the most, and I hope it will be discussed further at future sessions.

While Telefilm certainly dedicates significant resources to aid new talent, especially with the new microbudget program, its strategic plan lays bare that the biggest priority is to develop an audience for Canadian content by fostering a more commercial cinema. To do so, they aim for movies that have hopes of breaking even on the VOD market. That also looked better on paper when you had the Harper government leering over your back.

So if you aren’t making a movie with seasoned directors and recognizable stars, your pitch better have a logline that works like click -bait on Rogers on Demand, selling it as a comedy or a thriller.

That mentality is there from the top to bottom, and to me it seems like we’re missing the point of having access to an arts and culture fund. If we’re going to be using our tax dollars to help finance commercial products like The Right Kind of Wrong and yet another Trailer Park Boys sequel, then should we be subsidizing Lululemon too?

To foster commercial cinema means we’re competing with Hollywood, pitting a $7 million comedy against movies that have twice that for their marketing budget. And that focus on marketable products comes at the expense of nurturing new voices that can work the international film festival scene, where our next Egoyan or Villeneuve can be discovered.

So here’s hoping Breakfast at TIFF participants get to discuss what exactly we want from Canadian cinema and the government body that helps to shape it.

Should Telefilm prioritize the development of a representative cultural voice or instead serve as an industry stimulus package? And if we’re going to strive for what the industry deems “marketable” cinema, does that mean our films will continue to shortchange First Nations, minorities and women?