The rising stars play vampires in Byzantium, and they're a lot more alive than that girl from Twilight 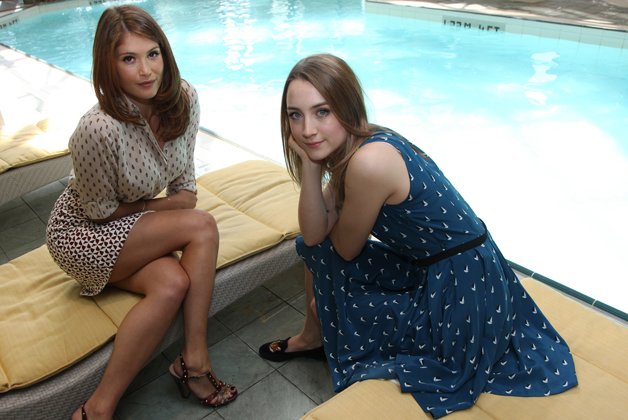 It’s Sunday afternoon and I’m finally getting a chance to have a conversation with Gemma Arterton and Saoirse Ronan in a private booth at the Maison Mercer.

The two of them kick off their heels and curl up beside each other, getting comfortable after a long day at TIFF promoting Byzantium. They star as vampires on the run in the new film from Neil Jordan, which premieres tonight.

They’re still giddy with excitement since this is the first day they’ve had the chance to talk about the film with the press – ever.

“We’ve been moving about a bit,” says Ronan, the Oscar-nominated actor from Atonement and Hanna. “And we’ve seen you everywhere we’ve gone.”

She’s right. This is the fourth time we’ve said hello, after a poolside photo shoot in the morning, a casual midday run-in on the street and an awkward incident just prior to our interview where the three of us ended up washing our hands together in a bathroom that turned out to be co-ed.

By this time I wouldn’t be surprised if they thought I was a stalker. I’m not (I swear) but if I were, I would pick more ideal prey than Arterton. In Byzantium, she relishes tearing men apart as Clara, a vengeful vamp punishing mankind for the way they treat women.

“It is a female empowerment movie,” says Arterton, who’s starred in Tamara Drewe and The Disappearance Of Alice Creed since breaking out in 2008’s James Bond reboot Quantum Of Solace.

Both actors understand if we’re all feeling a little genre fatigue after Twilight, True Blood and pretty much anything that has a poster with lusty looking teens.

“People go, ‘Oh really, another vampire movie,'” says Arterton, “and they have every right to think that because there has been so much.”

“There are elements that would remind you of vampire films that we’ve seen over the past few years,” adds Ronan. “It’s a teenage love story, but it’s about so many other things.”

The two stars smile when I assure them that this is a far cry from watching Kristen Stewart licking her lips over Robert Pattinson.

“That’s the biggest compliment,” says Arterton. “The instant I read it, I didn’t even think about (Twilight). It was better. It’s a reinvention of the vampire genre.”