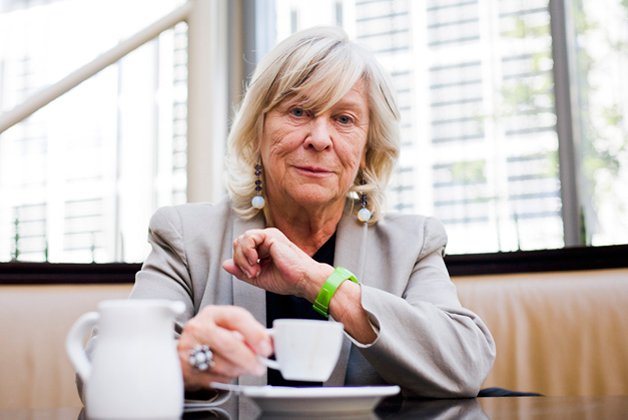 I can tell that veteran filmmaker Margarethe Von Trotta is nervous. She’s almost wringing her hands during our conversation about her TIFF entry Hannah Arendt.

“It’s the world premiere tonight,” she tells me. “Nobody’s seen it yet. I have no idea how people will react.”

I can see why she’d wonder. The film presents a sympathetic portrait of the philosopher who covered the Eichmann trial in Jerusalem for the New Yorker and didn’t come to predictable conclusions. The public wanted a monster. She gave them a sad bureaucrat who didn’t know how to think, let alone come to a moral conclusion.

And she wrote fearlessly – though for only 10 pages – about the Jewish Councils in Germany, who tried to negotiate with the Nazis rather than resist outright.

For both her ideas about Eichmann and her suggestion that Jews may have collaborated, she was villified by the intellectual community and abandoned by most of her closest friends.

But Von Trotta doesn’t want audiences to see only the fierce intellectual. That’s why she begins the movie with a conversation between Arendt and her best friend Mary McCarthy. They’re talking about love, sex and who’s sleeping with whom.

“I wanted to show that these women talked about all kinds of things, not just high-flown ideas,” says Von Trotta. “I read all of Arendt’s letters to Mary McCarththy and they were full of all kinds of gossip and discussion about their husbands and lovers.”

People who read the script were appalled by Von Trotta’s choice of first scene, preferring that the movie begin with Arendt’s bravura speech at her university, in which she passionately defends her case. Instead, Von Trotta puts that kick-ass speech at the end, making it the climax of the movie.

“It was put together from letters and other sources,” says Von Trotta. “I don’t think anybody’s every ended a movie with an eight-minute speech. Who does such a thing?,” she asks with a sly smile.