In The Lords Of Salem, the horror director takes a more avant-garde approach and lets some some cult screen icons bite into juicy roles 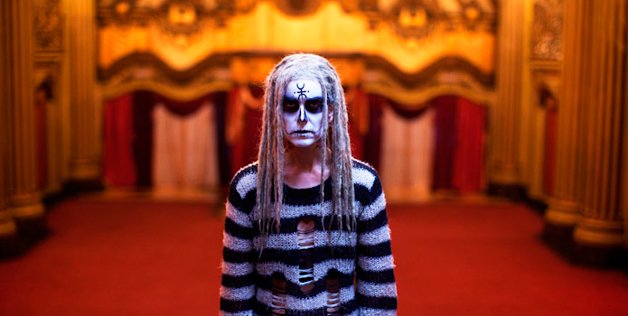 Shock rocker Rob Zombie has made quite the secondary career finding new ways to push the boundaries of good taste on the big screen.

With his fifth feature, the Midnight Madness entry The Lords of Salem, the director of House Of 1000 Corpses and The Devil’s Rejects goes a little more avant garde.

Zombie casts his wife Sherri Moon in the role of a Salem, Massachusetts radio DJ who becomes adversely affected by a mysterious noise rock record delivered to her in a spooky wooden crate.

One might expect this to be the jumping off point for grindhouse-styled thrills. But what Zombie’s produced feels more rooted in a love for 1970s auteurist cinema, something the director has wanted to tackle and experiment with for quite some time.

“I was always joking with everybody that it’s like Rosemary’s Baby if it were directed by Ken Russell,” Zombie says, on the afternoon of his premiere, with his wife seated by his side.

The almost impressionistic and ambiguous nature of his latest film doesn’t seem to surprise Zombie as it might his many horror fans expecting more of the same old studio product.

“I always liked those kind of movies because they don’t always have to make sense,” he says. “You have to think about them. And there’s just such a ‘thing’ now that everything has to make perfect sense. You see that all the time at the movies.

“With studios it’s meetings upon meetings and notes upon notes, and they just get so afraid that if the audience is confused for longer than 10 seconds that they’ll just walk out. I remember liking so many movies like that. Like Eraserhead. I mean, what the HELL was that? That’s why I loved it. I love movies that have a kind of mystery to them.”

None of that means that Zombie fully abandons what he knows best. There’s plenty of nudity and salty language in the film, and a moderate amount of gore, but Zombie also finally gets a chance to slyly poke fun at what a joke rock radio stations have become over the past decade.

“Radio has calmed down a little bit, but a couple of years ago it was almost impossible to do a radio interview,” he says. “It was like how we have it in the film where everyone is shouting or slinging sound effects and it never mattered what was being said. You can never make a point and you begin to wonder why you even bothered going. You just get defeated by it. Here that kind of behaviour has consequences.”

Returning to the more adult casting and tone that worked so well for him in Devil’s Rejects, he also offers a surprising number of pivotal roles to older actresses like Dee Wallace and Meg Foster. Getting the actors to agree to perform the sometimes racy material wasn’t an easy sell.

“I guess the script just seemed offensive to so many people, and a lot of roles were for older actresses in their 60s, which would seem like one of the most underused types of actors, and I thought that all of these women must be sick of playing the mother who hides in the background.”

The rejections from several actors didn’t faze him, however.

“I’m actually glad that so many people passed because we ended up with people that totally got it.”

One person even thanked him profusely.

“Dee Wallace even said, ‘If I have to play one more fucking mommy I’m going to lose my mind.”