TIFF interview: Submitting to The Master 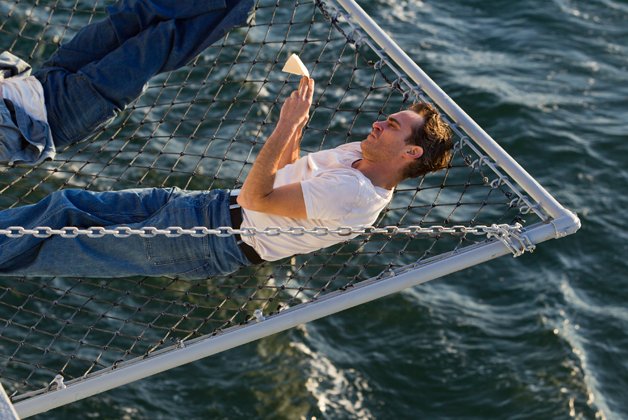 While waiting for the talent to arrive at the TIFF press conference for The Master, the room full of journalists is buzzing about what was going on at the Venice Film Festival. Just two hours before, conflicting reports were announcing that Paul Thomas Anderson’s masterful follow-up to There Will Be Blood was winning every award and none at the Lido.

Apparently the Venice jury headed by Michael Mann wanted to award The Master the Golden Lion (their best film prize) the Silver Lion (best director), and the Volpi Cups (Best Actor) for both Philip Seymour Hoffman and Joaquin Phoenix.

Hoffman plays a 50s-era religious cult leader who preaches about time-travel, and Phoenix his unstable pupil. Since festival rules limit the amount of major awards one film can win, the Golden Lion (Best Picture, remember) was instead awarded to Kim-Ki Duk’s Pieta.

Why the Venice jury would re-assign their top prize from their clear favourite as opposed to one of the secondary prizes was wrangling the press. We can only imagine that it was perplexing the talent behind The Master as well. Maybe that’s why the conference was delayed half an hour, so that Paul Thomas Anderson could take a moment to figure out exactly what trophies would decorate his mantle.

Oscar charmer Harvey Weinstein himself finally appeared onstage to our surprise, apologizing for the delay and blaming it on traffic caused by the “Jesus in the City parade.”

He may have been joking but there was something quite fitting about the idea that the promotion of his company’s movie about a rabid religion was hampered by Christians bent on “shutting down the city” (their words not mine, jesusinthecity.com).

When Anderson finally appeared onstage alongside Amy Adams and producer JoAnne Sellar, he didn’t seem to mind at all about the short-change at that other festival.

“It was amazing what happened in Venice,” Anderson said, showing no regret that he was in Toronto instead of Venice to collect his prizes. “Through our studies on this film we have gotten to where we can do time travel. I’m actually at two places at once. I’m at the Pizza Hut and the Taco Bell.”

Wait… does that mean Toronto is Taco Bell?

Anderson takes the well-deserved prizes (and non-prizes) gracefully but when one reporter asks him about the Oscar buzz his film has supposedly been getting he responds flatly: “Great. Fucking Great.”

The writer/director, who commands his own cult following, is smart enough to know that The Master is too challenging for the Academy to figure prominently in the Oscar race it’s also far too controversial since it’s “not” (but really is) based on the rise of Scientology, a word one reporter described as “an elephant in the room that also has lawyers.”

“The best part is that they gave it to both the boys,” says Anderson, referring to the double win for Hoffman and Phoenix.

“They are really strong hitters but they’re also team players,” he added, answering NOW contributor John Semley’s question about how the film never turns into a “scenery chew off” between two greats.

“Maybe the mistake of a young actor is to dominate something,” Anderson elaborates. “The sweet spot of a maturing actor is one who really gives over and knows when to squeeze in and knows when to slow down. That is more fun for everybody when you find a way to play together that services something else as opposed to a dick measuring contest.”

Noticeably absent from the press conference is Phoenix himself. Despite the fact that the erratic actor is in Toronto for the festival, somebody clearly thought it was a better idea to tuck him away somewhere after his disappearing antics at the Venice press conference. “He’s too unpredictable,” Anderson explained.

Fact is, Anderson didn’t really need anyone else on the panel to discuss his latest exploration in moments that define America. The film is set in the post-WWII era, a period he describes as “food and drink” in terms of story-telling opportunities. That was a time when optimism surrounding the country’s victory and potential for growth was haunted by all the costly deaths in war.

That’s where Scientology and other religions of its kind (in the film, it’s called The Cause) provide soothing answers by exploring past lives and offering escapist ideas like time-travel.

Anderson felt like he did a little time-traveling himself, not only by going for a classic look by shooting in 70MM film (the Lawrence Of Arabia format) but also by revisiting inspirational films from that era like The Best Years of Our Lives and Let There Be Light.

“I just keep TCM on all around my house, 24 hours a day,” he admits. “I put it on the kitchen and it’s always on. Even if I’m not watching anything, I just have it on, let it soak into your veins and wash over you.”