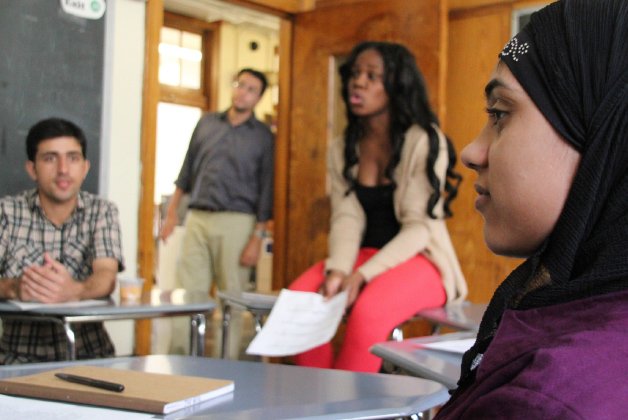 You can count on TIFF’s Next Wave Film Festival to liven up a bleary February weekend it’s the rare teen-oriented festival that refuses to pander to its young audience, gathering features and documentaries from around the world as well as an annual movie marathon and the 24-Hour Film Challenge.

The strongest entry I saw was Jean-Michel Dissard and Gitte Peng’s I Learn America, screening Sunday (February 16). A documentary set at Brooklyn’s International High School at Lafayette, where the student body is predominantly composed of recent immigrants, it’s a terrific year-in-the-life portrait that benefits greatly from its contrasting subjects, like the outgoing Sandra, a Polish teen whose gender-blurring fashion sense seems made for New York City, and the withdrawn Sing, a refugee from Burma struggling to adapt to his new country.

Tali Barde’s For No Eyes Only (also Sunday) pales in comparison to its direct antecedent, Hitchcock’s Rear Window. Even so, its tale of a bored high-schooler (Benedict Sieverding) who hacks into his schoolmates’ webcams and comes to suspect one of them may be a murderer nicely illustrates the schism between European and North American teen movies: it’s willing to depict its characters as raging hormone machines rather than quippy style machines.

G.B.F. (also Sunday), on the other hand, is all about quippy style machines, though we’re supposed to believe its characters are exclusively defined by their sexuality. Or at least that’s the problem as perceived by Tanner (Michael J. Willett), a closeted senior whose accidental outing – via smartphone app – makes him a must-have accessory for his school’s competing queen bees.

Clearly trying to recapture the glory days of his cult hit Jawbreaker, director Darren Stein plays up the montages and finely sculpted insults, burying whatever message might have been in George Northy’s screenplay. That said, there’s one wonderful scene of Megan Mullally watching Brokeback Mountain that makes the whole project seem worthwhile.

The annual movie marathon is a little tricky this year. The focus is on teen rebels, with Juno, Scott Pilgrim Vs. The World, Mean Girls, Rushmore and Donnie Darko screening in that order Saturday (February 15) afternoon and evening.

I’m not entirely sure that program makes much sense – never mind the tonal conflicts, it’s tough to argue that Scott Pilgrim is a movie about teen rebellion – but what the hell, good movies are good movies. Just pick the ones you like and enjoy yourself.