NOW MagazineNewsTolerant Toronto? Think again. Attacks on Muslim women are on the rise

Tolerant Toronto? Think again. Attacks on Muslim women are on the rise

New ads try to fight racism and Islamophobia in Toronto 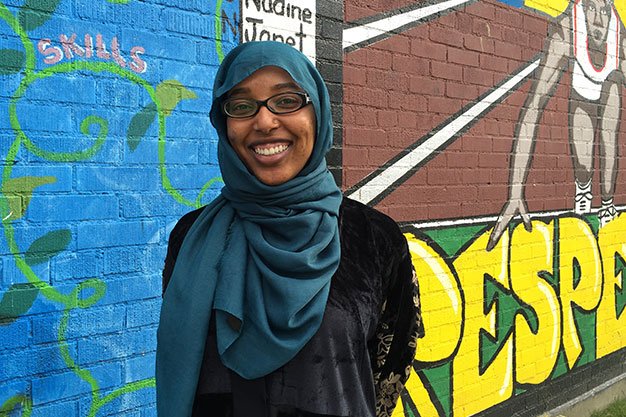 Despite having lived in Toronto for most of her life, Amina Ibrahim is often asked, “Where are you really from?” She typically laughs it off and explains that her family moved from Djibouti when she was a toddler, so really, she’s from Canada. The 26-year-old North York resident, who works for Toronto Community Housing’s Regent Park office, says questions and comments about her identity from other Canadians have been common all her life. Recently, however, she experienced a violent, racist attack that left her unhinged and questioning the diverse, tolerant city Toronto claims to be.

After work one evening in June, Ibrahim was driving her Honda Civic north on Broadview. As she approached an intersection, a truck driver behind her began laying on the horn, and when traffic came to a stop, a white middle-aged male exited his car and approached Ibrahim’s vehicle, where she had the window rolled down.

“First, he mumbled some Arabic words together, saying ‘Assalamu alaikum,’ and some other words he must have assumed were Arabic,” she recalls. The phrase is a Muslim greeting in Arabic and roughly translates to: peace be upon you. “Then, he said, ‘You’re lucky I don’t punch you in the face, you fucking Muslim.’ He stared at me waiting for a response, but I was so shocked that I just kind of smiled. He continued swearing and then walked away.”

When Ibrahim got home, she wrote about the incident on her Facebook page and received dozens of responses, some from friends who had gone through similarly traumatic experiences. “The fact that he thought it was okay, that I should be lucky that I wasn’t physically harmed because I’m Muslim is what threw me off most,” she adds.

According to a Toronto police report, overall hate crimes in the city decreased in 2015, but anti-Muslim attacks are on the rise. Last year, a total of 26 occurrences were recorded, but the majority of racially and culturally motivated attacks are rarely reported to the police.

Debbie Douglas, the executive director for the Ontario Council of Agencies Serving Immigrants, believes that the spike in anti-Muslim sentiment is directly tied to the arrival of Syrian refugees, whom many Canadians assume are all Muslim, as well as the rise of terrorist attacks globally.

“It didn’t help that during the last federal election, the volume on all of this was heightened given the Conservative’s campaign against the hijab and niqab,” she says. “The conversation quickly moved away from whether Muslim women’s rights were being infringed by having their religious head coverings to just blanket anti-Muslim sentiments.”

So earlier this month, in partnership with the City of Toronto, OCASI launched a campaign addressing Islamophobia and xenophobia. In one poster, a white man tells a Muslim woman, “Go back to where you came from,” and she responds, “Where, North York?” Beneath the depiction is the campaign’s slogan: “Muslims are part of Toronto.” 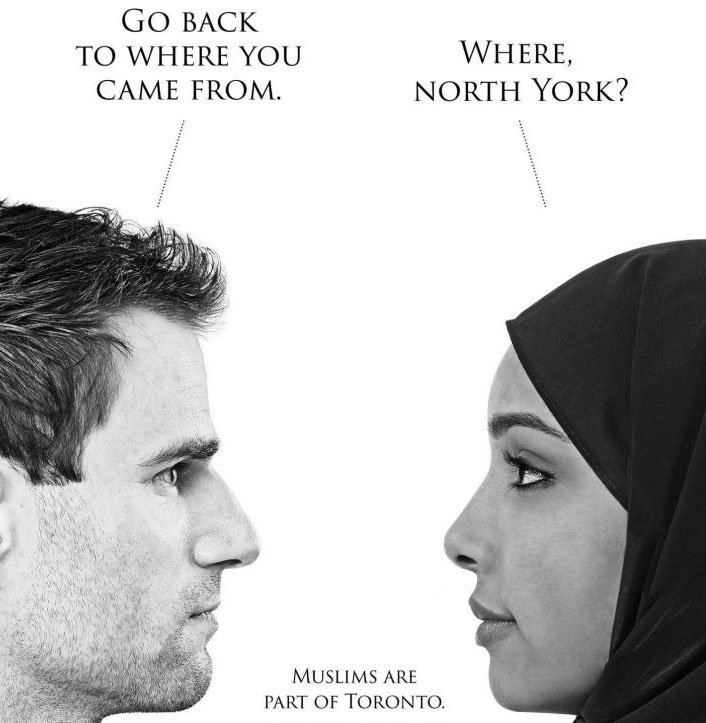 Douglas says that this type of exchange, while relatively benign, is typical not only for Muslims but for many racialized people living in Canada. In fact, when I first spotted one of the posters at a streetcar stop near Yonge-Dundas Square, my initial reaction (before reading the tagline about Muslims) was that it reflected my own experiences as an Asian-Canadian, despite being born in Vancouver. The belief that Canadians are white is still the prevailing notion, and people with different hair and skin tones must have come from somewhere else. In that way, Douglas hopes that these ads spark conversations across all marginalized groups.

“We must link our issues and pay attention to Islamophobia the way we pay attention to racism, homophobia and issues of sexism,” she explains. “For the most part, we’ve done a pretty good job at building social cohesion as a city that has a large racialized population. Yet, we must remember that there are still those pockets where hate and discrimination happens.”

In Toronto, those areas include Flemingdon Park, where a Muslim woman was brutally assaulted and called a terrorist when picking up her children from school back in November. Around the same time, several Muslim women were attacked in TTC subway stations and anti-Muslim graffiti was found on a GO Train. Then, just this month, a young Muslim mother was spat on, punched and had her hijab yanked by another woman while shopping with her baby at a London, Ont., grocery store.

“Whenever there is any sort of incidence in the media that happens whether here in North America or somewhere else in the world, we hear anti-Muslim sentiments,” Douglas notes.

She denies, however, that the timing of OCASI’s campaign is a response to the recent Orlando massacre, where the gunman claimed ties to radical Islam. Additionally, she says anyone who accuses the campaign of reverse-racism (which frankly, doesn’t exist), is completely misguided.

“The whole idea that this ad is somehow demonizing white men is kind of surprising,” Douglas adds. “This ad really isn’t about the issues of white people. It’s really about the experiences of racialized immigrants and refugees, in particular Muslim women. Is it only white men who are Islamophobic? Absolutely not, but we use the image of a white man as a way to also talk about power relations.”

Ibrahim, who hopes that her violent anti-Muslim confrontation was a one-off, appreciates the ads and says Canadians need to talk about racism that goes on in this country. We often think that racist sentiments and attacks happen elsewhere, most notably in the U.S. and post-Brexit Britain, and we associate Islamophobia with bans on the hijab, niqab and burka in countries like France. But racism and intolerance is here at home, and it affects dozens of Canadians everyday.

“Being Black, being Muslim and being a woman, I’m kind of a minority in every category. I experience subtle racism all the time,” she says. “People always think that Toronto is a diverse community, but these dialogues we’re having are important. The more people talk about it, the more we realize it’s actually happening here. Then, it’s our choice if we want to continue this way.”