Now that he's famous, awesome actor can sink his teeth into some pretty juicy roles 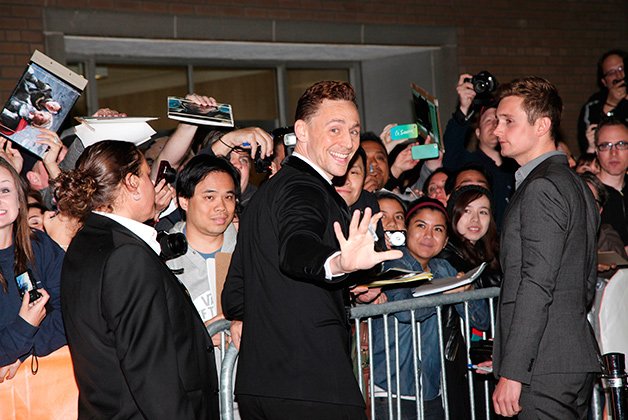 Tom Hiddleston is amused by my voice recorder.

I’ve sat down with him in a quiet room at the Intercontinental in the middle of a busy Toronto Film Festival press day, and he’s intrigued by the boxy digital device I’ve pulled out of my bag.

“I’ve done your job actually, recently,” he says. “I interviewed Natalie Portman for something. It was, like, an hour-long chat, and I had to transcribe it the next day – and I was like, ‘Jesus!'”

Don’t you have people for that? I ask him jokingly.

He shakes his head and laughs. “No.”

I can think of several dozen fans who would have offered to help him out. In recent years, Hiddleston has become not just a movie star but a full-on heartthrob thanks to his breakout portrayal of the emotionally volatile Loki of the Marvel universe.

The unassuming English actor’s magnetism has been evident since his very first feature in 2007, Joanna Hogg’s terrific British drama Unrelated, but when Kenneth Branagh cast him in Thor, Hiddleston was catapulted to a new level of stardom.

But right now he’s kicking back in Jim Jarmusch’s Only Lovers Left Alive, in which he plays Adam, a louche Detroit-dwelling vampire in a centuries-long relationship with Tilda Swinton’s formidable Eve.

Hiddleston had a ball building his character’s deep, thoughtful backstory with his collaborators.

“Jim and Tilda and I met for about two weeks, six weeks before we shot,” he says. “We sat around a table every day and talked about poetry and music and science and literature and nature. We read each other Rumi and talked about Einstein’s theory of entanglement and Hamlet and the White Stripes and Fibonacci.

“It was just an amazing time of sharing all the things that we loved, filling ourselves up with so many references that we were then happy to drop, because we knew what we were talking about. You see only a third of what we came up with, you know.”

Next there was the physical aspect of the characters. The actor quickly credits Jarmusch with the frazzled, unkempt hairstyles that distinguish the movie’s undead.

“He was very keen on that,” Hiddleston says. “Hair was one of the first things we talked about. He wanted them to look like strange creatures with a feral beauty – they were sensitive and refined and sophisticated and artistic, but they were not human. They were vampires.”

All that preparation and research paid off in a performance – and a movie – that defies classification and is filled with moments of weird, unexpected comedy.

“I was simply trying to play it truthfully, but also understanding that if Jim laughed, it was good,” he says. “That kind of deadpan humour – or any humour – still always comes from the truth. You’re playing these high stakes for real, but you’re playing them to such a degree that there’s an oddness to it which is funny, I hope.”

Tom Hiddleston on whether Tilda Swinton and David Bowie are secretly the same person:

Hiddleston on making his film debut in Joanna Hogg’s Unrelated, and what Natalie Portman told him about first features: