Meet the G20 detainee running against Bill Blair in Scarborough 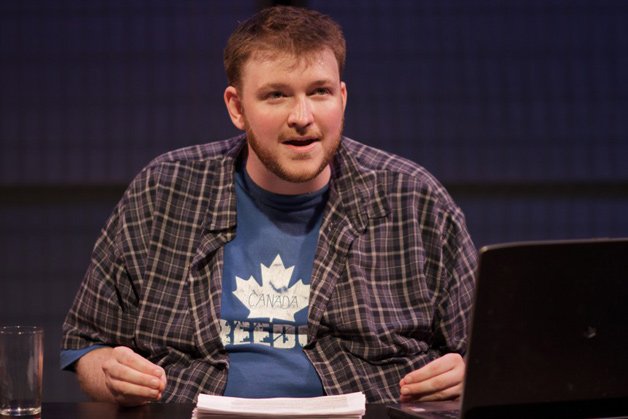 The G20 turned Tommy Taylor into an activist. A theatre artist who was arrested outside the Novotel hotel and caged at the detention centre on June 26-27, 2010, he recounted his experience in an epic Facebook note that he later adapted into a monologue play, You Should Have Stayed Home it toured across the country in 2013.

In the show’s climax, Taylor describes the brusque indifference with which then-police chief Bill Blair greeted him in their one and only encounter, two years after the summit.

They will now, however, likely come face to face again.

After three rounds of voting on Tuesday night, the Green Party of Canada nominated new member Taylor to be their federal election candidate in Scarborough Southwest, where Blair is running for the Liberals against NDP incumbent Dan Harris. Taylor plans to make sure the ex-chief doesn’t get an easy ride.

“It definitely will be a race where we talk a lot about civil liberties,” he tells NOW. “Obviously, the Greens are known for just sort of being about the environment, but there’s a whole lot of democratic and electoral reforms in there, some pushes for accountability that are right up my alley.”

In June, Taylor organized an event commemorating the fifth anniversary of the G20, which included a panel discussion linking that weekend’s violations to the current issues of Bill C-51 and carding. It inspired our recent cover story about how many people caught up in the G20 were transformed by their first-hand taste of injustice, with a quote from Taylor serving as the thesis: “What a lot of us have come to discover since then is that for some communities, particularly in this city and even across Canada, it’s G20 rules every day.”

NOW got a hold of Taylor late Tuesday, as he headed back from the nomination meeting to his home “on the Regent Park / Cabbagetown border.” We’ve edited and condensed the conversation.

So what prompted you to seek the Green nomination in Scarborough Southwest?

Well, obviously when Bill Blair was announced back in April, I had a lot of concerns over that. And one of the things that I had heard, and have heard for a long time, is, “Well, do something about it.”

There are certain issues that I feel aren’t being addressed. Everyone seems to be pussyfooting around things. Beyond the G20, there’s the lack of accountability and lack of transparency at the federal level. For me, Bill Blair being run by the Liberals just became emblematic of a number of problems.

I mean, forget the fact that it’s incredibly, incredibly insulting for the party of the Charter to run the man who supports and endorses carding, which is a daily violation of the Charter that happens in this city. The main fact, I think, and one of the things that disturbed me the most, was reading that article where Bill Blair was praising Bill C-51 and talking about how he would like to see the powers of preventive arrest expanded. I have an arrest sheet at home that says “it appeared Thomas Taylor was going to commit Breach of the Peace, so a preventive arrest was made.”

I’ve seen Bill Blair handed the powers of preventive arrest, and so have a thousand other people in this city during the G20. The fact that that power is already abused, and the fact that he wants expanded powers and less oversight – I think he’s already proven to us that he can’t be trusted with it. And this is who the Liberals are having out there talking about their support for C-51.

Some people would also say, “Well, C-51 is about terrorists.” Well, guess what, Bill Blair’s commander said everybody in the street at the G20 was a terrorist. And that’s what Bill C-51 is about. We’ve seen it abused before. He’s definitely a candidate that embodies a whole bunch of issues.

Could you describe your previous interaction with Blair?

So when the OIPRD (Office of the Independent Police Review Director) report on the G20 came out, the official investigation that validated what everybody had been saying – all the violations and unlawful arrests, all validated – I was at the press conference where they released the report and found out that afterward Bill Blair was holding his own press conference to react. And I don’t know, I just had to go down there because what I discovered at the OIPRD meeting was that it was actually gonna be up to Bill Blair to lay any of the charges they recommended or implement any of the changes. It was actually now being handed back to him. That concerned me, and I went to his press conference, and Bill Blair came out and he said that he 100 per cent endorses the OIPRD report, he stands behind it, the buck stops with him, he’s responsible — all of these things.

We got to the point where he took questions, and I waited ’til there was a pause and then I spoke up. I wasn’t too sure what I was gonna say, but I had to say something, and I just stepped forward and said, “Chief Blair, my name is Tommy Taylor. My wife and I were arrested two years ago at the G20 and held in the detention centre. At the time, you told us, Chief, to take our complaint to the OIPRD. And we did. And now two years later, this report’s out and, I don’t know: please apologize.”

I was just asking for an apology – obviously there’s so much more that needs to happen, but that just seemed like somewhere to start.

And he kinda half-smirked, and he looked at me, and he said, “Excuse me. This is not your press conference.”

But I was quoted in the OIPRD report in several places. There’s at least 15 pages of my testimony in that report, and that was a press conference about that report.

I’ve never forgotten that particular interaction, because it speaks to that sort of entitled attitude. It reminds me now of Julian Fantino running away from the vets when he didn’t want to answer to them. The only authority he seems to respect is his own.

If you found yourself opposite Blair in a debate, what would you like to pose to him?

How he could possibly argue that he is what Ottawa needs when every civilian and public oversight body has complaints naming him and has complained about how he is just absolutely not interested. Some people, in fact some public representatives, have said that he has been insubordinate. This is not the kind of change that I want to see in Ottawa. So I guess I would want him to address why the public should trust him to be honest and do the right thing, when every professional and public oversight body has condemned him.

How do you feel about the NDP incumbent, Dan Harris?

Dan Harris seems like a great guy, but Bill Blair’s been in this thing for a couple months now, and Harris has had every opportunity to say what he thinks, maybe ask him tough questions – and I think the NDP, like the Liberals and like the Conservatives, they all have stars in their eyes and they think they’re gonna take this, right? And that means a lot of compromise, that means a lot of playing it safe. I don’t think that’s what we need more of. We definitely don’t need more playing it safe we need some people to be straightforward and honest.

I think that some people would view Bill Blair as an intimidating figure. And I’m beyond viewing him as intimidating at this point.

And it’s because of the G20 that you’re involved in politics in the first place, correct?

Well, hey, I was a straight white kid from the suburbs of the GTA, and then the G20 happened and that was a wake-up call. That knocked me upside the head.

After that, I began a lot of work. I started an internship shortly thereafter at Amnesty International, fighting for human rights around the globe, doing fundraising for them. Started working as a fundraiser for other not-for-profits like CAMH. Rather than just doing theatre, I started expanding what I was doing, and that led to being a political-advocacy fundraiser for groups like OpenMedia and Leadnow. So I’ve been in political-engagement mode since then.

And what I’m hoping is that I can help wake voters up without having to put them in a cage like what was done to me.