Modern Japanese, street food snacking and a spot only accessible by elevator 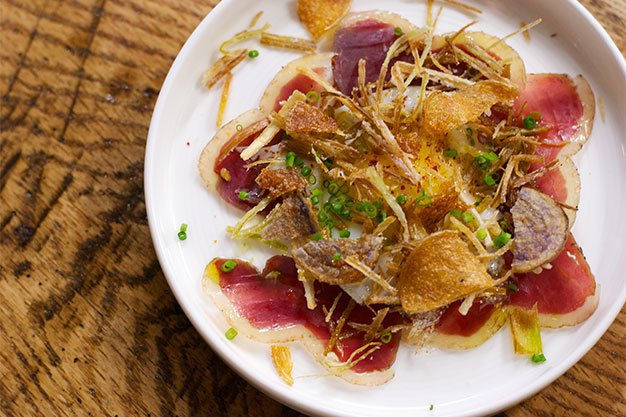 With a couple of basic kitchen appliances and a dream, Dave Mottershall made Loka Snacks, in a back corner in a Riverside bar, into a cult-favourite restaurant. (It didn’t hurt that he also had hookups with local farmers for seasonal ingredients, a friendly demeanour and preposterous culinary chops.) Thanks to considerable community goodwill ($40K worth, to be exact), Mottershall was able to crowdfund a new spot at Queen and Bathurst, finally giving him much-merited room to experiment. The menu is revised subtly every day, like one of those change-one-letter-at-a-time word puzzles, to accommodate new ingredients and changing seasons, but the chef’s acute sense of balance for textures and flavours never wavers. 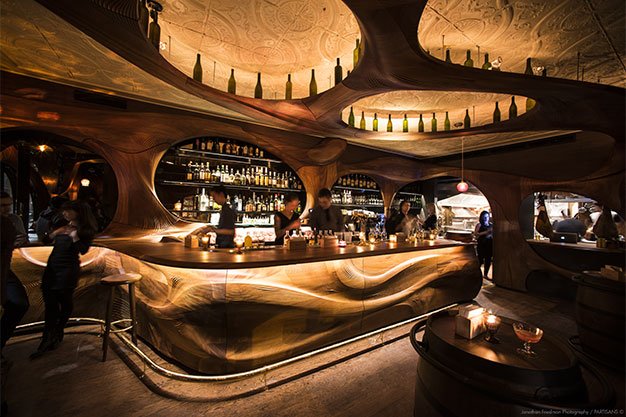 Much has been made of Grant van Gameren’s pintxos bar since it opened in February, and I’d call the hype bloated if it didn’t accurately reflect every dining experience I’ve had there. The famed undulating wooden walls are both elegant and cozy. The menu of pintxos and tapas gently coaxes maximum flavour and impact out of each ingredient: the sweet, briny anchovies perched atop the tortilla espagnola at breakfast the slab of housemade bread that soaks up the heavenly garlic butter dripping off the “mushroom tower” skewer even the preserved seafood served right from the tin. Cocktails are great so is the coffee. Little wonder competition is still stiff for a “seat” (so to speak, since half the place is standing-room) almost a year later. 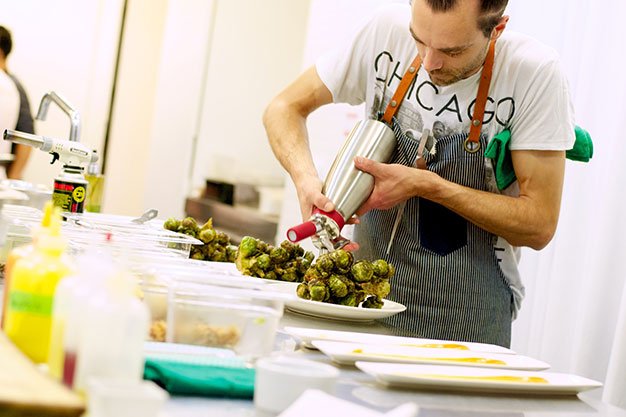 After making a name at Bar Buca, Mamakas and Montreal’s Sugar Shack, Danny Hassell finally got the opportunity to take centre stage when the basement kitchen in the Templar Hotel was overhauled into a showcase for his talents. He zeroed in on a global mix of flavours with a smattering of game meats (hello there, horse tartare) and a Quebecois twist, making sculptural showstoppers out of a chicken leg stuffed with five-spice-laced sausage, a salad plate-sized ravioli stuffed with unctuous duck and topped with blowtorch-seared mascarpone, or a curl of octopus perched atop a marrow-filled slab of bone. It all looks almost too good to eat, but you really, really should. 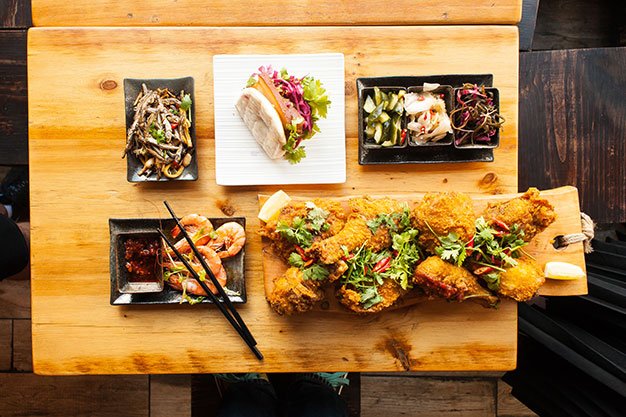 You know you’re in a special spot when even the edamame draws ecstatic eye rolls from your dining party. I saw it happen earlier this year, several months after this rowdy Taiwanese-ish spot at Carlton and Parliament opened, when a bunch of friends I hauled in for dinner took the soy-garlic butter-drenched soybean pods, scraped out the beans with their teeth as per usual – and then sucked the empty husks back to a clean green. The other runaway hits of the evening: flash-fried brussels sprouts amped up with citrus, soy, chili, pork belly bits and a drizzle of kewpie mayo, and a smushy bao ready to be dipped in Pop Rocks-laced condensed milk. Sure, there are tons of other things on the vast and wallet-friendly menu worth ordering – Hakka-derived stir-fries, Toronto-standard deep fries, dirt-cheap booze – but making a silk purse out of a sow’s ear (literal pig ears, in the case of one dish) is one of the hallmarks of a great kitchen. 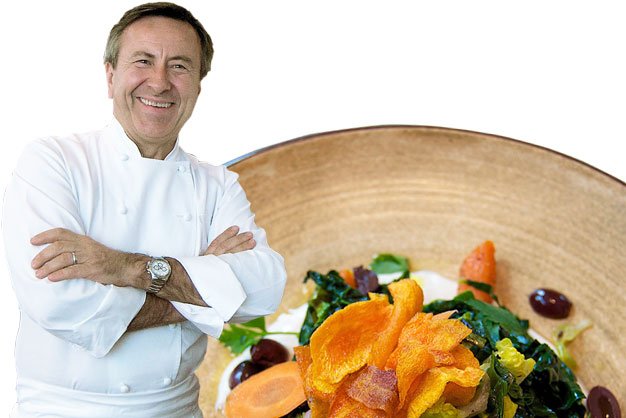 Reading old reviews of Cafe Boulud makes you sorry for the wasted time celebrity chef Daniel Boulud’s eatery at Yorkville’s Four Seasons hotel spent as a glacial, uninspiring spot plastered with tacky pop art. Finally, after arriving back on the scene one $2 million renovation later, the café is living up to its potential as an upmarket yet relaxed French brasserie. Grillades (roast chicken, ginger-buttered lobster, even pineapple for the dessert menu) are uniformly marvellous thanks to a rotisserie brought in from the motherland. Occasional forays into global cuisine, like a take on beef pho or a Middle Eastern-spiced salad of grilled kale and carrots, are equally delightful. And, as you might expect, the service is flawless.

“We have room at the bar – the dining room is occupied tonight,” the host tells me from a nondescript vestibule off Queen and Spadina before I ride the elevator up to Alo. I know that already, because the dining room, where chef Patrick Kriss unfurls nightly tasting menus, is booked solid into mid-February. Blame the universal praise for Kriss’s classically French inspired cooking (shredded foie gras heaped in broth, a burrata-like creation fashioned from milk skin, even a heartbreakingly good bread course) that has wafted out of the third-floor kitchen since its opening this summer. But the Johnny-come-latelys can still perch at the bar and avail themselves of an à la carte menu, five-star service and stellar cocktails. That menu currently features one of the city’s best beef tartares (made from beef so robustly flavoured, it tastes like a seared steak without ever coming close to a flame) or a brisket the texture of caramelized pork belly, with doughy little potato flatbreads to soak up the jus – just one of the many, many details Alo has down pat. 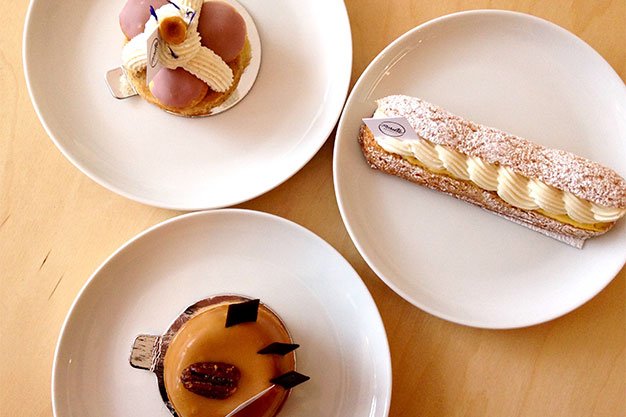 There’s love in every single one of the desserts at this tiny Corktown patisserie. Just ask co-owners Bruce Lee and Stephanie Duong, who met in the George Brown culinary program, travelled the world together racking up resumés full of Michelin-starred restaurants and landed back in Toronto with a wedding in the works. That kind of heart helps, but it’s really the flawless French technique at the centre of each recipe that makes the pastry roster at Roselle such an impressive achievement. The caramel and Valhrona chocolate tart, inspired by a deconstructed Turtle candy, reinvents itself with each bite, while the delicate banana cream pie eclair gets massive flavour from a thin layer of flambéed fruit. Recently, they’ve made forays into savoury eats like soups and ultra-buttery galettes. Look for big things to come from Roselle, even if you don’t have a sweet tooth. 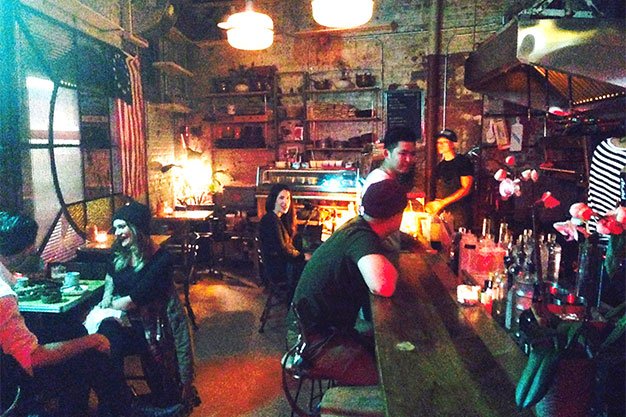 Dining at Oddseoul co-owner Leemo Han’s latest spot is like hiding out in a secret clubhouse. Its unmarked entrance just off Dundas West is swathed in corrugated metal, with dim candlelight the only welcoming touch inside. The spareness either cements Hanmoto’s cool cred or tries way too hard, depending on who you ask – but that’s a secondary concern compared to Han’s menu of delicate Japanese fare disguised as indulgent bar snacks. Because this is Toronto, a sloppy curry-coco bun sandwich and the dyno wings, Medieval Times-worthy chicken hunks stuffed with pork and dressed with nori and chilies, have received the most attention. But the menu is full of careful compositions and clever twists, including a Rubik’s Cube of a dessert built around umami/sweet miso ice cream. When a dish makes your head spin like that, who cares about atmosphere? 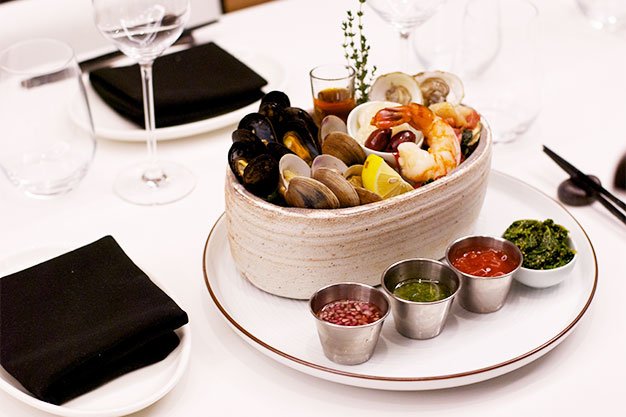 Toronto’s sushi lovers already have plenty in this city to keep them sated, from jaw-dropping omakase menus down to $4.95 spicy tuna rolls, so it was up to West Coast newcomer Miku to show us something we hadn’t already seen. The luxurious sushi chain delivers in spades in its first Toronto outpost, nestled into the southernmost end of the Financial District, which opened this fall. In a modern, gleaming-white environment where deep-pocketed diners can sample one of the city’s most comprehensive sake menus, the kitchen turns out watercolour-gorgeous platters of succulent sashimi and elegant (if fussy) mains like miso-laced sablefish and lobster. Its signature is lightly blow-torched nigiri served on pressed rice, with a hint of rich sauce layered in for maximum melt-in-your-mouth effect. It’s not the first place in town to do sushi “aburi-style,” but its stately take on Japanese cuisine is absolutely worth experiencing.

An earlier version of the story incorrectly stated that Bar Raval opened in January of 2015, and that their bread is supplied by Woodlot. We regret the error.