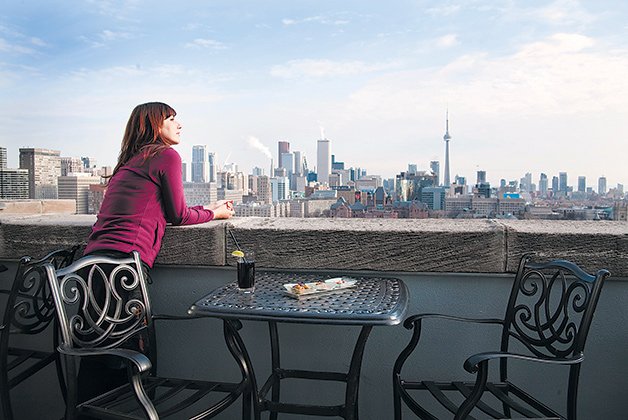 A fraction the size it was back in its 70s heyday when it was the roof of the Park Plaza, the small 18th-floor patio on top of the Park Hyatt Hotel is the perfect spot to relive the Rat Pack/Mad Men past. But first you have to get there.

Oh, sure, you could just waltz right through the historic hotel’s lobby like a tourist, but the cocktail cognoscenti take a more clandestine route. Push through the door of the anonymous office building at 180 Bloor West and approach the elevators. Take the door on their immediate left, make a right, go through that door, make another right until you see a second set of elevators. Push “18” and, after a 10-second ride back in time, you’re there – 1965, to be exact.

There are mixed nuts to nibble and Cuban cigars to be smoked. Drinks are strictly old-school, too, classic martinis and good old Scotch on the rocks the tipples of choice.

“In other words, the same thing they serve at hipster bars,” laughs long-time server Noel Devlin, proving that everything old is new again.

The Taj Mahal of Little India is finally finished!

A decade in the making, this sprawling family-run Pakistani resto might not be as quirky as it was when it was little more a plywood shack and a series of interconnected trailers decked out with sari fabric and strings of bare light bulbs, but the grub’s as incendiary as ever. Shame they still serve it on styrofoam plates.

You still place your order at the counter, where they give you a number to place on your table. Food-runners still race about the 400-seat tented patio, their trays loaded with sizzling platters of fish, chicken tikka combos and “naan bread” straight from the tandoor oven. Take the advice printed on the back of their black T-shirts: “Try the lamb chops.” And you want the house-made pistachio kulfi ice cream, too.

As you leave, don’t forget to take a selfie in the rickety rickshaw out front. It’s tradition.

Sunday to Thursday noon to 1 am, Friday and Saturday noon to 2 am. No reservations on patio. Unlicensed. Access: barrier-free.

Synonymous with flaming saganaki and souvlaki on a stick, the Danforth’s GreekTown is also home to John Maxwell’s most cosmopolitan of saloons. Past the well-worn wooden booths, Venetian blinds and vintage Wurlitzer jukebox, find this extremely popular 90-seat backyard patio, sheltered from the sun by an immense weeping willow that was named best tree six years running by the readers of North America’s largest alternative weekly.

The attractions are manifold at this beloved east-side watering-hole – an all-VQA Canadian wine cellar, more than 200 single malts by the glass and an upscale pub-grub menu that globe-trots from Subcontinental curries to Irish-style lamb shank braised in Guinness and a not-so-secret secret hamburger. But we’ll be back for the nightly barbecue, if only for the Jurassic provimi veal chop and the baby back ribs.

Established in 1833, the Bull is perhaps the granddaddy of all local patios. But it took till the late 70s – the 1970s – when the original Queen West arts-music scene was starting to bloom, for the workingman’s pub to get one, though it was just a couple of picnic tables in the parking lot. Legend has it Robert Plant sipped a pint here one sunny afternoon back in the 80s and nobody made a fuss.

Since then, the patio has expanded to some 200 seats, the beat-up picnic tables replaced by fancy-pants tables and chairs. With its front-row view of the passing human parade and the CN Tower off in the distance, the Bull’s almost always full.

The booze selection is much as it ever was – beer, beer and more beer – and the kitchen sticks to serviceable pub-grub “classics” like chicken wings, cheesy nachos and nearly a dozen different burgers. Shame about the frozen fries that come with them. Our resident restaurant critic advises you to avoid the Hawaiian pizza.

Daily noon to 2 am. Closed some holidays. No reservations on patio. Licensed.

Forty-six years ago, when Toronto the Good considered drinking outdoors the work of the Devil, the Dip was our first taste of la dolce vita – sunshine and wine, the more of both the merrier.

We’ll be the first to admit that the three Ps – pasta, panini and pizza – aren’t always up to Libretto, Terroni or Mercanti standards, but no one ever complains about their price, not when a whole grilled rainbow trout with a side of salad or pasta sets you back all of $13.50.

Show up Thursdays when martinis are half-price or any time during the imminent World Cup, when a bucket of five iced Amsterdam Blondes is a wallet-friendly $16. All this and a new retractable awning, too!

Sunday to Thursday 8 am to 1 am, Friday and Saturday 8 am to 2 am. No reservations on patio. Licensed.