Cinema and cannabis have long had a codependent. 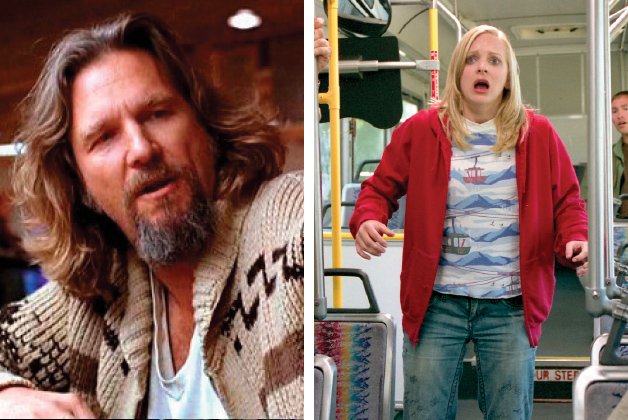 Cinema and cannabis have long had a codependent relationship. I’d swear my first theatrical screenings of The Rocky Horror Picture Show and Cheech & Chong’s Up In Smoke were held in Smell-O-Vision. But far too often, comedies are content to trot out a stoner for a cheap laugh and nothing else. These five films use pot for more than a punchline.

Joel and Ethan Coen’s comic mystery is cushioned in marijuana smoke, with its blithely baked buddies flailing through an increasingly insane miasma of rug desecration, blackmail and possibly even murder.

Smiley Face is a delightful comedy about Jane (Anna Faris), a very nice young woman who makes the mistake of snacking on pot cupcakes before heading off to an audition and spending the rest of the day in a state of demented bliss while her life falls apart around her. It should have made Faris a star, but the marketing convinced audiences that it was just another dumb stoner comedy.

Four years after testing out the idea of a no-concept comedy in Dude, Where’s My Car?, director Danny Leiner perfected the formula in this charming, demented buddy picture. John Cho and Kal Penn are perfectly paired as the hungry, hungry heroes, exhibiting both the mild paranoia of a prolonged high and the weirdly protective instinct that pothead bros have for one another.

In addition to the sheer pleasure of watching Dave Chappelle and his buddies goof around in some brightly lit Toronto locations, Tamra Davis’s comedy has a weird integrity in its depiction of marijuana enthusiasts as a singularly self-absorbed bunch. And Jon Stewart looks so young and moussed, like a perfect little MTV man.

Incredibly, Dean Parisot’s ingenious sci-fi satire gets even funnier once you learn the motivation behind Tony Shalhoub’s performance: his character, Fred Kwan, snuck out for a joint just after that ribbon-cutting ceremony, and he’s baked out of his gourd during the entire adventure.