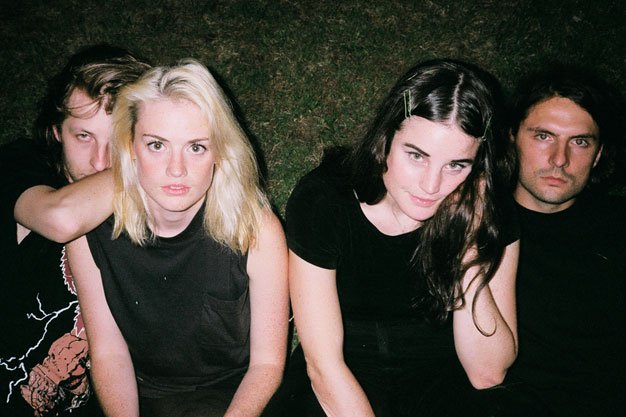 Frontwoman Jane Penny discusses being introverted and the challenge of starring in the music video for Outside.|Penny discusses how she found her unique voice.

Before you can place those whirling guitars and lush synth lines, it’s Jane Penny‘s voice you recognize. In the same breath, the TOPS frontwoman’s voice swerves from quietly singsong to nasal yelp on the verge of cracking, before turning into a melancholic, sultry coo.

Penny chalks up her distinctive style to having spent a lot of time singing alone, with no one to show her the right way to do it.

“Honestly, I think the big reason why it sounds unique is because I never had any training,” she says over Skype from Barcelona, where the Montreal band is wrapping up a European tour. “I never sang in a choir, where it’s all about blending in versus standing out.”

Penny discovered her voice when her long-time friends David Carriere and Sean Nicholas Savage asked her to sing in their synth pop band, Silly Kissers. After that project disbanded, Penny and Carriere, along with drummer Riley Fleck, formed TOPS in the spring of 2011, becoming one of the core bands in the much-mythologized Arbutus Records loft scene. (Bassist Madeline Glowicki joined in 2013.)

When TOPS released their first album during the height of Grimesmania in 2012, Carriere says the band “was trying to accurately represent what we were all about, without any gloss or frills or gimmicks.”

Their September-released sophomore record, Picture You Staring, continues that idea. It’s 80s-inflected soft pop that manages to be inspired by Berlin’s Take My Breath Away and Sade without sounding hokey.

And they focused more on production this time around. Holing up at the Arbutus HQ studio, they recorded the album through a big old mixing desk and had plenty of time to ruminate on bass parts and melodies without pressure from the label.

As much as Penny is the voice of the band, she’s also a co-songwriter alongside Carriere (who says he’s never met anyone with her sense of melody), co-producer and the mastermind behind many of their music videos.

“I think women have always been very much valued for their voices and personalities,” Penny says. “But there’s been a whole system [built and operated] by men that you’ve been supposed to work within.

“But these days [women] don’t have to just put their voice on top of something that’s created around them. We can do things all on our own.”

Penny discusses how she found her unique voice.