The Toronto visual arts community chooses its favourite shows of 2016

We surveyed artists, curators and our own writer to see which 2016 shows moved them most. Their answers reveal an immense range of artistic visions. 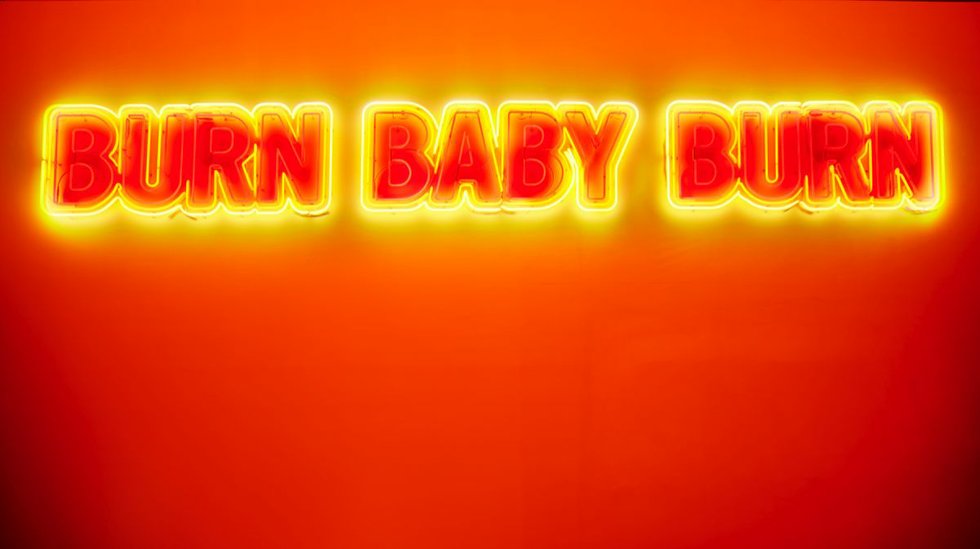 Courtesy of the AGO

Andy Fabo's The Craft Of The Contaminated

MILADA KOVÁCOVÁ Circulation manager of photography journal Prefix, whose fall/winter issue, with the theme Scanning The Archives, is on stands now. Next up at Prefix gallery is a Circuit Gallery show of photos by Philip Cheung, January 12 to February 4.

My choice for best show of 2016 is Theaster Gates: How To Build A House Museum (Art Gallery of Ontario, July 21 to October 30).

One of the most important criteria for a successful installation is whether it activates the space. This was the only time I have experienced an exhibition at the AGO that actually activated and enlivened the fragmented layout of the fifth floor. The closing day featured breakdancers and a huge dance party.

The installation massaged the audience members’ experience of pop culture while covertly conveying a political message with music by the Trammps (Disco Inferno) and Frankie Knuckles. Gates’s artistic practice continues to push boundaries for all, not simply the art-goers.

Impressed is an understatement for how I felt after the stunning performance by k.g. Guttman (I ask the audience to close one eye, at Blackwood Gallery, September 16 to 18), presented as part of Blackwood’s brilliant program Running With Concepts: The Choreographic Edition.

The work brought together Guttman’s unique research as a choreographer and thinker of both civic and intimate space, somehow seamlessly guiding audiences on a journey back and forth between gut-wrenchingly beautiful affective experience and rigorous critical thought.

I was so blown away that now Guttman is starting a longer-term relationship with Gallery TPW, beginning with the inclusion of a book work in our January exhibition and culminating in a solo show in 2018. 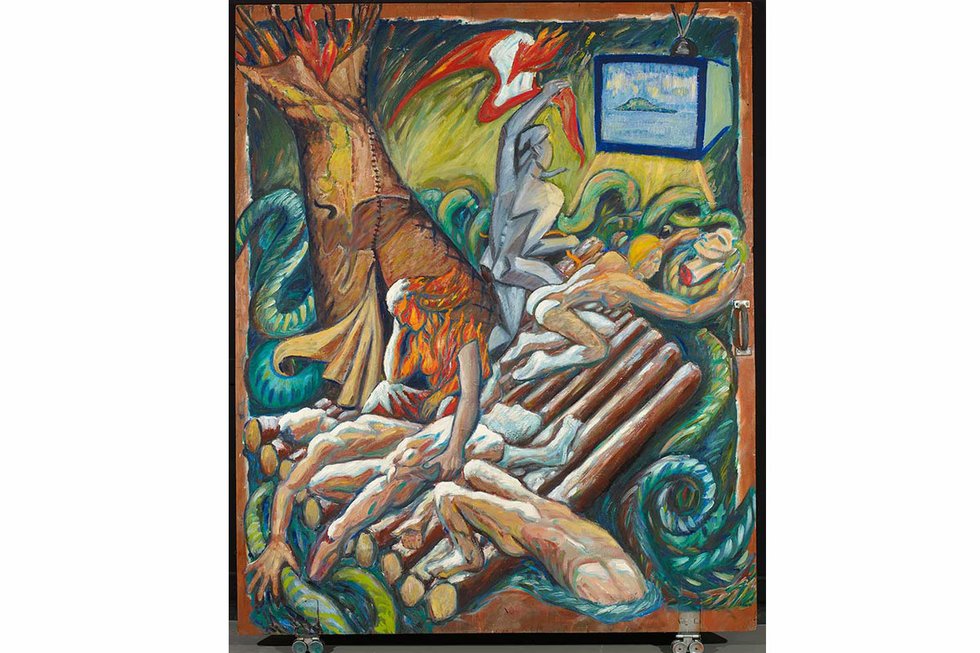 LUIS JACOB Artist/curator. Form Follows Fiction: Art And Artists In Toronto, curated by Jacob, closed at the Art Museum at U of T on December 10. His solo show comes to Gallery TPW in May as part of Contact Photography Festival.

It’s 2016 and the AGO hadn’t done a Toronto-themed group exhibition in 32 years! Curator Wanda Nanibush made an impressive first stab at redressing this long-standing institutional blind spot with the show Toronto: Tributes + Tributaries, 1971-1989 (at the AGO, to May 7). The exhibition assembles more than 100 works by 65 artists and artist collectives (paying “tribute” to their accomplishments) and includes many of the Indigenous artists and artists of colour that shape Toronto’s dynamic culture (unearthing the vital “tributaries” so often buried by art historical narratives). 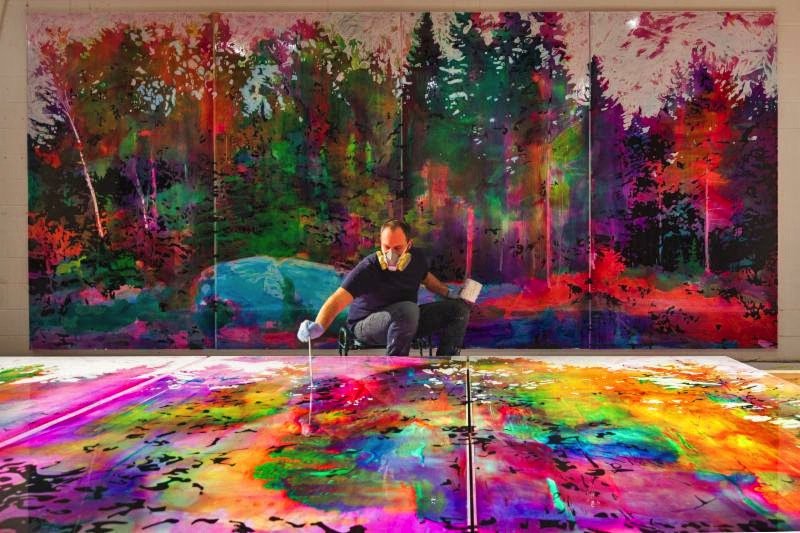 Jay Dart was awed by the paintings of Steve Driscoll (pictured).

JAY DART Artist. Greetings From Yawnder!, his show of drawings about his creative process, hangs at Robert McLaughlin Gallery in Oshawa until January 15.

I’ve admired Steve Driscoll‘s paintings for many years, but his exhibition Just A Sliver Of The Room (Angell Gallery, April 29 to May 28) was something else. As I wandered across the wooden boardwalk over the 2,000-gallon pond that he installed in the space, I was transported to the wilderness where the inspiration for his large-scale urethane and pigment landscape paintings originated. Recovered Shore, the show’s eight-panel, 40-foot-long centrepiece, with its reflection off the water, inspired in me such a sense of wonder and gave me the spark for my own exhibition. 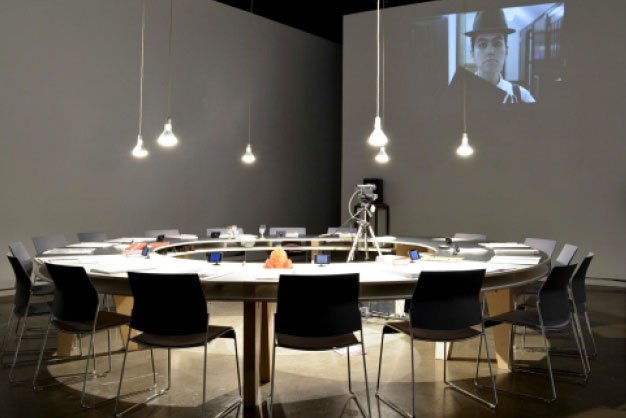 Intrepid artist Alison S.M. Kobayashi‘s deep research for Say Something Bunny! (at Gallery TPW, February 13 to March 26) brought to life the history of a suburban New York family whose 1950s conversations she transcribed from an obsolete wire recorder found in a flea market. I was lucky enough to catch one of her entrancing, shape-shifting performances, but the show, which put viewers around a circular table for a “table read” of the recording, was equally moving as an installation with videos. She’s proved you can find an interesting story behind anything if you’re willing to dig for it.

At Jumblies Theatre, Ange Loft led several collaborating artists in an oral history and community arts installation called Talking Toronto Treaties (partnering with First Story Toronto, at Evergreen Brick Works and Fort York June 8-19, and others). Artists animated audio interviews on the stories and legacies of treaties made on the area we now call Toronto. Another showing of the soundscape installation will take place June 16 to 18 at the Indigenous Arts Festival to mark the 150th anniversary of Confederation.