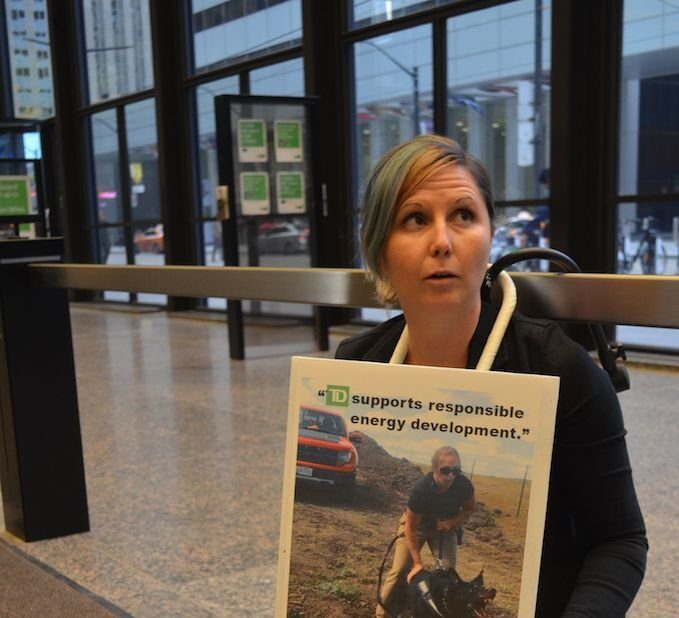 As pipeline protesters in Standing Rock, North Dakota, prepare to hold their ground against a December 5 eviction order – and a potentially violent showdown with heavily armed police – pressure is mounting here on TD Bank to drop its sizable financial stake in the contentious project.

On Thursday (December 1), Rhythms of Resistance will demonstrate outside the bank’s head office on King, asking Canadians to close their accounts at TD as well as at RBC and Scotiabank, which are also bankrolling the Dakota Access Pipeline (DAPL).

Earlier this week, a group including past recipients of TD’s annual university scholarships for community leadership issued a public letter calling on the bank to withdraw its $360 million interest in DAPL, which is being routed through Sioux territory and under Lake Oahe, a reservoir on the Missouri River.

In a statement issued in response, TD says it “supports responsible energy development” and is encouraging project partners to ensure the “environmental sustainability” of the site and engage in “constructive dialogue” with the Standing Rock Sioux Tribe.

But TD scholar and McGill computer sciences student Selin Jessa wants to see the bank follow in the footsteps of Norway’s largest bank, DNB, which recently sold its share in DAPL after a wave of client backlash.

Says Jessa, “I know many of us feel uncomfortable and disappointed having our money in an institution that’s supporting projects like this.”

Meanwhile, Manitoba Grand Chief Terry Nelson is warning of a strong backlash here at home if Enbridge doesn’t reconsider its own $1.5 billion offer for a share in the Bakken Pipeline System, which includes DAPL. Nelson tells NOW that frustration among young people over DAPL will be hard to contain if there are efforts to violently evict protesters from Standing Rock.

“Enbridge just puts a target on themselves,” says Nelson, hinting at possible blockades. “Canada should take a position on the side of peace and recognize it’s the Dakota people’s homeland.”

Enbridge, which is not yet an owner of Bakken or DAPL, says it’s “hopeful for a peaceful resolution that respects the legal rights of everyone involved.”