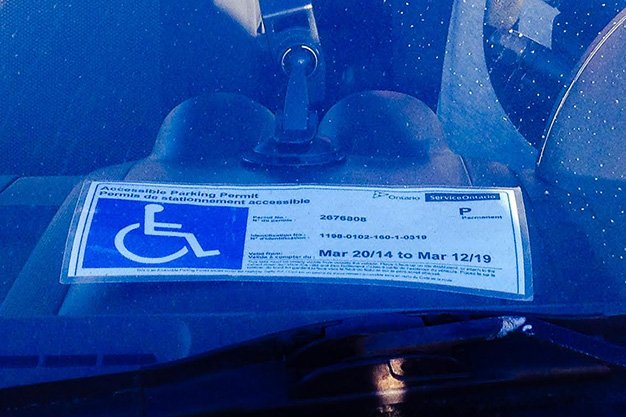 Accessible parking permit abuse is a big problem in Toronto.

We’re the only municipality in Ontario that offers free street parking for accessible permit holders with very few exceptions (no standing zones and fire hydrants). Having this type of permit is as good as gold in a city where parking is expensive and hard to come by. Everybody wants one – whether they have a disability or not.

In 2015, the city’s Parking Enforcement Unit investigated and retained more than 800 accessible parking permits (APP) and have charged over 700 people with abuse-related offences. They saw roughly the same numbers the previous year. The abuse is so bad that Toronto has a dedicated parking enforcement unit whose job it is to sit for hours trying to catch suspects in the act.

“I’m sure the misuse is a lot more rampant, but I can only cover so much with what I have,” says Scott Wylie, the Toronto police parking enforcement disabled liaison unit supervisor.

According to the Accessibility for Ontarians with Disabilities Act, (AODA) the city is required to make special accommodations for people with disabilities and the Ontario Human Rights Code takes it even further. It says the city must “recognize the privacy, confidentiality, comfort, autonomy and self-esteem of people with disabilities,” which makes calling people out on their lack of disability when they’re suspected of abusing an APP very controversial and potentially discriminating.

“It’s very difficult to police,” says Andreas Kyprianou, a spokesperson for Service Ontario, which issues the permits across the province. “If someone has a breathing issue, that technically falls under eligibility for an accessible parking permit, but how do you tell? It’s really hard.”

That’s the reason he says the province is currently working with the city of Toronto and its parking enforcement community to better combat abuse and come up with a standardized approach for reporting APP seizures. Some of the changes you’ll see in 2016 include reducing the validity period for interim permits from six months to three – so temporarily disabled holders would need to renew more often – making the permit more tamper resistant and making it easier for parking enforcement officers to look up the permit’s validity.

But Service Ontario also seems to be working against itself. When I recently applied to change the address on my permit (I have cerebral palsy), I was not asked to provide any verification of my identity or proof of my new address before the change went through.

“What I’d like to see is the permit holder’s photograph on the front of the permit. That would eliminate so much of the abuse because I could just look at the permit holder and say to the driver, ‘This isn’t you,’” said a GTA parking enforcement officer who asked to remain anonymous to protect his job.

Sometimes, legitimate APP holders like myself can get caught in the crossfire.

It’s happened to me twice. I don’t drive, but my girlfriend’s car was parked outside my condo and it was ticketed because it didn’t have a residential permit (This permit allows Toronto residents to park on the streets near their home over a certain period of time when a driveway isn’t present). What it did have – prominently displayed on the centre of the dashboard both times – was my passenger designated APP.

“It’s sad to say that [parking enforcement] officers get low on tags, so they may put a ticket out there that is bogus, but I think what happened to you was a mistake,” said the enforcement officer. “The officer probably just didn’t see it for whatever reason.”

Possible reasons included the officer not wanting to walk to the other side of the car because of oncoming traffic, the pass being obstructed by a reflection on the windshield or a training issue.

“I know Toronto parking enforcement has pretty thorough training, but the rule about accessible parking permits – maybe the officer doesn’t know that or doesn’t encounter it very often, so it’s not at the front of his mind. Perhaps he’s subbing for someone in a patrol area that he’s not used to,” the  enforcement officer suggested.

With the confusion possibly due to different rules in other municipalities, where an accessible parking permit is only valid at a designated accessible parking spot, why does the city of Toronto offer people with disabilities free parking on the street?

“Certain people with disabilities have problems reaching, manipulating and inserting coins or credit cards in parking meters and machines, so requiring APP holders to pay on-street would create a hardship for those people. Also, many people with disabilities have limited incomes or are otherwise economically disadvantaged and requiring them to pay to park on-street would further disadvantage them,” says Steve Johnston, spokesperson for Transportation Services at Toronto City Hall.

Currently, a person’s disability can be validated by six medical professionals, including nurses and occupational therapists. The enforcement officer suggested reducing that privilege to only medical doctors or surgeons.

“Those are all good ideas to think about,” says Kyprianou. “I don’t know how long it will take, but improvements will be made in the new year.”