NOW MagazineNewsToronto’s laneways get transformed in five neighbourhoods this summer

Toronto’s laneways get transformed in five neighbourhoods this summer

From haircuts in Bloordale to street art in Reggae Lane, you're going to look at our back alleys differently thanks to this year's expanded Laneway Crawl 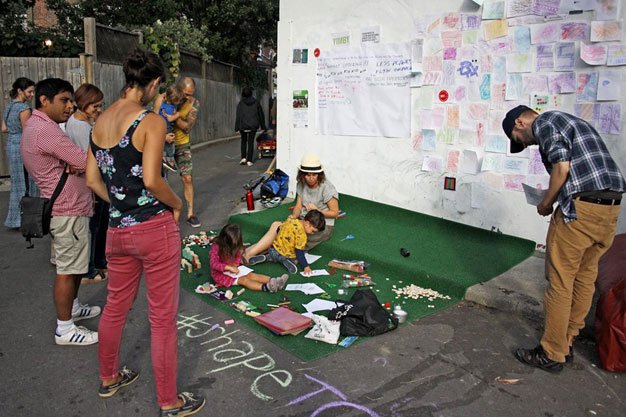 A Toronto group is going to liven up Toronto’s laneways this summer with a series of crawls through the city’s garage-lined alleyways.

The Laneway Project is a non-profit dedicated to transforming the way Torontonians think about and use alleyways with the Laneway Crawl Series. The series will highlight five different communities and be spread out across summer. They’ll celebrate neighbourhood businesses and feature live performances – not unlike the festival-style events featured in NOW’s Hot Summer Guide.

“There will be performances, but also things like haircuts and art workshops for kids,” Michelle Senayah, cofounder of the Laneway Project, explains. “The idea is that all the activities are interactive and engaging and summer friendly.”

Last year, the Laneway Project organized a single laneway crawl in Bloordale. “We worked with local businesses and different cultural groups in the neighbourhood, so it had a distinct Bloordale feel,” Senyah explains.

When the group was invited back to host another laneway crawl in Bloordale this year, they decided to expand it to other Toronto neighbourhoods. After kicking off in Bloordale on June 11 (where the laneway event will run in conjunction with the Bloordale CIA’s community garage sale), the series will move to the Junction for the Summer Solstice Laneway Crawl on June 18.

Some of the crawls are tied to specific community events, such as Oakwood-Eglinton’s Reggae Lane Crawl that’ll include a mural unveiling by artist Adrian Hayles on July 16. Following the August 20 crawl on Danforth East, the final event of the series will take place in Christie Pits on September 25.

“What makes the laneway crawl so interesting is if you do it as a whole series rather than attend an individual event, you’ll get to see a very different mix of things happening in the laneways because we work hand-in-hand with local communities in each area,” Senayah says.

The laneway crawls vary in length. Some of them, such as the one in Reggae Lane, take place on a single lane. Others, like the Bloordale crawl, which run along laneways north and south of Bloor West between Margueretta and Dufferin, are spread across several lanes.

The Laneway Crawl Series is just one of several projects the group has going on. They’re involved in street-art and greenery planning for some of Toronto’s laneways as well as organizing volunteer-driven clean-ups. They also provide feedback to city hall staff on urban development.

“Our broader work is to transform Toronto’s laneways, improve the laneways and our relationship with them,” Senayah says. “That means, how we think about laneways, but also how we plan, design, use and regulate them.”