Toronto’s new Japanese sweet treats (and entertainment on the side)

While Uncle Tetsu's empire continues to expand by opening downtown's first maid-themed café, an all-matcha upstart has arrived just a few paces away to vie for Toronto's attention. Here's where to get a Tokyo-style sugar fix this spring. 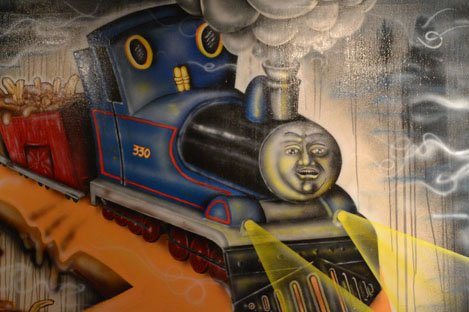 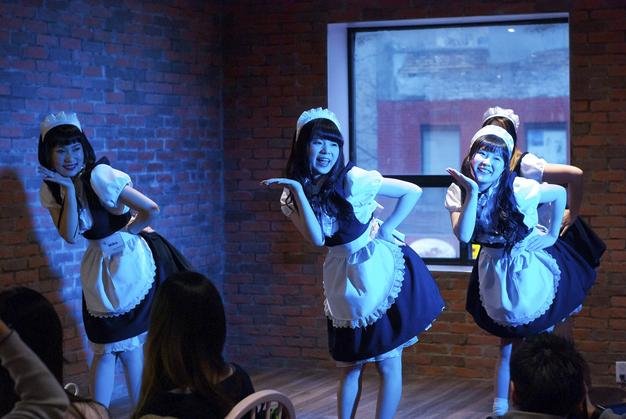 It may have been founded in Japan and boast more than 100 stores from Hangzhou to Honolulu, but Toronto is truly the land of Uncle Tetsu.

The franchise’s first Canadian shop, opened here in 2014, generated two years of lineups for Japanese cheesecake, so founder Tetsushi Mizokami chose Toronto as the testing ground for not one, but two new concepts: Uncle Tetsu’s Matcha Cafe (which has successfully spawned an outpost back in Tokyo) and the newest arrival, Uncle Tetsu’s Japanese Angel Cafe.

In contrast to its two miniscule sister shops, the third Tetsu’s features a spacious seating area with tableside service, which has already made for comparatively shorter lineups since opening at the beginning of April. The spot is named for the angel hat, another cheesecake in the Tetsu’s repertoire that gets an expanded offering here (in matcha, chocolate, strawberry and plain flavours), but also for the so-called angels staffing the place: female servers in frilly French maid costumes.

It’s meant to offer a significantly scaled-back version of the “maid cafe” experience popular in Japan, mercifully without creepy “Welcome, master!” honorifics or role-play servitude. (Uncle Tetsu’s Canada has tactfully dubbed it “maid-style.”) The most out-of-the-ordinary things you’ll see are occasional dance routines to sprightly J-pop tunes performed by the angels several times a week, delivered with such enthusiasm that it’s tough not to get sucked in by the charm offensive. Any way you slice it, you can still see far, far worse wait staff uniforms down the street at JOEY.

The real draw, of course, is the significantly expanded lineup of baked goods, fuelled by two on-site kitchens, including one devoted entirely to producing the angel hat cakes. Much of the Tetsu’s product line is available for dine-in, including three types of cheesecake: the eggy, rich Uncle Tetsu’s classic, ultra-whipped and airy angel hats and the smooth, silky, dense lunar cheesecake, named for its bake-free nature (no heat – get it?) and the tiny little air pockets on top that resemble craters. The latter, built on a graham cracker crust, is the closest Tetsu’s gets to a classic New York-style cake. It’s also my personal favourite, and the super-citrusy yuzu flavour is a standout.

There are also little pudding parfaits and a full complement of espresso drinks, tea and even matcha lattes poured with little teddy bear faces. It would be impossible to walk out of that pink-painted hallway without a sugar high. 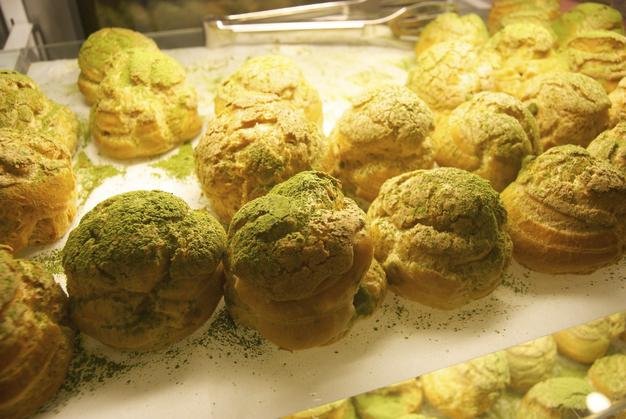 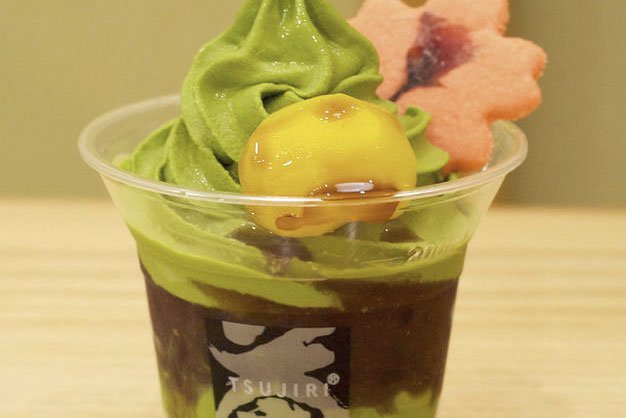 Lineups spring eternal at the original Uncle Tetsu’s, but the queue at the Matcha Cafe has been all but extinguished by the arrival of Tsujiri.

That name may be new to us, but in Asia it’s synonymous with all things green tea.

Founded 155 years ago in Kyoto, the company operates a dozen locations in Japan, China, Singapore and Taiwan. When Desmond Song visited Kyoto a couple of years ago, he was struck by the lines out front of the Tsujiri flagship and fell in love with their wares. He teamed up with business partner Tylor Shek to create franchises in Canada. BC locations are next on deck.

That matcha, along with every other ingredient on their menu – aside from dairy and occasional drizzles of maple syrup – is imported from Japan. That’s caused a few items to be temporarily pulled from the menu, like their fastidiously presented soft serve sundaes topped with cherry-blossom shortbreads and sunny yellow candied chestnuts, as they attempt to bring in ingredients not available anywhere else in the city.

There are other places to down some of these treats downtown, but Tsujiri sets itself apart through the sheer breadth of its 50-item menu: straight-up “o-matcha” and lattes infused with maple and black sesame houjicha, a roasted version of matcha with a milder, maltier flavour a lengthy roster of boba and blended drinks vanilla and matcha soft serve, available solo or as floats and baked treats like macarons and choux filled with green tea creme.

All of their menu items are handily ranked on an intensity scale, in case you’re among those who find the powdered green tea drink too bitter.

Importing adds cost, of course, and the small staff of baristas, trained by Tsujiri staff flown in from Japan, crank out each drink and frosty treat to order, which adds time. (On a recent visit, a sweet matcha slush, a big cup of rich swirled soft serve, and two red bean-filled macarons cost me $18 and 20 minutes of waiting.) But with this many refreshing treats on offer and prime soft-serve weather on the way, don’t expect the lines to get shorter anytime soon.

Don’t miss: Where to get Japanese cheesecake