Just noodles and cheese sauce? Look again at the weeknight meal your mom plunked onto the table, or the boxes of dirt-cheap carbs you subsisted on in college.

Not only is macaroni and cheese a comfort-food classic – the perfect antidote for a grumbling belly or a merciless January wind – it’s the blank canvas for a plethora of culinary possibilities. Whether it’s peppered with meat or veggies, doused in ketchup and hot sauce, dressed up with high-falutin’ add-ons like lobster and truffles or morphed into a gooier sibling of some Thai, Italian or Chinese favourite, good pasta in a thick béchamel sauce plays shockingly well with others. Of course, there’s no shame in just eating it straight-up, revelling in the simple pleasures of toothsome macaroni and liberal quantities of cheese – scattered, crusted, broiled, melted, and ready to take its place in the spotlight.

Our cover-star mac was a big hit at last summer’s inaugural Mac & Cheese Fest – even among the folks who didn’t get to eat anything. Chef Kevin Sinclair reports that his truffle-laced take won second prize (the crown went home, impressively, with NONA Vegan Foods), and after the fest ended the 24-hour diner was swarmed with festival-goers jonesing for cheese. The secret formula, Sinclair says, is an “old-school” Mornay (as opposed to the usual béchamel) infused with provolone, mozzarella and a hint of cheddar and mixed with “scoobi-doo” noodles (cavatappi if you’re Italian). Topping it off is a drizzle of truffle oil and an Asiago-panko crust. See listing. 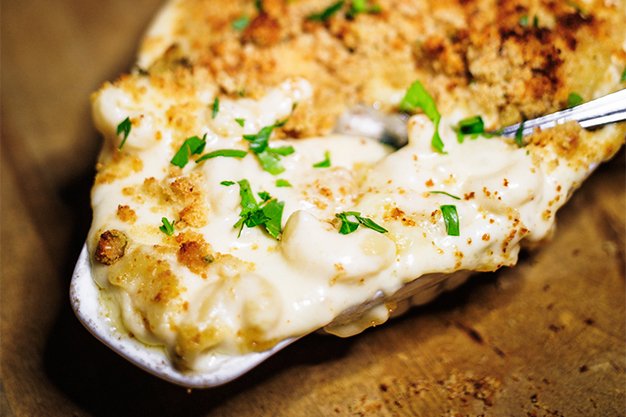 How many clandestine under-the-desk afternoon naps have been induced by this Financial District carb bomb? Chef Graham Pratt makes the pink-slip risk worth taking at the homiest restaurant on Bay. Cheddar, chèvre, mozzarella and Parmesan form the backbone of the béchamel sauce, but a dose of paprika and a chive-garlic-tarragon bread crumb topping provide an idiosyncratic twist. A lasagna-dishful is $17 add a very, very healthy scattering of smoked ham cubes for $2. See listing. 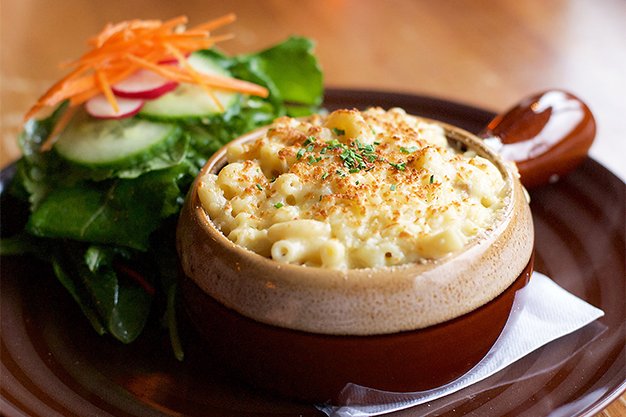 For years, Danforth residents have been drowning their sorrows in cheese at this neighbourhood local. Its classic version ($18) includes soft elbow mac smothered in a smooth blend of Gruyère, Parm, Asiago and aged cheddar, plus a secret addition to the roux that chef Alana Ferguson says “basically kicks up our sauce. It adds hints to everything else.” Also standard is double-smoked bacon and, adorably, a side salad, because these people care about you eating your greens. The end result is nothing fancy, but it tastes like a warm hug. See listing. 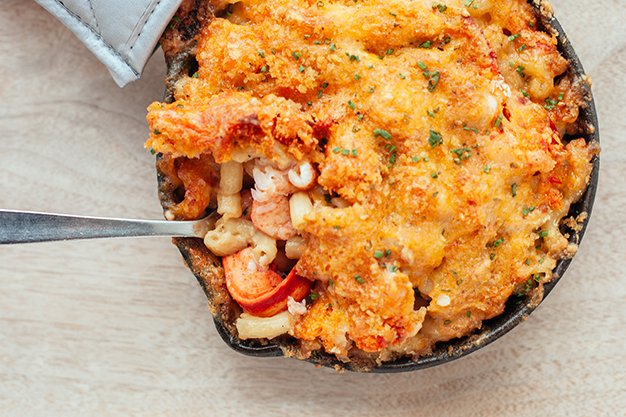 The trend of dressing up low-culture eats with lobster has a firm clawhold on upscale menus, but Matt Dean Pettit’s crustacean-crunching chain deserves props for keeping the little red suckers accessible for the bar food crowd. At both Rock Lobster locations, $18 gets you a skillet full of noodles swimming in an aged-cheddar béchamel and tossed with Nova Scotian lobster meat. See listing. 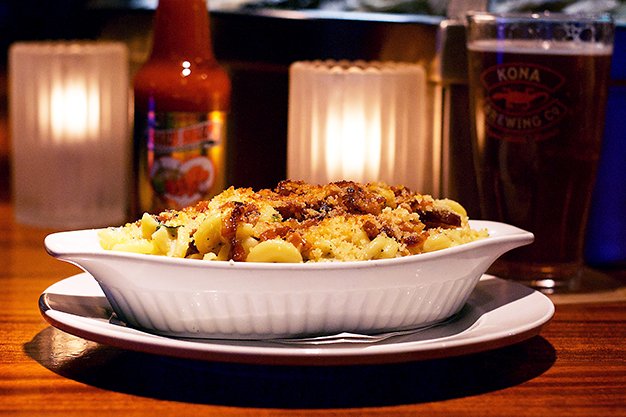 Riverdale’s Prohibition seems like an everything-to-everyone sort of joint – kids’ specials on the one hand, “hooch hour” drinks and messy weekend dance parties on the other. Surprise: this is the most indulgent, elaborate, flavourful take on mac and cheese east of the Don ($17.95). It’s built on novel Vesuvio pasta, each little curlicue resembling a bursting volcano – all the better to latch onto a mix of aged Swiss Gruyère, Asiago and just enough Bleu Ermite to add some depth.

The real secret weapon is ultra-concentrated truffle paste – a couple of spoonfuls is all it takes to flavour six litres of sauce and gloriously perfume the whole restaurant. Crumbs made from jalapeño biscuits, baked in-house, add a buttery, cheddary dimension. See listing. 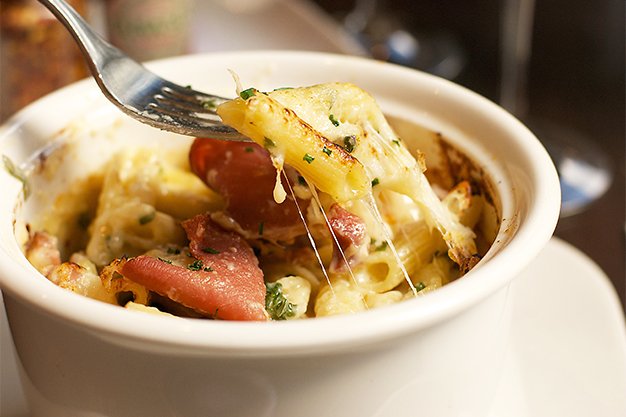 Those raised on KD might not be able to imagine a world in which $32 is an appropriate sum to spend on a bowl of mac and cheese. But that world is very real, and you can get an enticing glimpse at Carens, which recently shut down its Yorkville location to focus on new digs in Rosedale. Its mac (or, technically, penne) is an absolute knockout, with a crusted top giving way to a sharp, umami-heavy five-cheese blend.

Purists (or those watching their wallets) can get this deliciousness whisked to their table in a covered dish for $18 – but dig up an extra $6 for liberal helpings of chorizo or prosciutto, or $14 more for lobster. You won’t regret it. See listing. 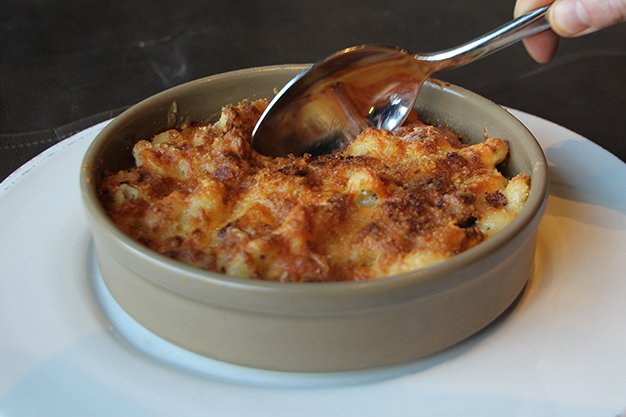 It’s the boîte of choice for those looking to consume a barnyard’s worth of meat, wash it down with a $15 cocktail and dab their lips with a white cloth napkin. So, naturally, the fanciest BBQ joint in town has a killer mac and cheese. Chef Hidde Zomer does his with Gruyère, aged cheddar, mozzarella and a liberal helping of the bar’s pit-fired pork underneath a caramelized crust. See listing.

Ever striking an artful balance between cozy and trashy, this King East bar offers an endlessly customizable mac that might overtake Betty’s nachos as the best

build-your-own drunk food in the house. A basic skillet of mac sets you back $11.95, but for a few bucks more you can get most of the menu on top: bacon, chicken, steak, ham, jalapeño peppers, chili, peppers, onions – even peameal, in a gloriously Toronto twist. See listing.

Thank goodness for Zane Caplansky and the thoroughly non-kosher menu at his College Street deli. Otherwise, the world would be missing out on the joys of scarfing down hunks of Montreal-style smoked meat enrobed in a three-cheese sauce. Elbow noodles and a bread-crumb/Parm topping round out the dish. It’s $13, but you can get a brisket-free mac for $10 if you hate meat/fun. See listing. 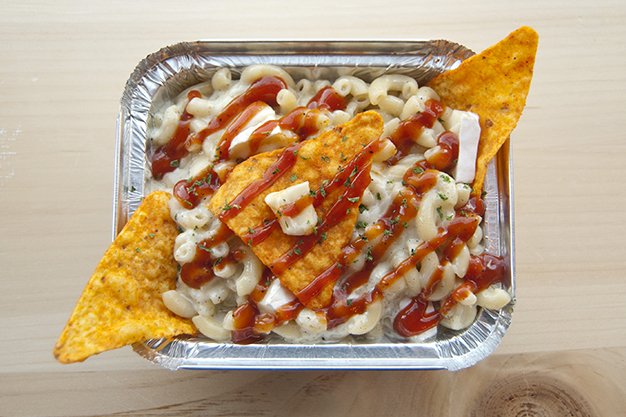 This Dundas West takeout spot takes stoner food to new heights (or lows) with shamelessly diabetes-inducing combos like Eggo sandwiches and grilled cheese donuts. Fear of the Whack Mac, which incorporates white chocolate along with Brie and elbow-length strings of mozzarella, is understandable. But let it surprise you: with a sprinkle of earthy sage and a drizzle of ketchup, it’s one of the most sophisticated things on the menu, even if it is garnished with Doritos. See listing.

There are plenty of crowd-pleasers on the menu at this all-mac-all-the-time offshoot of Poutini’s. Plates of cava-tappi done up carbonara-style or piled with blue cheese and buffalo chicken are among the top sellers, but manager Katie Laliberté says the two sleeper hits on the menu are her self-invented Camp Mac, with hot dogs and a liberal lashing of French’s mustard, and the Curry In A Hurry, a pasta-fied version of her mother-in-law’s curry, tuna and green pea casserole (both $7 small/$12 large).

Not everyone’s brave enough to try the latter, but Laliberté reports that it has the most loyal following, and gets the most rave reviews, of anything on the menu. See listing.

Cheese and carbs are not enough for Fidel Gastro chef Matt Basile, who routinely experiments with boundary-pushing mac and cheeses in his Queen West kitchen. Recently replacing a root-beer-braised beef cheek mac is one smothered in Thai green curry, with coconut milk standing in for the cream in a white-cheddar-laced -béchamel.

“We needed a cheese that doesn’t change the colour but still gives it that ooey-gooeyness you need,” Basile explains. “The cheese is not so much a flavour it’s a function – of gooeyness.”

He reports the curry mac has been well received – as are the multicultural build-your-own mac bars (featuring Polish, Thai, Mexican and Greek-themed toppings) in Gastro’s catering division. See listing. 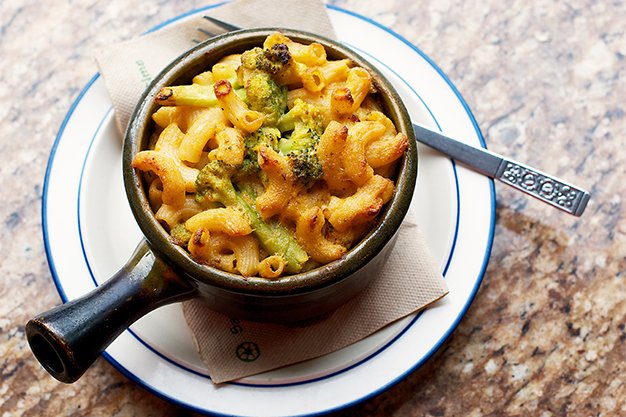 Broccoli in mac and cheese? “I think it’s the most important part of the dish,” says Matt Kent, the chef at this vegan, mostly gluten-free café. “Then again, I really like broccoli.”

Here the roux is made with chickpea flour and Earth Balance margarine, while the flavour comes from a blend of tamari, miso, nutritional yeast and spices. “It’s a very traditional cheese sauce – except there’s no cheese.”

The flavour is mild, with a hint of garlic, and the pasta has such a convincing spring you’d never know it’s GF. An “app-sized” portion, more than enough for a light lunch, is $8 add homemade fake bacon bits for $2. See listing. 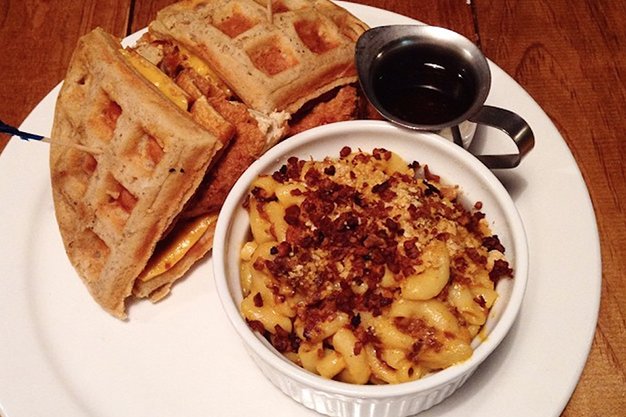 Because going vegan doesn’t mean giving up bad decisions, this super-chill café in Bloordale gets liberal with the deep-frying, faux cheese and maple-syrup drizzles when it comes to the animal-free comfort food. Meatless Reubens and tofu “chicken” and waffles are perennial hits among the tempeh and TVP-inclined, but Hogtown’s take on mac and cheese ($10) features a smooth, spicy sauce that sent even my Daiya-averse self home happy. See listing.

Its sweet treats have earned this vegan and -gluten-free bakery chain the most press, but Bunner’s also makes a mean mac. Available for take-away all week long at the Kensington shop and on weekends in the Junction, the mac and not-cheese ($7.50 small, $18 family size) marries quinoa pasta with butternut squash, dairy-free cheese, nutritional yeast (for extra umami) and a few secret spices.

”It’s one of our most popular savoury items,” says owner Ashley Wittig. “Surprisingly cheesy, and 100 per cent comforting, like any true mac.” See listing.

THINGS WITH MAC ON THEM 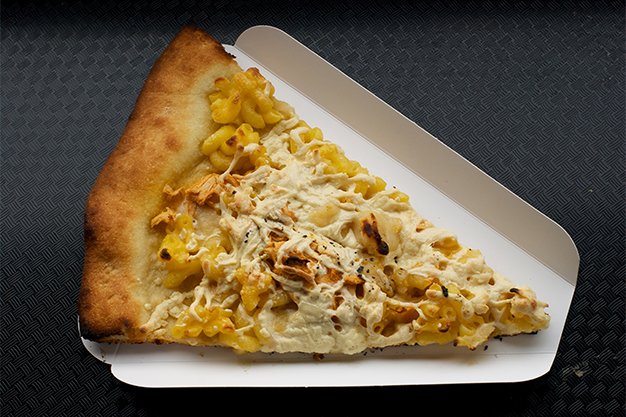 At Toronto’s premier metal-themed vegan bakery, you can pick up a slice ($4.25) topped with organic mac in a house-made Daiya sauce, faux Buffalo not-chicken and shreds of vegan jalapeño havarti. Next on deck: a vegan macaroni grilled cheese! See listing. 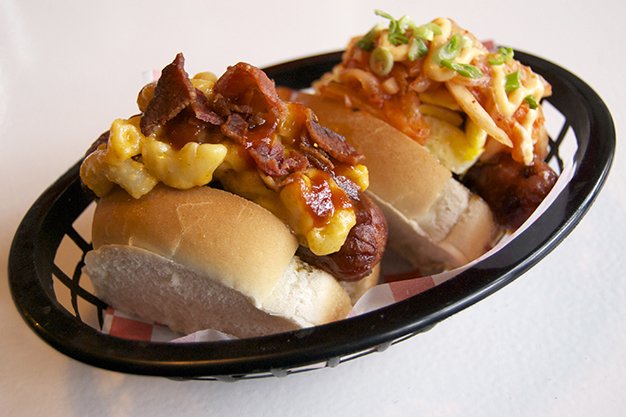 Hot dogs at Let’s Be Frank

Retro eats with a mad-science twist are what Uncle Betty’s Diner does best – so, naturally, they’d be the ones to top a grilled cheese sandwich with a layer of mac and either a slab of meatloaf or a scoop of pulled pork. See listing.