It was Torontos Stonewall, a brutal police raid that brought the many divided elements of the gay community together on. 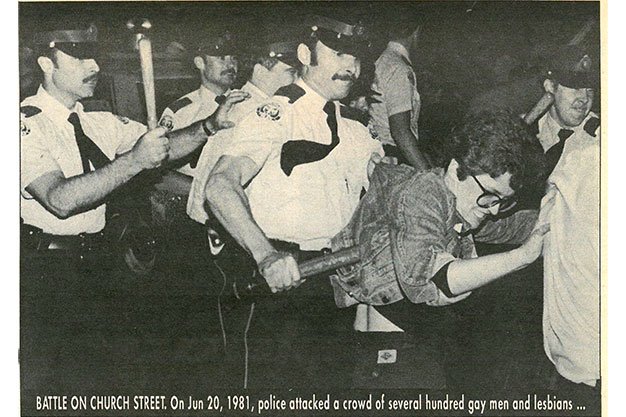 Image from Body Politic of June 20

It was Torontos Stonewall, a brutal police raid that brought the many divided elements of the gay community together on the streets to protest in large numbers for the first time.

Except for the roundup of suspected dissidents during the imposition of the War Measures Act in Quebec in 1970, the raids were the largest police action to that point in Canada.

Operation Soap, the cops code name for the raids, inspired novelist Margaret Atwood to wonder, tongue-in-cheek, What do the police have against cleanliness? Indeed, the majority of city councillors wanted to know the same thing and ordered an independent review by Arnold Bruner on relations between the police and the homosexual community.

Outrage as well as fear of outings, firings and suicides of gay men caught up in the raids led to the largest gay rights demonstrations the country had ever seen.

On the eve of the 35th anniversary of the raids, questions still remain: Why did the police never apologize? Who gave the order?

John Burt was one of those arrested on the night that long-time gay leader George Hislop declared will go down in infamy. Burt says he had no idea at the time what the cops were talking about as they pushed him naked into the locker room along with about 80 others.

Burts family were Holocaust survivors, and he says he had an immediate emotional connection to that and understood their terror for the first time. He says the cops acted like thugs.

On the night of the raids, some members of the then small activist gay community among them Trinity College English professor Doug Chambers of the U of T Gay Academic Union, Dennis Findlay of the Right to Privacy Committee (RTPC) and people from the Body Politic (BP) collective and the Metropolitan Community Church, run by Reverend Brent Hawkes hurriedly called each other at midnight to debate what to do.

Some, like BP collective member Chris Bearchell, suggested an emergency rally that night.

But how can we organize a major demo in 12 hours? wondered collective member Tim McCaskell. Bearchell convinced them that a successful demo could be organized, and they all hit the phones.

While they had no real concrete plan, according to McCaskell, they hoped to bring out enough people to at least close the intersection at Yonge and Wellesley.

But many more than expected responded to flyers left at gay bars and other Church Street meeting places. More than 3,000 people showed up at midnight February 6. I was among them and saw people there I had never seen at demonstrations before. We listened to all the speeches, including one by the widow of a black man shot and killed by the police.

We marched down Yonge to 52 Division, which was guarded by what seemed like the entire police force. Why did so many turn out when they had mostly ignored demonstrations on everything from the Body Politic raids to anti-Anita Bryant rallies?

Because, explains McCaskell, the bathhouse raids violated the social contract of the closet, of Dont ask, dont tell.

These raids violated the unwritten order that existed between the gay community and the police.

Bearchell coined the phrase that became the rallying cry for the march that evening and for the gay and allied anti-cop movement that sprang up later in Toronto No More Shit, which I recall became a defiant Fuck U 52 as marchers approached 52 Division.

McCaskell was badly injured (he was hit by clubs and required many stitches), as was Body Politic collective member Ken Popert, who was hit by a cop car. Both ended up in the early hours of the morning in the emergency ward at Wellesley Hospital. The demonstration had become a watershed moment, much like the 1969 Stonewall riots after a New York City gay bar was raided by police.

Why did the police move so suddenly and harshly against the ordinary gay community? Many activist leaders think police felt they had the green light after the defeats of Hislop for alderman and pro-gay mayor John Sewell in that falls municipal election. (Sewell spoke out at a rally against police raids against the Body Politic in the late 70s).

Out Of The Closets: A Study Of Relations Between The Homosexual Community And The Police, Bruners report to city council, which might not have come about without a hunger strike by Brent Hawkes, could not conclude who gave the order. Though it is almost certain that the police chief at the time, Jack Ackroyd, gave the go-ahead, it was widely believed that attorney general Roy McMurtry approved the raids. However, he said he only learned of them after the fact. McMurtry later served as chief justice of Ontario and wrote the Ontarios Court of Appeal 2003 decision in favour of same-sex marriage.

After the raids, the gay community rebooted old organizations like RTPC, which had been born out of arrests for indecency a few years earlier. New, powerful groups like Court Watch, under the inventive leadership of Dennis Findlay and George Smith, fought charges laid after the raids. Police often could not identify the individuals charged, and many cases were thus thrown out right away.

McCaskell, who would later go on to become one of the founders of Aids Action Now, says the Aids Committee of Toronto (ACT) adapted the RTPC constitution [on organizing] even though they [had] totally different subjects and objectives.

There are now many official and unofficial liaisons between the police and the gay community, as recommended in the Bruner report. But its proposals were not instituted until 1991, when Kyle Rae and others organized the Church Wellesley Neighbourhood Police Liaison Committee, of which I was one of the first elected members. There we had a direct line to the superintendent, inspector and sergeants at 52 Division.

Since the raids, the bathhouses have been essentially off limits to the police, though there have been some notable exceptions like the raids on the Bijou and on the Pussy Palace (an all-womens night) at the old Club Bath. In both cases, charges were either withdrawn or lost by the Crown. In the case of the Pussy Palace, the Ontario Human Right tribunal ordered police to pay damages.

Today there is an organization of active gay police on the Toronto force, and the police proactively recruit in the gay community. The LGBTQ community has come of age and the bathhouse raids set us on that path to recognition.

James Dubro is a crime researcher and author who has been active in gay-police community relations since the 1990s.