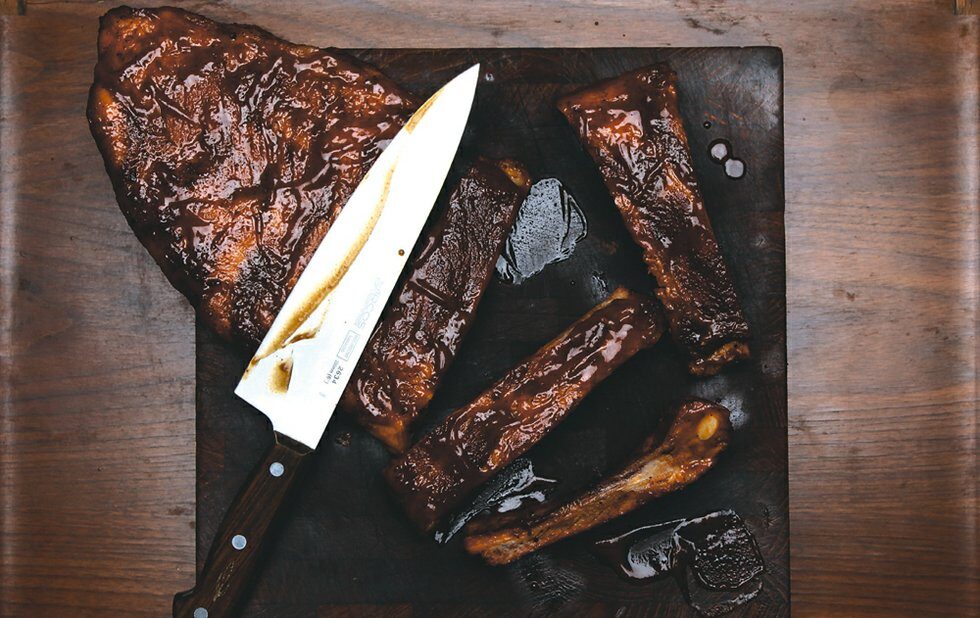 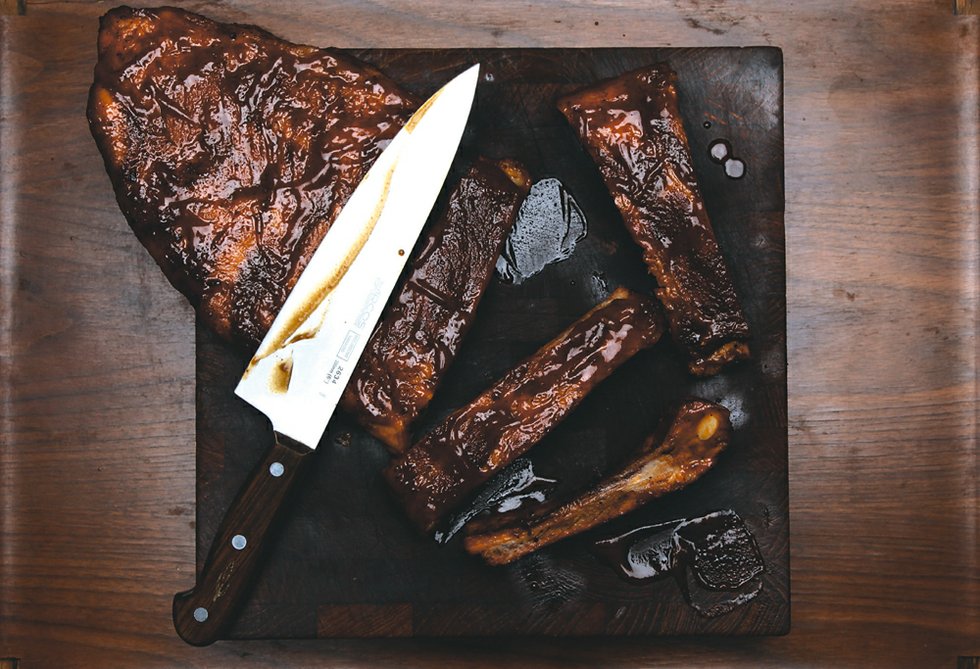 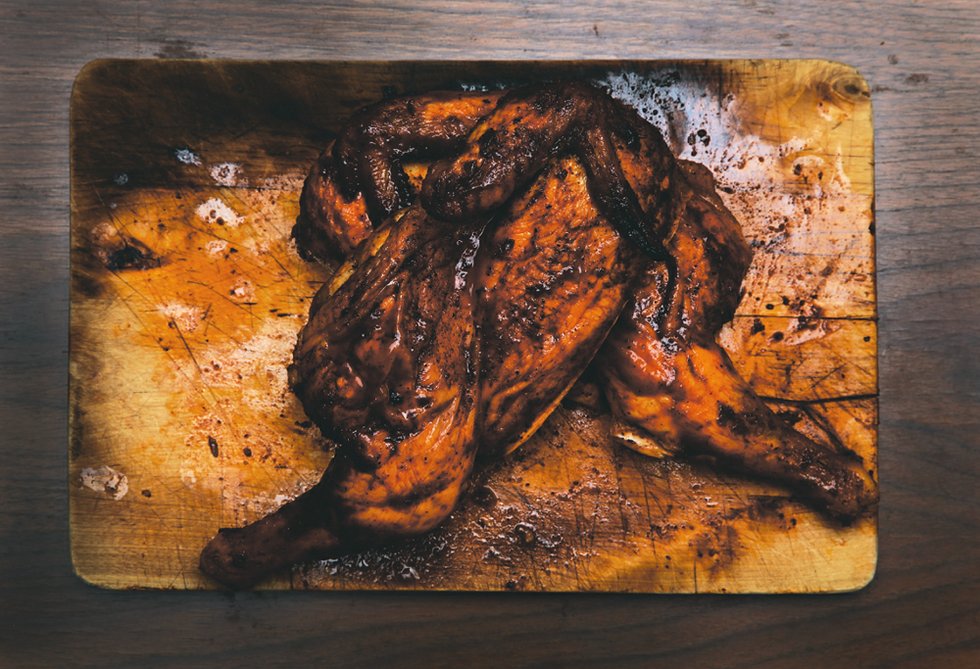 When I plan a visit every six months or so to Tom Davis’s uptown ‘cue pit, I always do so with some trepidation. Will his ribs really be as good as I remember? But once I lay eyes on them, it’s love all over again.

I’d forgotten how large the racks ($13 half/$25 whole) are – twice the size of others and three times as meaty. Cut St Louis-style, i.e. Flintstonian, they come rubbed with subtle notes of cayenne and cumin and the distinct Mediterranean presence of olive oil: two and a half pounds of hog heaven. The fantastically textured pig on his pulled pork sandwich ($8) isn’t so much shredded as hacked by a blindfolded samurai wielding a chainsaw. The spicing on the whole smoked chicken ($14) now verges on jerk and is the tastier for it. 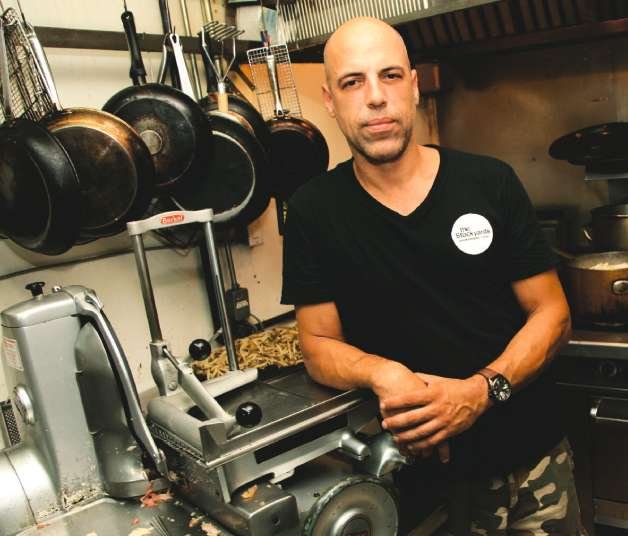 No crappy industrial coleslaw here. An exceptional salad of snappy garden-fresh green beans gets drizzled with a garlicky vinaigrette spiked with rehydrated red bird chili flakes, while the starch du jour turns out to be cubed sweet potatoes in a buttermilk dressing topped with house-smoked bacon (both $5).

Davis could be churning out his ribs on an assembly line, like most of the competition, but he chosen instead to offer it only Tuesdays, Fridays and Sundays from 5 pm – it’s that labour-intensive. If only for that, he deserves our respect.

Tuesday to Saturday 9 am to 9 pm. Brunch Saturday and Sunday 9 am to 2:45 pm, dinner Sunday 4:45 to 8 pm. Closed Monday, holidays. Unlicensed. Access: steep ramp at door, washrooms on same floor.

For those who get the vapours every time they travel east of the DVP, the hour-long trek down the 401 to Whitby may prove an out-of-body experience.

The trick is to ignore the bumper-to-bumper traffic and stay focused on what awaits at the end of the line: some of the finest southern-style barbecue in the GTA. In true ‘cue fashion, the original’s white-on-white room isn’t much to look at: a fluorescent-lit takeout counter and a scattering of plastic patio furniture. But who needs decor when the grub’s this good?

Nicely sauced racks of maple-smoked baby back pork ribs ($15.99 half/$17.99 whole) come sided with Carolina-correct coleslaw and deep-fried hush puppies (the fritters, not the shoes), whereas the deli-style brisket and pulled pork sandwiches ($5.99) stand alone, sauce-free. Want further proof of authenticity? Look no further than the autographed 8×10 of Paula Deen on the wall, y’all. But what of Buster’s plans to move into the Hogtown market?

“We still plan to take on Toronto,” says the mini-chain’s Darryl Koster, who’s just opened a third Rhino’s in downtown Oshawa. “We’re always looking for locations, but it has to be the right space.” 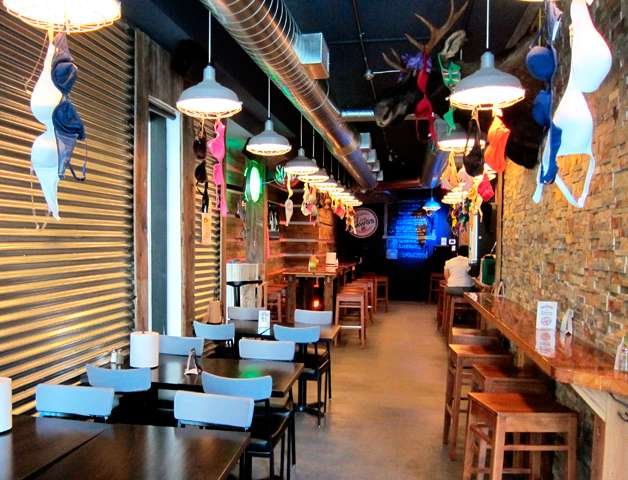 If the last two words of this N’Awlins-style roadhouse’s name don’t scare you away, the brassieres hanging from the light fixtures will: Lou is the Guu of barbecue.

From the corrugated tin and reclaimed barnboard (yawn) on the walls to the satellite radio tuned to ye olde blues station, this Dawg is very much a student pub. Lucky for the rest of us, this house-smoked carte rises far above the clichés of pub grub.

Racks of St Louis-style ribs ($12.95 half/$22.95 full) are best when amply dusted with the house dry rub (my guess: smoked paprika and powdered garlic), though if you’re the type whose ‘cue isn’t complete unless it’s smeared all over your face, you might want to have them mopped with the house’s sugary sauce.

Lou’s slow-cooked brisket doesn’t so much fall from the bone as fall apart on its own accord, so tender the beef. Both pulled pork and chicken (all $11.95 with two sides) come in a sweet, syrupy sauce that tastes like it escaped from the nearest Swiss Chalet. Not a bad thing.

Next to the ladies’ underwear, the things that bring us back to the Dawg again and again are the sides (all $2.99 small à la carte/$4.99 large) – an aggressively spiced coleslaw with the crunch of a hella red onion, baked beans thick with shredded pork, and mashed sweet potatoes laced with roasted apple and maple syrup that wouldn’t be out of place in a Thanksgiving pie.

Poor Hadley’s. It tries so hard and comes so close.

Not that there isn’t lots to love here: an unpretentious room decked out with TTC memorabilia, an efficient, attitude-free staff, and a primo brunch on Thursday and Friday as well as the weekend. Sadly, it’s downhill from there.

Racks of pork ribs ($17 half/$27 whole) seem more baked than smoked, which might explain why they’re so dry. Too much sauce of no particular distinction doesn’t help. The smoked chicken ($14 half) consists of almost a pound of borderline dry meat in a spice rub that wouldn’t be out of a place in a Christmas cake. Prices seem high when compared to Stockyards, where the same money gets you a whole bird. Granted, the Yards’ chicken and ribs don’t include two sides, like they do here, the best a chunky potato salad kicked with capers, buttery mashed potatoes and a tangy purple cabbage slaw that complements the roughly pulled pork sandwich ($10 with side) perfectly.

“50 bucks for dinner for three is a good deal,” says our friendly server as he packs our take-away.

Not this it ain’t.

There are those who swear that David Neinstein and Jonathan Persofsky’s family-friendly spot makes the best barbecue this far north of the Mason-Dixon line. There are others who claim the same thing about the once-mighty and exorbitantly expensive Phil’s (nee DiPammo’s) on College.

The rest of us will find a larger than usual card that’s hit-or-miss. Among the former, baguette sandwiches handsomely piled with thick slices of fat-marbled brisket ($12), slow-smoked chicken wings in sticky chipotle sauce, and a very good Caesar salad (both $10) strewn with candied bacon. Yum!

Nevertheless, meaty racks of baby back pork ribs ($16 half at lunch/$19 dinner/$29 whole dinner only, all with two sides) in a “sweet ‘n’ heat sauce” are neither, and dry to boot. No amount of kimchee slaw, however on trend, can save the pulled pork sandwich ($12) from bordering on sour, and 4 bucks for half a cob of grilled corn is highway robbery no matter its supposed Cuban heritage.

Management might also want to advise some of their attitudinal staff that there’s a good reason the resto biz is commonly known as the hospitality industry.