Conservative candidates vow to build transit while keeping taxes low, but won't say how just yet 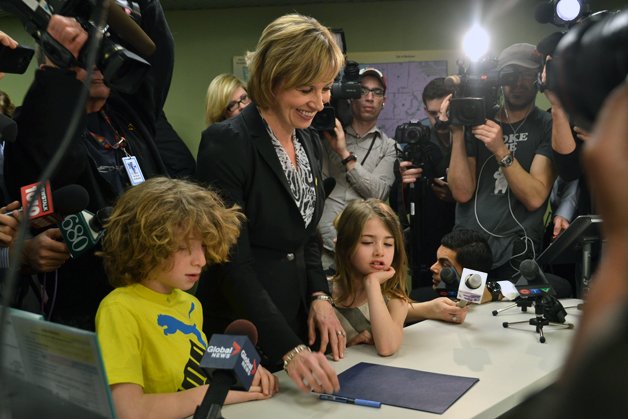 Tory’s entry into the race ended months of speculation about his political ambitions. Since last year he has been under increasing pressure from conservative forces desperate for a standard bearer who lacks the baggage of the mayor, whose drug and gang scandal has made him world famous.

After registering, Tory pledged to be a “mayor of all of the city.” He said that the divide between the suburbs and downtown “has been stoked at various times by various people, but I don’t think there’s a divide when it comes to the people.”

“I think the people know what they want. They want transit to get built. They want low taxes, especially property taxes. They want jobs and investment,” he said. “And they want a government that works, that works with each other, instead of against each other. So I don’t think there’s any divide there.”

He said that transit and keeping taxes low would be his main objectives, and building a downtown relief subway line would be “priority one” of his administration. Asked how he would pay for new transit without raising taxes, Tory responded, “That will all be revealed in due course.”

At 10 a.m., an hour and a half after Tory registered, Stintz arrived at the clerk’s office with her two young children Jackson, 7, and Hailey, 9. Her campaign got off to a shaky start when she forgot her ID. It had to be fetched by a campaign staffer so she could register.

In a scrum afterwards Stintz made a pitch that echoed Tory’s concerns about transit and low taxes.

“Over the past ten years I’ve been fighting for fiscal accountability, and while at the TTC we made some changes that were focused entirely on the customer,” said Stintz, who resigned as chair of the transit commission to run for mayor. “So those are the kinds of things I want to bring to City Hall as mayor.”

While throughout the protracted transit debate this term Stintz was a staunch advocate for so-called “revenue tools,” she said on Monday that new lines could be built without new taxes.

“I know there are ways that we can fund that portion of the downtown relief line without going to people and asking for them to pay more,” she said.

Although Tory’s registration came with less than a day’s notice and threatened to overshadow her own entry into the campaign, Stintz said she wasn’t worried he had stolen her thunder.

“It’s a great day. I’m looking forward to starting my campaign,” she said. She vowed that no matter how tight the race gets, she won’t drop out and throw her support behind another conservative candidate before the October 27 vote.

“I will be on the ballot until the end,” she said.

Councillor Doug Ford, the mayor’s campaign manager, responded to the new challengers by depicting Tory as an out-of-touch elite.

“You’re looking right now at the blue bloods and the establishment and the elites with John Tory, versus the blue collar hard working folks,” said Councillor Ford, who inherited a hugely successful label company from his father, a former Conservative MPP.

There is one more high-profile candidate who is expected to throw her hat in the ring. NDP MP Olivia Chow says she has yet to make a decision, but she would enter the race as the mayor’s most formidable left-wing challenger.