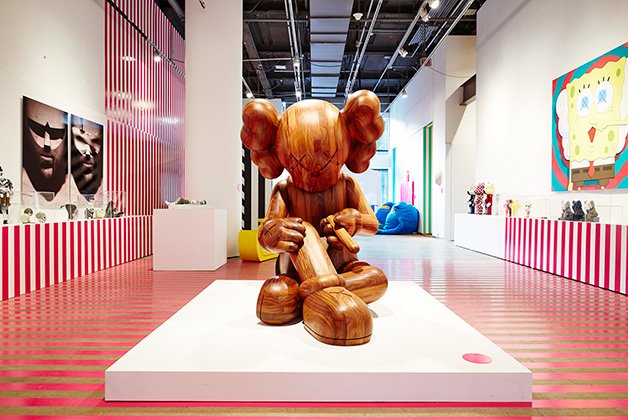 Pop culture movements collide in the This Is Not A Toy show.

“Urban vinyl” toys emerged as an eclectic trend in the 1990s, when otaku culture, sci-fi, hip-hop, fashion, skate culture, graffiti – anything cutting-edge youth were consumed with – spawned an entirely new aesthetic in art and toy design.

The Design Exchange gave unprecedented freedom to This Is Not A Toy’s curators, among them Pharrell Williams (an avid collector), who’ve turned the space into a bold wonderland of obsessive dioramas and huge sculptural pieces. Pioneers Takashi Murakami, KAWS (aka Brian Donnelly) and Bill McMullen figure prominently.

The point, it seems, is to mix and match as wildly and cleverly as possible. Bart Simpson and Ronald McDonald figurines sport grills and chains, Star Wars storm trooper helmets get painted with KISS makeup.

Oddly, it works. There’s something truly awesome about McMullen’s giant At-At snow walker from The Empire Strikes Back modified to look like a classic Adidas shell-toe kick.

KAWS started as a graffiti artist modifying NYC billboards with his signature soft-skull logo. His transition from street writer to contemporary painter and sculptor is catalogued in detail here, that logo growing from a flat interloping presence on ads into the huge afromosia wood sculpture (entitled Better Knowing) that dominates this show.

The burgeoning collectibles industry is fed by Japanese companies that often commission limited-edition figurines. Toronto’s Kristen Weckworth and Steve Cober, the tireless force behind Magic Pony, contribute major dioramas culled from their vast collection, a hefty cross-section of the most interesting work of the last 15 years.

Like hip-hop artists, urban vinyl designers salvage the raw material of contemporary junk culture to recast objects in ways that rhyme with their experience. In doing so, they’ve forged a bold new movement.