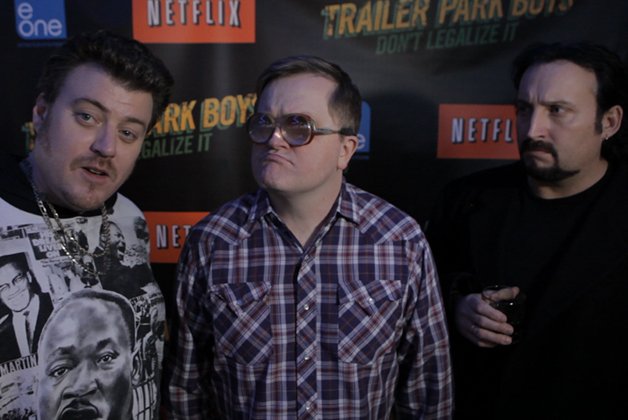 After a few years off and an unfortunate sketch comedy series, the boys are back.

The latest Trailer Park Boys flick plays very much like the series, which isn’t surprising since it reunites the cast with series writer/director Mike Clattenburg. The loose mock-doc aesthetic remains, and familiar plot lines involve selling stolen urine for drug tests and attempting to prevent the legalization of marijuana because it would cut into Ricky, Julian and Bubbles’s homegrown businesses.

Thankfully, rather than feeling like a retread, their new movie seems more like a celebration. There’s an undeniable sweetness to the gang’s relationships, a refreshingly un-Canadian brashness to their humour, which leaves an oft-overlooked darker sour aftertaste. These qualities made the series an unexpected hit that somehow continues to resonate over a decade later.

Some might balk at seeing the same big-belly, liquor-swilling jokes and slightly corrupt morality spew out onscreen yet again. There’s always been a TPB formula, but everyone involved knows how to tweak things just enough for each new chapter. Don’t Legalize It is an earned victory lap.