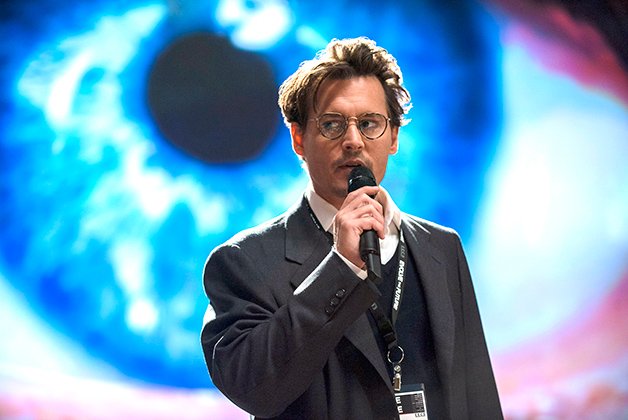 Wouldn’t it be cool to have Johnny Depp on your phone instead of Siri? That’s the key image of Transcendence, and it’s a good one.

Veteran cinematographer Wally Pfister’s directorial debut casts the erstwhile Cap’n Jack Sparrow in thoughtful-dude mode as Will Caster, a digital innovator uploaded to a supercomputer by grief-stricken wife Evelyn (Rebecca Hall) after he’s assassinated by neo-Luddite terrorists convinced that his work will result in human consciousness merging with the internet. (Oops.)

This is a concept that could be the stuff of grand sci-fi inquiry or the latest iteration of The Lawnmower Man, and it’s a little frustrating to see Transcendence settle for the middle ground of a ticking-clock thriller.

With scientists debating the ethics of interfacing consciousness with computers and Depp’s digitized face making grand statements about upgrading humanity, comparisons to The Lawnmower Man are inevitable. But this feels more like a cautionary tale from further back in the sci-fi canon, cross-pollinated by everything from Colossus: The Forbin Project to Demon Seed, with maybe a little of James Cameron and Edgar Wright’s post-punk sensibility in there, too.

One thing Transcendence doesn’t quite do, though, is capture the doomed love at the heart of the story – partly because Will and Evelyn are neutered by their physical separation, and partly because the movie is more interested in nanotech effects than in really pursuing the question of whether that’s really Will who’s taken up residence in Evelyn’s iPad.

Turns out that’s kind of an important question.