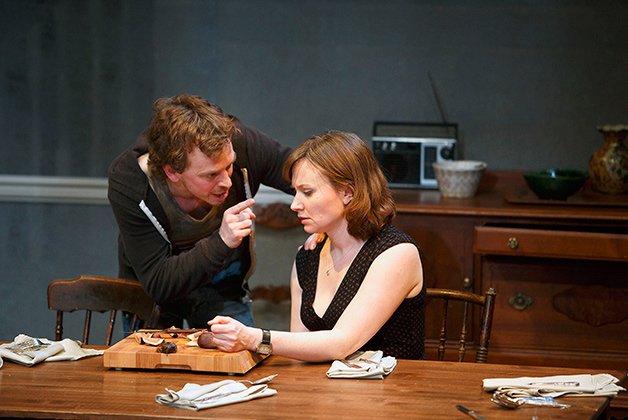 We all belong to certain members-only sects, whether it’s our family, social class or some kind of minority group. That’s one of the themes in Nina Raine’s rich drama Tribes, which gets an uneven production by Theatrefront and Canadian Stage.

Billy (Stephen Drabicki) is a deaf-from-birth man who’s just graduated from university. He’s moved back in with his loud, arty, eccentric family, headed by Christopher (Joseph Ziegler) and Beth (Nancy Palk), both writers. His struggling older siblings Daniel (Dylan Trowbridge) and Ruth (Patricia Fagan) have both moved back home, too.

When Billy falls in love with Sylvia (Holly Lewis), who was raised by deaf parents and is now herself going deaf, and is embraced by the hearing-impaired community, he begins questioning his identity and allegiance to his family, who raised him as if he had no disability.

Raine’s script is savvy in its look at the ways groups can both comfort and restrict. And the idea of communication figures prominently. Billy, who reads lips, learns sign language through Sylvia and then refuses to “talk” to his family unless they learn, too. The play’s occasional use of surtitles on a screen in Lorenzo Savoini’s set is frequently clever, as in one scene when the brothers’ unspoken thoughts are projected for us to read.

Under Daryl Cloran’s direction, though, the family dynamics don’t feel organic. Although Ziegler has some fine moments as the gruff, proud patriarch, the others’ loud, narcissistic pronouncements – about art, books, music – feel contrived.

More convincing – perhaps because she’s the outsider – is Lewis’s Sylvia, who’s trying to cope with this new family and the change in her hearing.

Richard Feren’s sound design makes fine use of classical music – Ruth is an aspiring opera singer – but Cloran could tweak the scene transitions, which seem perfunctory in a production that could be brimming with suggestive signs and symbols.