Wandering through Trinity Bellwoods Park at the peak of summer is like looking at a hyper-realist version of a Where's. 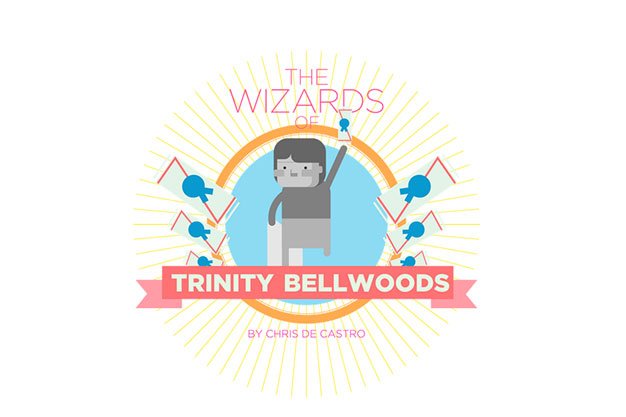 Wandering through Trinity Bellwoods Park at the peak of summer is like looking at a hyper-realist version of a Where’s Waldo scene that was produced by Etsy. Densely packing the parklands with stimulation every season are the slack-liners, the aerobie bros, the drum circles, the antique roadshows, the guy selling the weird sandwiches, and always, that one eternally lost soul who can never seem to find where their friends are sitting. But it wouldnt be Bellwoods without the can and bottle collectors who avidly clean up drinking debris and prevent the park from degenerating into a toppled over IPA keg-stand.

VFX animator Chris De Castro refers to these guardians as the wizards in his own Bellwoods lexicon that he slowly created over the past 13 years he’s spent hanging out there. Now his infatuation with them has extended beyond just secret admiration, and he’s decided to cast them as the heroes of his first game. The Wizards of Bellwoods is currently in development as a mobile game that allows players to take on the role of a ‘wizard’ as they wade through banal freelancers to collect cans and bring balance to the beloved microcosm of the park.

Now, a demo version of The Wizards of Bellwoods is available to try here (you’ll need this plugin to play).

Before Chris took off for the Game Developers Conference in San Francisco, we caught up with him to chat about the wizards, indie gaming and life in Bellwoods.

When did this all start for you?

Around 2003, I graduated from Sheridan College and I was hanging out downtown in Trinity Bellwoods, and my friends and I started noticing can collectors showing up more and more and the park was getting busier. 2006 was when the first inklings of the recession was happening and everyone was between work and hanging out in the parks during the day and they would always be there. The bags started getting bigger and we just noticed they kind of looked like wizards with their bags, their sticks and the way they’d make the cans magically disappear. It became life in the park. They deserve all the respect and the gratitude you can give them. They make the park a better place.

And when did you decide to turn this into a game?

I got into the Artsy Game Incubator workshop two summers ago. We needed to come in with a bunch of pitches for what game you wanted to make for a six week incubator. I had a bunch of ideas and when I mentioned a game about the can collectors everybody just went You have to make this game. Everybody knew who they were. I’m not judging anything with it, it’s just what happens in an urban park, this is what happens in the city. It’s giving a picture of how this ecosystem works. I love systems and seeing how things work and that’s what I want to explore with games.

How long have you been developing it for?

From last summer till now. I got the demo done and presented it at the Toronto Animation Arts Festival, so everybody who was part of the incubator presented on stage. We had a booth and it had a really good reception. There was a kid who was playing a demo at the booth, and he was there for 10 minutes playing the game and asked me, What do I do now? And I was like, “I have to finish it.”

Youre doing this all by yourself. Tell me about that process.

Initially I looked for funding before I realized that because this is my first game, I have to do it on my own. I made it in a program called GameMaker, which is really amazing and got me past the gate really, but if I wanted to make it for mobile I knew I had to code in something else. I taught myself how to use Unity, and took it on like I was studying any other piece of software and learned to code in the last four months. Now the goal is to rebuild the demo, add in a bunch of features, and have that ready for the summer when I’m going to do a Kickstarter. The plan for a Kickstarter is that I want the game to be a free download, so the reward I want to give out is to design you and put you in the game. So everyone you encounter in the game is based off a real person. The reason I’m doing this on mobile is so that you can play the game while you’re in Bellwoods.

What will we see added in the full version?

All the kind of things that would add life to the park: the white squirrel, baseball games, the Dog Bowl, tennis courts all of that life I want to put into the game. Also just fleshing out the story of the wizards, that whole immigration story. My house was the landing zone for my family so at any time I had six of my cousins and their parents living in my basement. So I know that story of when you come to a new country and have to live in this packed room. They come here and this is what they can do. The world is bigger than the park. You choose to go to The Beer Store, or the corner store to get a bigger bag or to go home. Every game mechanic has a real life narrative to it.

Did you research the ‘wizards’ world or speak with any of the people you saw doing the collecting?

I met with a guy who had spoken with them. I learned that there are locations around the city, that they’re very organized and that they make enough money. There was one whose daughter was visiting him in the park and he’s using all the money to help her go to college. One of the stories I heard is there was a homeless guy walking around trying to collect cans and one of the wizards confronted him and he just dropped the bag. He was ensuring his family’s turf wasnt getting harassed. It’s a working system. These people are making their livelihood out of this and it’s legal. But by shining light on it I’m worried about messing with the system. But I can’t go back now.

How has the park changed for you over the years?

In 2003 it was just a few dozen people hanging out. Now in the summer it’s insane. It’s a density I’ve never experienced in my 13 years here. It really feels like the park represents the change that’s happening in Toronto. 2003 was about the Wavelength fest and finding out about all the Toronto indie bands just hanging out and discovering Toronto. Trinity Bellwoods has always been that hub to see what Toronto is doing. The game is about gentrification. So for instance in the game, when a bunch of hipsters are congregating, they’ll start playing music so that will become a wave point to find all the cans. When you get there you can select the music that’s playing. I’m trying to get everybody I ever worked with in music: People like Laura Barrett and Maylee Todd to contribute to the game.

A demo version of The Wizards of Bellwoods is now available to try here (you’ll need this plugin to play).