NOW MagazineCultureTheatreTrudeau and the FLQ

Trudeau and the FLQ

TRUDEAU AND THE FLQ written and directed by Michael Hollingsworth (VideoCabaret). At Young Centre for the Performing Arts (50 Tank. 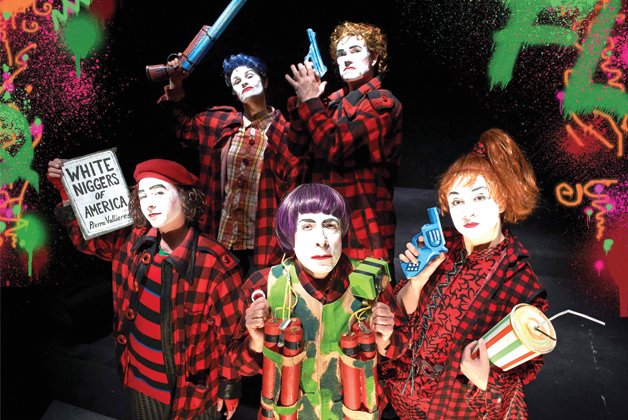 VideoCabaret is now in its second year of production partnership with Soulpepper, and Trudeau And The FLQ – the 1960s instalment of company founder Michael Hollingsworth’s epic 21-part Canadian history series The History Of The Village Of The Small Huts – is the company’s strongest remount in recent years.

Culminating in the harrowing events of the 1970 October Crisis, which saw members of the Quebec separatist movement Front de liberation du Quebec kidnap a British diplomat and a provincial cabinet minister and led to a martial law showdown by Prime Minister Pierre Trudeau, the play begins in the early 1960s with the gradual radicalization of the FLQ and the “mania” surrounding Trudeau’s rise to national prominence.

All the trademark elements audiences expect from VideoCab are in place: insightful historical analysis, the “black box” recurrence of darkness, the ghoulish Brechtian comedy of manners in rapid-fire vignettes. But Trudeau And The FLQ stands out for its even stronger performances and stunning new visual effects.

Stealing the show in the role of Trudeau, Mac Fyfe perfectly reproduces the iconic PM’s voice and mannerisms, playing up his charisma, infamous womanizing and lecture-hall-sized ego to hilarious effect, all while effectively outlining his lofty vision for a new Canadian nationalism.

Adding to the already trippy visual formula, this production makes use of black-lit images and video projected onto a transparent screen in front of the stage. The most effective moment (which brought one of many waves of applause) has Trudeau being interviewed on camera with his back to the audience while the camera’s live feed projects his talking head onto the transparent screen, creating an amazing front/back doubling effect.

If you’ve never seen a VideoCab production, this is the one to catch. If you’re a fan, expect to be wowed once again.