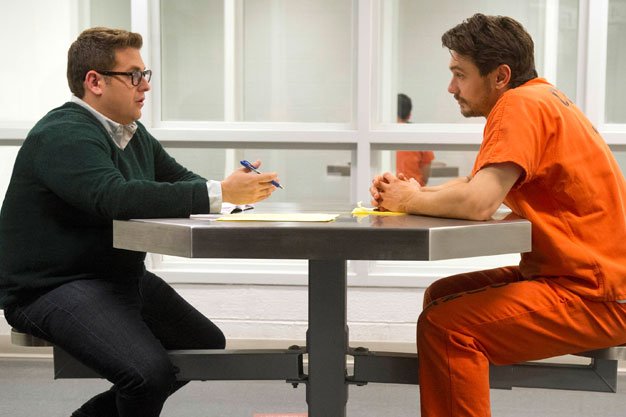 What’s fascinating about Rupert Goold‘s True Story is how much of it feels like, well, bullshit.

Based on actual events, TV director Rupert Goold’s first feature focuses on Mike Finkel, a disgraced New York Times Magazine writer who in 2002 discovered that his identity had been used as an alias by a fugitive from justice.

Jonah Hill plays Finkel, and James Franco is Christian Longo, who was being hunted in connection with the murders of his wife and children. Once Longo was captured, Finkel reached out to him their subsequent conversations led Finkel to write a book, and here we are.

Director/co-writer Goold sees Finkel and Longo’s relationship as a chilly Foxcatcher psychodrama about a toxic friendship, though that’s at odds with the story and its telling and with Hill and Franco’s performances, which can best be described as overly cautious.

The movie keeps pressing home the stranger-than-fiction details of the story, which largely boil down to the not-so-amazing coincidence that a desperate, calculating liar would latch on to a journalist who’d just been hit with a fabrication scandal.

But what’s ultimately most compelling about True Story is its reliance on cinematic tropes like flashbacks and dramatic revelations to jazz up the fact that absolutely nothing interesting is happening.