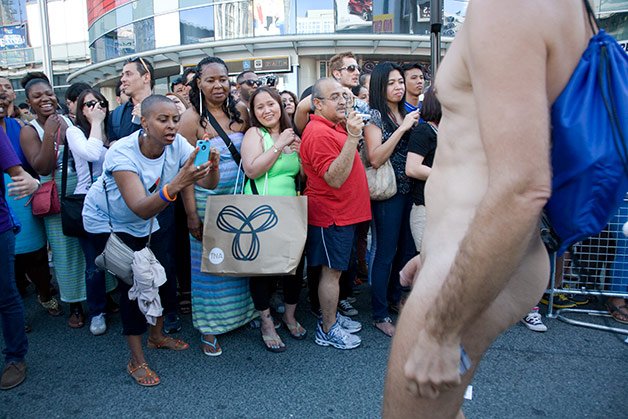 Debate over a Toronto District School Board trustee’s bid to ban boobs and bums at the Pride parade will have to wait another month. A seven-and-a-half-hour board meeting ended Thursday, March 6, before trustees could debate the controversial motion tabled by Sam Sotiropoulos.

Since the TDSB has a float in the parade, the Scarborough-Agincourt trustee says he wants “clarification” from the mayor and city council about whether it intends to enforce Canada’s public nudity laws.

Although public nudity is legal in places where it’s expected, like specific beaches and Pride parades, Sotiropoulos maintains that nudity at the parade is illegal.

“[Pride] is supposed to be a family-friendly event,” he said in a scrum after the board meeting. “If you went to any other ward in the city on that day and paraded around naked, you would likely be arrested.” He believes this is “a municipal enforcement issue.”

In an interview, Bert Bik, founder of Totally Naked Toronto Men Enjoying Nudity (TNTmen), a group of older nudists, mostly gay, who have been a fixture in the parade since 1997, says he believes nudity is natural.

“I have seen many people watching Pride shield the eyes of their children when nude people walk by, and that’s fine. Nudity isn’t strange for kids. Parents make it strange,” he says.

Before the board meeting, Sotiropoulos lost trustee Irene Atkinson’s support. She backed down following angry emails and phone calls from “an amazing number” of LGBT families in her ward, but doesn’t “believe that people should be running around naked in the streets – simple as that.”

Sotiropoulos calls accusations that he is homophobic “slanderous.” Last month, the embattled trustee took to Twitter to accuse members of the LGBT community of “homosexism,” which he defined as bullying by “homosexuals against heterosexuals.” This is what he tweeted: “One of the most divisive influences in Canada today is #homosexism it’s disseminators are maliciously rabid.”

When asked for the meaning of “homosexism” – the word is not in the dictionary – Sotiropoulos cited UrbanDictionary.com, a crowd-sourced slang directory to which anyone can contribute “definitions.”

On his 2012 campaign website, Sotiropoulos described himself as a “strong believer in traditional family values.” His Pride motion is uninformed by any understanding of the law.

In 2000, the charges of public nudity against seven men at Toronto’s Pride parade were dismissed by the Crown. The key part of that decision was that their nudity took place in an environment where it was expected, as at Hanlan’s Point. A 2012 Ontario Court of Justice decision again affirmed the constitutionality of Canada’s public nudity laws by upholding the conviction of a man who walked naked to a Tim Hortons window, an unexpected place.

In local schools, some teachers are concerned that Sotiropoulos’s motion could result in the cancellation of the TDSB Pride float.

Joy Lachica is a Grade 7 and 8 teacher at Duke of Connaught Junior and Senior Public School at Queen and Greenwood. The out lesbian says queer youth, especially those who aren’t out yet, are inspired by the TDSB float filled with dancing students from the board’s many gay-straight alliances.

The TDSB has traditionally “been a leader in equity,” and she worries this would be a step back. “That would be doing students a disservice,” she says. “I know many students who march behind that float because they feel affirmed and acknowledged.”

“Pride works very hard to make sure everyone is included, is safe and can express themselves, and we don’t get in the way of that expression,” Beaulieu says. “One of the most heart-warming changes in recent years is seeing kids with their parents out waving the rainbow flag.”

The history of nudity at Pride celebrations goes back to its early activist roots at the Stonewall riots in New York City in 1969, considered the birth of the gay rights movement.

In Toronto in 1981, nude and semi-nude men were targeted by police at four gay bathhouses in a series of raids, a seminal moment in local LGBT history that resulted in the arrest of around 300 men. The response from the community was immediate and angry. Thousands took to the streets in protest.

Those demos, in part, helped give birth to Pride, an event that is part celebration and part protest for sexual and body liberation. In recent years the number of people marching nude has actually been quite small, despite what Sotiropoulos tells the media, says Bik.

When people refer to nudity at Pride, they’re usually talking about the 10 per cent of TNTMen’s 350 members who march in Pride.

Bik, a grandfather of two, says, “For me, nudity is such an amazing thing because it’s the natural state of who we are.”

“They had an entourage with them, and we had the privilege of marching behind a good number of bums, and it was wonderful,” she says. “The purpose of Pride is not to normalize gay culture. We don’t want our gay children to conform to straight culture. We want them to be accepted exactly as they are. If that’s leather chaps and bare bums, then that’s what we’ll love.”