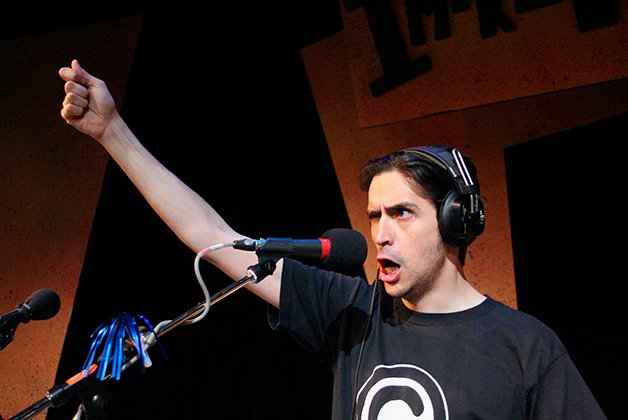 CBC Radio’s Irrelevant Show will experience a first at the Toronto Sketch Comedy Festival – and so will its audience.

The Edmonton-based sketch program’s live show at the Randolph Theatre will be its first-ever live taping outside Alberta.

But this eastward trek won’t be the first time in its five seasons that the fast-paced sketch program has proven geography to be… well, irrelevant.

“We have a writing crew that spans the whole country, ” says Mark Meer, an original cast member and writer for the show.

Fans shouldn’t expect the live show to be an exact match with what airs later. Meer says the live audience will witness more “quality horsing around” onstage than the radio audience will hear, and while live recordings typically produce two episodes’ worth of material, they can also features sketches that don’t make the broadcast.

“We do more material than we need,” he says. “Some might get saved, moved into other episodes. And of course, we do more so we’re free to discard some material that’s not working.”

By not relying on topical material, the show has the luxury of letting those sketches linger on the drawing board. There may still be hope, for instance, that listeners will hear one of Meer’s recent personal favourites featuring a dark metaphor about Great Danes.

“A lot of owners of large-breed dogs in the audience that night,” Meer says.

Creating an audio-only end product has its advantages. The show doesn’t have to shy away from a mid-scene change of setting or an occasional adventurous plot twist. Plus, relying on listeners’ imaginations is budget-friendly.

“In radio you really aren’t limited by anything,” says Meer. “If you can make a sound effect for it, you can make it happen.”

The Randolph Theatre audience may still find their imaginations useful, but Meer promises “a richer experience” than listening at home, in part because they’ll see how those sound effects are generated.

The vintage foley equipment they had shipped to Edmonton early in the show’s run has proven cumbersome compared to what an iPhone can do, but the show’s foley artist, Dave Clarke, does use some old-fashioned methods onstage.

If a fist fight breaks out mid-scene, says Meer, “you’ll get to watch Dave punching a head of cabbage.”