Have you or your children ever wondered. 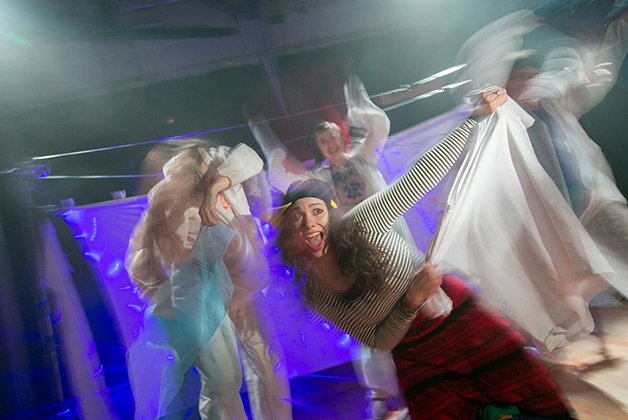 The Tale Of A T-Shirt

Have you or your children ever wondered about the source of the T-shirts your family probably wears?

The Tale Of A T-Shirt, aimed at young audiences from 10 to 16, follows the history of a T from seed to cotton to cloth.

FIXT POINT Theatre, which creates community-based works involving site-specific performance and audio art, has, with the help of Theatre Direct, revised a 2007 work for general audiences in light of recent events in Bangladesh.

The show now looks at globalization from a new perspective, hoping to develop social consciousness in young people and help them think about the wide-ranging implications of their actions.

Still, this isn’t a show that preaches. Under creator/director Lisa Marie DiLiberto, the four clown-trained performers – Lise Cormier, Nina Gilmour, Norah Sadava and Marissa Zinni – use live music, puppetry, documentary material and game-playing to look at the origin and journey our clothes take before we wear them.

Public performances are Friday and Saturday (March 7 and 8) at Artscape Wychwood Barns. If you’re looking for something to do with your kids during March break, this show will not only be fun but also begin a good discussion.

If you want some other theatre-related shows to share with the children next week, check out productions by Toronto’s best family puppet company and a touring show based on a kids’ classic.

Puppetmongers’ Ann and David Powell are best known to young audiences for their Christmas shows, including Tea At The Palace, Cinderella In Muddy York and Bed And Breakfast.

For March break, the sibling duo bring back the show that launched their career four decades ago, The Miller And His Wife. Adapted from a pair of folk tales, the award-winning work follows the fortunes of a poor family who foil a bully, outwit a nasty civil servant and eventually make connections to royalty.

Aimed at audiences eight and up, it plays at Theatre Passe Muraille through March 15.

Across town, Young People’s Theatre offers Where The Wild Things Are, based on writer/illustrator Maurice Sendak’s hugely popular book about the testy young Max who, sent to bed without dinner, launches himself on an imaginary voyage to the land of wild things.

Expect some audience interaction, with viewers, seated on the theatre’s floor, becoming the animals in Max’s adventure.

The Presentation House Theatre production, directed by Kim Selody, features Raes Calvert as Max and Linda A. Carson as his mother and the show’s narrator.

The award “straddles and unifies two worlds that were essential to Patrick: theatre and sustainable living, including the sustainability of food production in our environment.”

Two recipients from either or both of these disciplines each receives $2,500.

To apply, applicants must submit a one-page statement outlining why they deserve the award a half- to one-page outline about a community engagement project, art/theatre piece or community action that has inspired them a half- to one-page personal remembrance or specific researched finding about Conner that inspired the application or call to action a CV or resumé of one to two pages and two supporting letters. Please do not send more material than requested.

Applications by email only (PDF preferred, Word Doc acceptable) to pconaward@gmail.com. Questions can be addressed to the same email. The award’s website is patrickconneraward.com.

Previous applicants are welcome to reapply.

Deadline is April 15 successful applicants will be notified by July 1.

The award will be presented at a ceremony on the Carrot Common’s green roof August 18. Recipients must be available to attend the ceremony.

The committee for the Gina Wilkinson Prize, honouring the memory of actor/director/writer Wilkinson, has announced the short list for the 2014 award, $2,000 presented to a female theatre artist making the transition to directing from another area of theatre.

The winner will be revealed on March 10, Wilkinson’s birthday.

You probably know Eve Ensler’s The Vagina Monologues, which has been staged several times in Toronto.

Now Jennifer Phillips, a writer and Hollywood fight choreographer, has combined parts of Ensler’s work with her own play The F Word, nominated for an Amnesty International Freedom of Expression Award.

Presented as part of International Women’s Day and to raise awareness of women’s rights and causes globally, The Vagina Monologues Meets The F Word runs for seven performances, presented by 360 Productions at Buddies in Bad Times.

The March 13 performance is a charity night, with discounted tickets audience members are encouraged to donate to the Centre for Women’s Studies in Education at the U of T, and Nellie’s Shelter.

If you need proof of the quality of Soulpepper’s musical team, all you had to do was attend the company’s first two salon productions, Berlin To Broadway and Aboard The Orient Express.

We’ve already talked about the former show, and the latter, which had a two-performance run last week, offered a slew of fine songs and performers.

Set aboard a train travelling from London to Istanbul in 1939 – turned out it was the final trip before the outbreak of war – the show drew on music suggested by the various stops on the journey: Calais, Paris, Amsterdam, Strasbourg, Munich, Zurich, Vienna, Venice and Budapest.

There was lots of choral music in the show, notably a simple, heartbreaking, wordless version of a Haydn tune that developed a strikingly different resonance when it became the melody for Deutschland Über Alles. We loved the closing number, in which the company joined in on a stylistically diverse remix of the Stones’ You Can’t Always Get What You Want.

Happy to hear there will be more salons next summer.