My income does not meet the minimum poverty level, so without regular, fulltime employment I just can’t afford to get around this wondrous city. What's the answer? Free. Public. Transit. 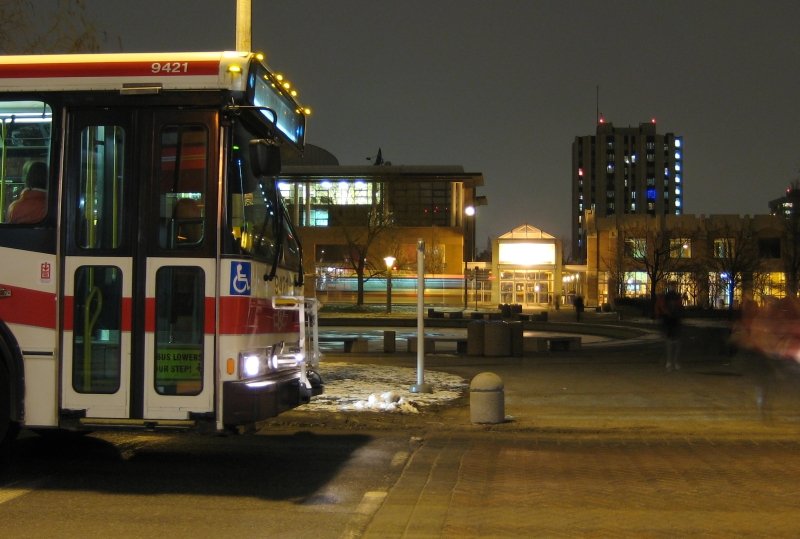 My name is Darth Fare Evader and I’m a scofflaw.

Yup, I frequently use the TTC and hardly ever pay. How? Well that’ll stay my secret for the time being. Do I feel guilty about it? Not really.

Here’s the thing. My income does not meet the minimum poverty level. So without regular, full-time employment I just can’t afford to get around this wondrous city.

Cars are great. They can take you almost anywhere – if you can afford to buy one and pay for the gas. And repairs. And insurance. And parking.

Alas, biking in winter is something not to be taken lightly. Besides, Toronto is the bicycle theft capital of North America. So where does that leave people like me? Walking? I love my neighbourhood but in a city like Toronto there should be no barriers to public transit. None.

A round trip adult cash fare is $6.50. That’s a meal off my table. I have to really need to be somewhere before deciding to spend that kind of money on transit.

If I have a job interview that requires a bus or subway ride I can’t chance the cost unless I think there’s a reasonable shot I will get the job. No trips to the library on bad weather days, either. Can’t afford it.

If I am on a streetcar going past my favourite sandwich shop and I want to hop off because they have these great, delicious deals, I’m outta luck. I can’t spend an additional $3.25 to get back on transit just to buy a sandwich.

So what should be done? If I’m caught should I be fined hundreds of dollars or go to jail? What would that solve? It amazes me when politicians think the answer to poverty is to take more money – or the ability to earn it – away from poor people.

What’s a mayor to do? Hmm. Raise the fares so even fewer people can afford to ride the TTC? Just did that. Hire more security to catch fare evaders? Ditto. Council has agreed to a fare pass discount for low-income riders earning less than $22,000 a year, but that won’t come into effect until 2018. What’s the alternative? Free. Public. Transit.

“That’s insane” you say. Hardly. It’s been successful in dozens of cities around the world as well as in parts of Canada. Calgary’s C-Train is free. Halifax runs a free bus service downtown during the summer months. Is it a perfect solution? No. It might not be easy to implement and it would take a lot of work. The biggest challenge is obviously the cost. How would the millions of fare dollars be replaced?

No doubt the private sector would be happy to put up a good chunk for access to the millions of weekly riders. But it’s the province that would have to greatly increase the amount it already provides.

Gee, wouldn’t that be a tough sell in Sarnia or Timmins?  Well not if the premier commits to mobilizing all of Ontario.

Public transit should be a right. Any city of a certain physical size and a large enough population should have a transit system of some kind available free to its people. Businesses that might otherwise leave jobs unfilled because of the distances involved to get there, would employ people.

Also, when you don’t have to worry about having tokens in your pocket you go out more. You want to treat the kids to a movie downtown but parking means no popcorn.

Then there are the people with doctors appointments who can’t get across town because it’s the end of the month and the money doesn’t stretch far enough. Are they any less deserving of medical care because OHIP doesn’t cover transit?

At least with the Metropass, people can make quick trips when needed. Pick up that sandwich, book, bottle of wine or just get out of the rain for the few blocks to the coffee shop. They don’t have to worry it’s going to punch them in the wallet every time they want to get on transit. So naturally, the city wants to get rid of it, replacing it with the Presto card.

Politicians love to talk about how we are a world class city. But have you seen the subway map of New York City or London or even Montréal’s Métro? Compared to them we’ll never stack up as long as we measure our system by our wallets.

Yes, we need subways. And buses. And more. Toronto’s a big city, more than 630 square kilometres stretched out roughly 40 kilometres east to west and 24 kilometres north to south. But it would be nice if I didn’t have to spend over $1500 a year to get around it.