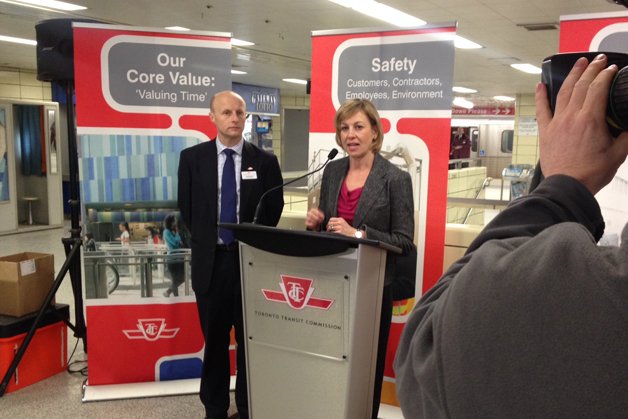 At a press conference on the southbound platform of Bloor-Yonge station, commission CEO Andy Byford and outgoing board chair Councillor Karen Stintz unveiled the document, which sets out 39 targets to improve riders’ experience.

“Having a customer charter is tangible evidence that we’re serious about customer service,” said Byford. “We don’t just pay lip service to it, we mean business.”

The targets include: ensuring all service is “reliable and on time” communicating any delays clearly and in advance better signage and more digital information displays adding 20 bus route supervisors to deal with bunching installing debit and credit machines at all collector booths continuing the rollout of new vehicles and the Presto system and spring and fall cleanings of all subway stations.

Stintz, who is resigning as chair next week to run for mayor, said the charter builds on progress made under her term.

“We have, at the TTC, spent the last three years with an intense focus on improving customer service,” she said, asserting that she will have left the commission on a path to becoming “a transit system that makes Toronto proud.”

The new charter comes as the commission continues to struggle with crowding on its busiest surface routes and especially the Yonge-University-Spadina subway line. Byford denied that the charter is simply window dressing to distract from those issues.

“Some people have said that announcements like this are superficial. I actually don’t think customer service is superficial, I think it’s really important,” he said.

“Don’t get me wrong. We know that the most important thing is to provide regular, reliable services. But if at the same time, we can make that a more pleasant journey, I think we should.”

After the press conference, TTC staff fanned out across the station as part of a “meet the manager” event. Reactions to the new charter from passengers was mixed.

“I hope this is something that will benefit the riders,” said Jennifer Gray. But she didn’t sound hopeful that the TTC was close to fixing issues with her local Lansdowne bus route, which she says doesn’t travel north of St. Clair frequently enough to keep up with demand.

Tilla Reyhani said she’s been riding the subway from Finch to downtown since June and it’s “not a fun ride.”

“In the afternoon it’s a nightmare. I usually wait until five or six trains pass by, and then I get on the train,” she said.

But some riders have noticed the system getting better.

“I think there’s been a really good improvement in the cleanliness, especially of the subway trains. Because it used to be absolutely disgusting,” said Marianne Clark, a retiree who takes the train from Islington twice a week.

Some of the TTC’s biggest problems won’t be solved in the short term. New lines, most urgently the downtown relief line, need to be built in order to keep up with growing ridership, which is expected to reach a record 540 million passengers this year. Byford said he’s working on that too. One of the charter’s goals is to form a task force to seek funding from senior levels of government, and the CEO said he hopes to travel to Ottawa within the next six weeks to request a portion of a $4-billion infrastructure fund the federal government announced this week.

Byford had the chance to plead his case directly to the prime minister on Thursday when Stephen Harper was in town to tour the Spadina subway extension. Byford said he used the 20-minute visit to put a “little seed in [the prime minister’s] mind” about the need for a relief line.

“He was really interested,” Byford said. “He understood that there is a need to continue to invest in our subway network.”

Getting funding for the relief line could be difficult, however. The federal government has already signalled it will contribute $660 million for the controversial three-stop Scarborough subway extension Stintz helped shepherd through council.

The $3.6-billion extension is expected to worsen congestion on the Bloor-Danforth line, and before it was approved by council last fall TTC staff determined it was not nearly as much of a priority as the relief line.