NOW MagazineMusicTwenty-five years of Rotate This

Twenty-five years of Rotate This 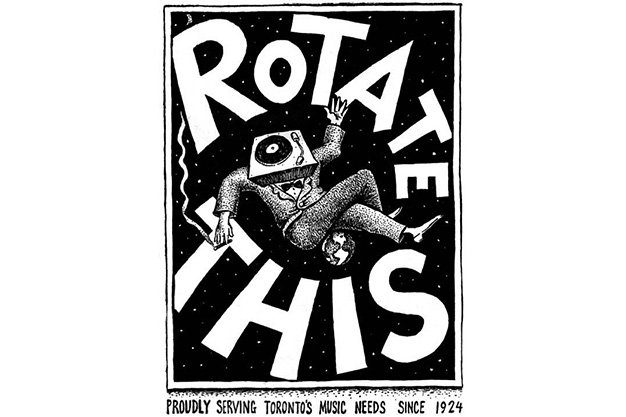 ROTATE THIS! BIRTHDAY BASH with sets by DJ EWAN EXALL and others at Rotate This (186 Ossington), Saturday (October 29), 11 am-8 pm, free. rotate.com. See listing.

In 1991, the release of Nirvana’s Nevermind changed music forever. A few weeks later, Rotate This opened its doors on Queen West, just in time to sell copies of it.

Nirvana may no longer be with us, and the shop is no longer on Queen West – it relocated to 186 Ossington in February – but it still sells copies of Nevermind more often than you’d think.

This week Rotate This celebrates 25 years of supplying the city with Nevermind and more.

Toronto is no doubt filled with music lovers, but that hasn’t kept a number of Rotate’s competitors from shutting down in the last quarter-century. The list is long – the Record Peddler, Vortex, Ed’s Record World, Criminal Records and Hits & Misses, to name a few – so Rotate owner Pierre Hallett doesn’t take the store’s longevity for granted.

“It doesn’t feel like 25 years at all,” he says. “It feels more like 10 years. It is a big accomplishment for a store to make it that far. It’s massive.”

Where many shops struggled to cope with slumping CD sales, Rotate This thrived by stocking vinyl from the get-go. And as of 2016, it’s the only format it sells.

“In the heyday we were about 50 per cent vinyl, 50 per cent CDs, and into the 2000s, the CD dropped off to where there was no point in stocking them at all,” says manager Brian Taylor, who joined Hallett in 1993.

But despite its success, like all bricks-and-mortar shops, Rotate still has its challenges. The biggest one, according to Taylor, is getting the amount of product the shop needs from distribution companies on a timely basis. “That’s my biggest bitch about trying to be a record store in 2016,” he says.

“You want to help your customers and you want to have something, but you continually have to make up stories as to why you don’t have it,” adds Hallett. “It’s frustrating for customers, so they go home and buy it online. It changes the experience. I think it’s amazing that people want to come to a record store.”

And over the years some amazing people have come into the store.

“Around 1998, this scrawny-looking dude walks through the door and gives me the shifty eye,” Taylor says. “I’m bad at spotting famous people, and I thought it might be some homeless guy because that [former] location was a little weird. And then one of our employees at the time, Kevin [Hegge], came running in freaking out, going, ‘It’s Prince!’ Another time Prince came in and wouldn’t actually touch the records. He had his bodyguard flip through them.”

“And 20 years ago, this unshaven, dirty guy with a baseball cap pulled down was looking around,” says Hallett. “He comes up to the counter, and I still don’t know who he is, and this kid walks over and says, ‘Dude! I love your films!’ So he gives me his credit card for his Link Wray 7-inch and something else, and I run it and look at it and go, ‘Holy shit, that’s Quentin Tarantino!’”

On Saturday, the shop throws itself a birthday bash that includes “surprise DJs, cake, pizza, possibly some live stuff, a big sale where people will save money on records and some giveaways, too.”

The celebration is as much for the patrons who have kept Rotate going for 25 years as it is for the store itself.

“I think it’s a great city to have a store in,” says Hallett. “There’s an awful lot of competition, and that keeps everyone honest. Thanks, Toronto!”