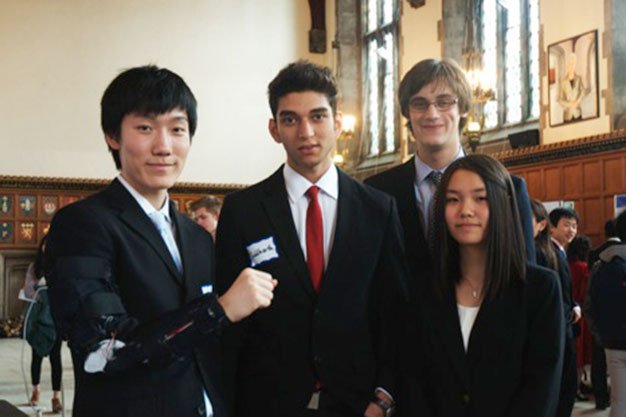 This is not your average science fair.

Held in Hart House’s Great Hall, the Praxis II showcase was the culmination of a unique addition to U of T’s Engineering Science program: A first-year course that has students finding ways to help small-scale community operations become more efficient.

“We want our students to get out there and engage in the community themselves, instead of the traditional engineer stereotype of having people come to them with work,” says course instructor Jason Foster.

That engagement was fruitful: Students designed a grocery delivery system for the West End Food Co-op to improve access to nourishment. Another team designed faster worm extraction in compost for the Evergreen Brickworks another has designed a more efficient bottling process for Oakville’s Black Oak Brewery. One group is developing a tremor guard for sufferers of Huntington’s disease, inspired by a friend.

Approximately 270 students spent six weeks from the start of the process until the April 10 conference. Students approached local organizations and businesses to see how engineering design could be used to make a part of their lives easier. Foster and other instructors will narrow more than 60 proposals down to between eight and ten, and then four to eight teams will compete on each proposal for their project to be greenlit.

“This year we really pushed them to engage more directly,” says Foster. “We were saying, if you read about it in the paper, in NOW Magazine say, go and call them. Find out how they see their business and the world around them, and see how an engineering perspective can add to that.”

In its early days, the program focused on civic infrastructure issues – Foster notes that almost every year they worked with the TTC. But there’s only so much that an educational program can contribute to something so large-scale. This year, they decided to tackle more manageable issues.

For Foster, the program isn’t so much about coming up with solutions as it is teaching his students how to become a part of the local conversation.

“Are these going to be on the market next year? No, probably not,” he says. But he’s quick to point out that the goal is more organic than that.

“Are they informing how conversations and issues in the community are evolving and progressing? Yes. And that’s all we’re really asking for.”