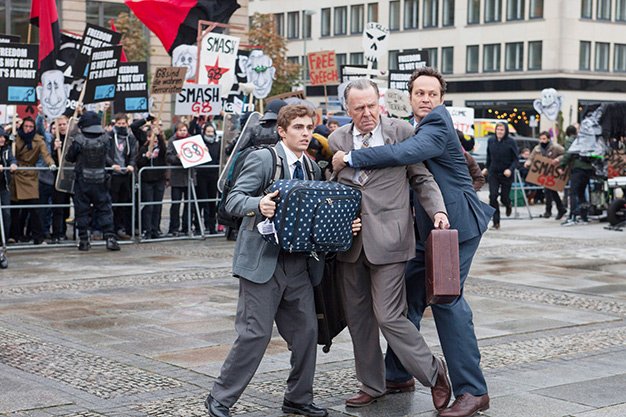 Where to watch: iTunes, Netflix

Vince Vaughn is making the leap from slapstick to serious work with True Detective, but first he’s got some Unfinished Business. The Wedding Crashers star’s latest unfunny raunchy comedy awkwardly tries to incorporate the more grown-up themes he’s been toying with lately.

Jammed between pratfalls that include a man’s face and a penis coming together is a sentimental story about the challenges of being a good, supportive dad. The movie wants you to hug your family – but wait, whoa, look at those tatas!

Vaughn plays a salesman who quits his job in mineral supplies and begins his own competing venture with a pair of barely capable recruits played by Tom Wilkinson (he’s too old, ha-ha!) and Dave Franco (he’s developmentally challenged, ha-huh?).

Disability was French-Canadian director Ken Scott’s manipulative go-to device to inject tenderness into Starbuck and its English-language remake, Delivery Man, which also starred Vaughn. Here, Franco’s Mike Pancake , with his unspecified disability, is the butt of several jokes but also the focus of a feel-good plot turn.

He is the uncomfortable connection between vulgar comedy and syrupy emotion that Scott fails to balance. The laughs don’t get caught in your throat so much as make you want to gag.