NOW MagazineNewsUse your head: the debate on helmets

Use your head: the debate on helmets

The numbers versus the nuances 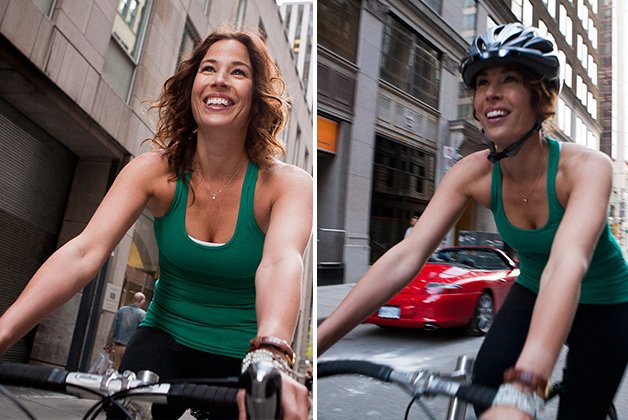 As a cyclist, I’ve been hit by both a cab and a streetcar. If I’d gone down in either of those instances, the question of whether a helmet would have saved my life is a matter of much debate among doctors and cycling advocates.

The medical research suggests that helmets save lives. The Canadian Medical Association Journal states that helmets can reduce the risk of head injury by 85 per cent and that 75 per cent of all bicycle-related deaths are due to head injuries.

According to the Ontario Coroner’s most recent Cycling Death Review, released in 2011, 27 per cent of cyclists who died in the course of the four-year study period in this province were not wearing helmets.

In fact, Deputy Chief Coroner Dan Cass, who headed the review, says, “Those who died of head injury [were] three times more likely not to be wearing a helmet than those who died of other injuries.”

To see if these numbers have influenced the cycling community here, just watch at any major arterial and count how many cyclists are wearing helmets. From my own head count, it’s about 50/50.

Aside from the black-and-white figures, the controversy around legislating helmet use is a dandyhorse of a different colour.

“There [are] lots of arguments against mandating helmet use,” says Cass.

A CMAJ study in Halifax found there was a 42.5 per cent drop in cycling numbers the year after a helmet law was introduced, and the Institute of Public Affairs in Australia says cycling trips declined 30 to 40 per cent after a law was enacted there in 1990s.

However, Cass says observational studies like the one from Australia fail to take many factors into account, including (a major determinant of cycling) weather changes during the study period.

For the anti-helmet set, the reasons for letting your head breathe vary from the cost of helmets to the idea that the law would make cycling seem inherently dangerous.

Cycling advocate Derek Chadbourne says brain buckets range from $30 to more than $300. But for some people stretching a dollar in tough economic times, even $30 makes a difference.

A $29 ticket for not wearing a helmet landed BC’s Ron van der Eerden in court to fight the fine. He eventually lost his case, but family doctor Thomas DeMarco, who supported his argument, continues to fight helmet laws.

DeMarco is against making helmets mandatory because it treats the “symptom and not the cause,” though he wears a helmet on his daily ride to work.

“Cycling itself is not inherently dangerous,” he says.

The road-sharing problem is one Ron Freeman, who has worked as a bike messenger in Toronto since the 90s, takes issue with, too. Compared to Berlin’s, he says, “Toronto’s infrastructure is behind the times.”

Freeman says cyclists often have to break the law to navigate our streets.

If you’ve ever tried to make a left turn on your bike, you know “it freaks drivers out,” he says.

All agree that traffic calming zones, separated bike lanes (similar to those on Sherbourne) and better driver training would help reduce injuries and deaths.

“All road users should know how to share the road with cyclists and pedestrians,” says Cass.

The idea is accident prevention, but “more than 20 of 129 deaths [in the report] were people who simply fell from their bikes.”

Taking a spill is something most city cyclists have experienced.

Freeman has fallen from his bike and been hit by vehicles many times, always without a helmet, and he’s never “cut or even scratched” his head.

In 2000, though, he was in a “major door prize accident,” pulled under the back axle of a tractor-trailer. Although his right side was crushed and he was in the hospital for nine months, undergoing 10 surgeries, Freeman won’t wear a helmet. Even the kilogram of metal holding his right hip together hasn’t changed his mind.

However, if he had children, he’d want them “to ride with helmets, because [they’d] be used to it” by the time they were 18.

According to the present provincial law, all riders under the age of 18 must wear helmets. The set fine is $60. But Ontario’s deputy coroner feels helmet use is undermined if adults aren’t subject to the same law. Only one of the study’s 16 cyclists under the age of 18 was wearing a helmet when killed. “Clearly, [given these] child fatalities, adults are not modelling the right behaviour for children,” says Cass.

Many of today’s road warriors started riding before Ontario’s law came into effect in 1995.

The Cycling Death Review notes that the numbers of riders killed were greatest in the 21-to-40 and 41-to-60 categories – people who came to biking both before and after the present legislation. Again, it seems the law hasn’t yet had the desired effect.

For Cass, “Survival is preferable,” and helmets save lives.

But BC’s DeMarco, who sees the heady issue as a matter of survival of the fittest, opposes helmet laws.

Statistically, more people “die of heart attacks than of head injuries,” he says. “The average cyclist – helmet or no helmet – lives longer than the average non-cyclist.”

“For every person you can get out of a car and onto a bike, [you’re] not only making them healthier but [also], of course, increasing their cardiovascular fitness and decreasing obesity, which therefore reduces risk of heart attack.”

He goes so far as to say he’d “like to see a mandatory helmet law for motorists, because in absolute terms we lose more brains” to motor vehicle accidents than to cycling accidents.

I’ve never worn a helmet while driving my car, but ever since my own near-death experience, I’ve worn one when I bike. Until our cycling infrastructure improves, or cars start flying, I’ll keep wearing it.

If you put the fun between your legs, put some thought between your ears and consider what you’re risking with or without a helmet on your head.