Win a pair of tickets to special screening and red carpet reception for Uzumasa Limelight on November 26th at the Japanese Canadian Cultural Centre! 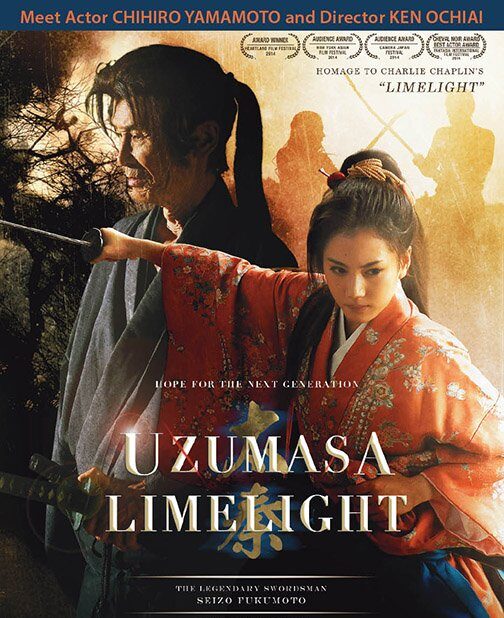 We are very excited to announce star Chihiro Yamamoto and director Ken Ochiai will be visiting the JCCC this month for a special screening, Q&A and post-screening  sake/sushi reception.

A moving, nostalgic portrait of the men behind the golden age of chanbara (sword-fighting dramas and films), Uzumasa Limelight—whose title refers to a Charlie Chaplin film about the twilight days of a stage actor—goes behind the scenes of Japan’s most distinctive film genre. Its protagonist is a professional extra named Kamiyama, who has devoted 50 years of his life as a kirareyaku in sword-fighting movies produced at Kyoto’s Uzumasa Studios. His specialty? He lives to die. Or more exactly “to be cut” and die a beautiful, spectacular death on the silver screen. Kamiyama, played by real-life kirareyaku Seizo Fukumoto, whose imposing physical presence dominates the film from start to finish, has become a master of the art, with his own signature style of falling down dead. Now an elderly man, he lives in very modest circumstances, but has earned immense respect from his more prominent peers, some of them movie stars. When the studio decides to discontinue its chanbara productions, Kamiyama finds himself at a loss: what will he do for the rest of his life? How can he use his specialized skills? Hope arrives in the form a young girl named Satsuki (Chihiro Yamamoto), who soon becomes Kamiyama’s disciple. Will the art of dying by the sword live on?

Enter to win a pair of tickets to special screening and red carpet reception for Uzumasa Limelight on November 26th, 7pm at the Japanese Canadian Cultural Centre!