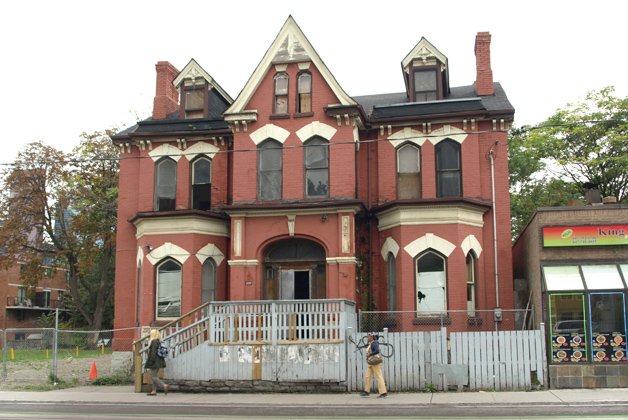 It’s old and shabby and sits beside a vacant lot, but 230 Sherbourne once had cachet. The stately red home was built in 1872 for a furrier and his family, and its gables and terracotta trim are a reminder of the downtown east side’s former prosperity.

A rooming house for decades, it now sits empty and forlorn, facing a church where the neighbourhood’s less fortunate congregate for meals. On September 22, though, it got lots of company when Ontario Coalition Against Poverty activists held a short-lived occupation of the property in an attempt to call attention to the area’s rapidly disappearing housing for the poor.

After scaling the house to hang banners on its exterior, the group set up a barbecue and sound system on the vacant lot to the south – property owned by the same landlord – and within hours were evicted by police.

The organizers’ message was to the city: expropriate vacant buildings in gentrifying areas, turn them into affordable housing, and put 230 Sherbourne first on the list. Isn’t there a moral responsibility to maintain space for the dispossessed in transitioning neighbourhoods, they asked?

“The building is a flashpoint for the neighbourhood,” says OCAP’s John Clarke. “In 1985, Drina Joubert froze to death outside that house in an abandoned truck, so we chose to make it a symbol.”

OCAP points out that in 2010 the city used its powers of expropriation to take over 1495 Queen West to create Edmond Place in needy Parkdale, though unlike 230 Sherbourne, that building had been abandoned.

The group is not impressed by the distinction between an abandoned building and a vacant one, saying no structure should be boarded up during an affordable housing crisis.

But expropriation can be a very long process, says Gil Hardy of the city’s Affordable Housing Office. “So it’s not the most efficient way of creating affordable housing. In the case [of Edmond Place], the building had been gutted by a fatal fire and then stood vacant for 10 years. Expropriation was a way of not only facilitating affordable housing but also improving the neighbourhood.”

Certainly, the owner of 230, Bhushan Taneja, was shocked by the OCAP bid. “I felt there was no law and order in the country,” says Taneja, whose large real estate portfolio includes other rooming houses. “How did they dare to ask [for expropriation]?”

Taneja had initially planned to tear down 230, but a last-minute heritage order forced him to keep it standing. A more recent order compelled him to make repairs. Last week, workers were fixing holes in the roof and battling a raccoon infestation.

Taneja does not want to discuss his plans for the properties. In 2009 he applied to the city to put a high-rise on two vacant lots south of 230.

With real estate prices soaring, rooming-house landlords are increasingly closing their doors, preferring to make money from rising property values. As spaces decline, decent private rooms have gone up to $400 and $550 per month – no small sum for someone living on day-labour wages or government help.

But while there’s no political appetite to go after empty buildings, the idea of expropriation as policy has made the rounds before. A 2008 study for U of T’s Cities Centre recommended a use-it-or-lose-it bylaw that would define abandonment and outline consequences, including expropriation for housing. At that time, it said there were “hundreds” of abandoned buildings in Toronto.

The idea resurfaced in a report adopted by council in 2009, though as Hardy points out, no further work was done. Properties, he says, often appear abandoned but aren’t sometimes they sit empty while owners amass other buildings for redevelopment, or are caught up in legal red tape after a death.

David Wachsmuth, a PhD student and co-author of the Use It Or Lose It report, says the challenge is to create “incentives for landlords so that instead of keeping buildings vacant, it would be more rational to use them.

“In doing research, there was evidence of landlords sabotaging their buildings so they could get permits to tear them down,” he says. “That might be good for a developer, but it’s not good for the citizens of Toronto.”

Michael Shapcott, the Wellesley Institute’s director of affordable housing and social innovation, has a similar take. He says there are plenty of reasons why expropriating empty houses might be logical, such as improving the look of a neighbourhood or improving safety by preventing fires caused by squatters using candles.

But he says a more saleable tactic is for the city to reinvent the way it uses its tax code. “Instead of a low tax rate on abandoned buildings, you could reverse that and say we’re going to impose the highest tax rate,” he says.

With about 90,000 families on the wait list for affordable housing, a mayor focused on subways, and a federal government that barely bats an eye at Toronto, the housing problem is hard to overstate, says local councillor Kristyn Wong-Tam. A good start would be converting vacant provincially owned properties like 26 Grenville and 27 Grosvenor to housing, something Wong-Tam has petitioned Ontario to do.

“I’m prepared to do the work that needs to be done, but I can’t expropriate someone’s land,” she says.

Plus, there’s another issue. When public housing spaces do open up, recipients often have to relocate across town, which can take a large social toll, according to David Reycraft, director of homelessness and housing services at Dixon Hall.

Ensuring that poor people remain in their own neighbourhoods plays a key role in the success of keeping them off the streets, he says. “Homeless men and women have a real sense of community that is lost on the rest of us.”