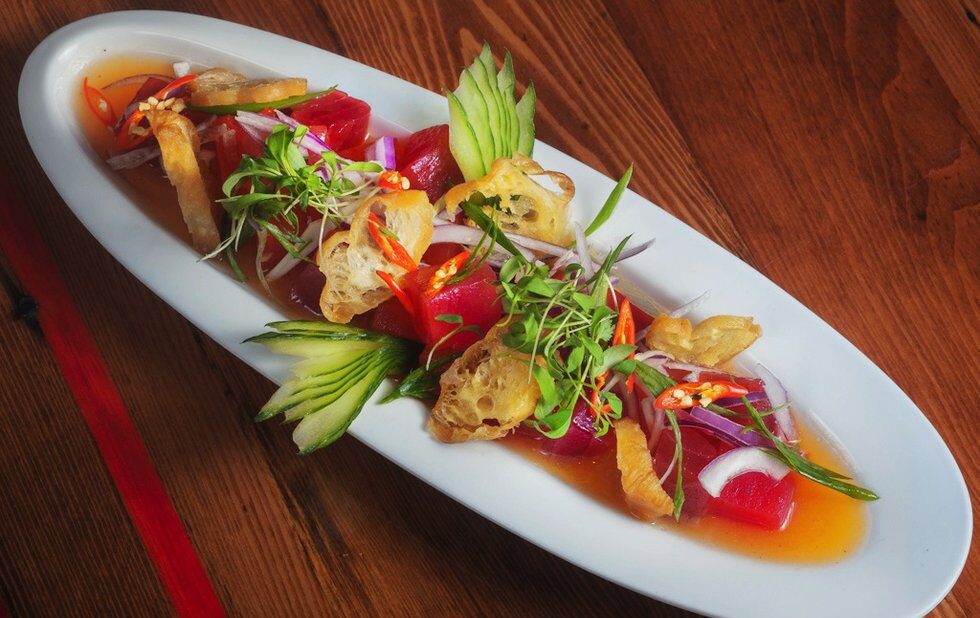 This cozy west-end spot is offering a $75 prix fixe that includes four courses, plus champagne. (Seats were scarce as of Monday – so move fast.)

One of Toronto’s coolest nouveau-Canadian joints has a three-course, $65/person menu on for Valentine’s Day. Options include lobster pie, roasted elk, and a chocolate port cake for dessert.

Nobody does romance like the French, so pull out all the stops at Daniel Boulud’s Four Seasons brasserie with a four-course, $125/person meal. Options include bigeye tuna tartare with beets and grapefruit, squash agnolotti, duck magret and roasted venison with sunchokes.

Nothing says love like BBQ. Split a pitmaster platter (pork ribs, beef brisket, fried chicken) and round it out with scallops, shrimp ceviche, Korean fried chicken and Kentucky pecan pie for $75 per person.

Downstairs at The Chase Fish & Oyster, the $65/person prix fixe includes fried chicken, lobster Thermidor and New Zealand snapper ceviche. Not fancy enough for ya? Black cod, lobster salad and palm tartare is on the Valentine’s Menu upstairs at The Chase ($95-$110 per person).

The $65 per person menu at this charming French cafe under the Thompson Hotel includes sea bass, venison tartare and sprouted lentil croquettes.

Does heart-shaped ravioli sound cheesy to you? Well, it is – figuratively and literally, in Hey Lucy’s case, since they’re stuffed with ricotta – but I for one would be thrilled if they showed up on my V-Day table. Their Valentine’s prix fixe menu also includes pizza and caprese salad options – and it’s a steal of a deal at $24.95,

As per usual, Loka chef Dave Mottershall has herbivores and carnivores covered with a pair of $75 tasting menus: One meat-oriented (featuring pickled arctic char and braised beef) and one vegetarian (with squash pappardelle and truffled potatoes). Are you or your sweetie vegan? They can make it work – just let them know in advance.

Celebrate Maple Leaf Tavern’s first year as a place you would actually want to take someone for Valentine’s Day with chef Jesse Vallins’ five-course menu ($65). Bone-in short rib and mussel bisque are on the regular menu add-ons include lobster-potato salad for $20 per couple, or $30 for a four-course wine pairing.

This mega-luxe waterfront sushi spot has a five-course menu on from Feb 10 to 14, featuring their signature flame-torched sushi, plus menu items like seared Alaskan scallops and shisho glazed duck breast.

On the mouthwatering $97 prix fixe at Daisho: pasta with duck sausage and tarragon, grilled striploin with dungeness crab, shareable sides like brussels sprouts, and lava cake for dessert.

For $105 at Nota Bene, you get a snack course featuring morsels of duck prosciutto and lobster, a four-course meal that includes smoked burrata ravioli, beef tenderloin or Digby scallops, dessert and smoked caramel truffles. Wine pairings are an extra $50.

If your taste in dining runs more to moist towelettes than white paper napkins, there’s this east-end taqueria and their annual all-you-can-eat wings and tacos deal for $27.99 (dubbed – wait for it – Wingentine’s Day).

V-Day dinner at Thoroughbred consists of a $50 tasting menu with a complimentary glass of champagne (add on extra items for up to $70). Options include tea-smoked trout, caramelized sunchoke tarte, braised mole short ribs, pear sorbet and red velvet cake.

Go for some candlelit Italian romance on Queen West with The Good Son’s $70 four-course menu, which includes a foie gras parfait with poached apricots, ricotta gnocchi with rib cap ragu and oyster mushrooms and a wood-grilled beef tenderloin.