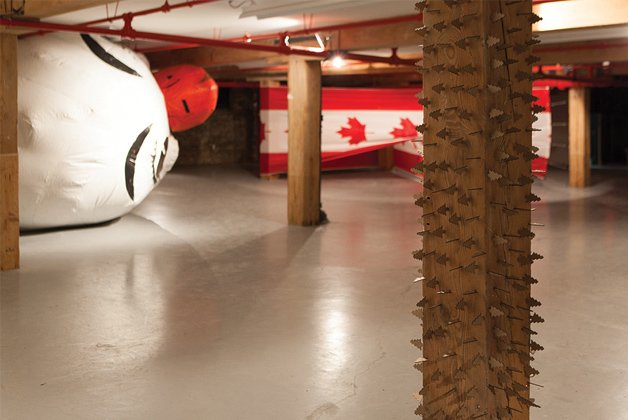 The two groups have found an impressive location in the basement of a former flag factory, with stone walls and giant wooden beams and pillars. Aficionados of industrial spaces, the artists use relatively simple means to maximum effect.

Near the entrance, Catherine Heard’s Votive strikes a macabre tone: a group of Styrofoam heads on poles drip red tears à la True Blood. But the rest of the show veers into gentler, less overtly creepy territory, adding doses of dark humour to themes of nature, Canadiana and popular culture.

A short black curtain cordons off a rectangular area inhabited by John Dickson’s Space Probe, a charming science-project-style solar system that includes hanging balls of yarn and rubber bands and a wooden-disc moonscape.

Reinhard Reitzenstein makes a forest of tiny cardboard Christmas trees sprout from the beams and columns, the scale and material resonating with the massive wooden supports. Mary Catherine Newcomb’s Winter Wheat also poetically evokes nature with a gracefully reclining hare hovering near the floor over a handful of grain.

Large works by Max Streicher and Lyla Rye dominate the space, their red and white colours echoing each other. Streicher’s bulbous inflatable sculpture made of vinyl billboard posters presses against the low ceiling like a pop-culture monster that won’t be contained. Rye pulls lengths of cloth printed with Canadian flags around the columns with bungee cords into a twisted, impenetrable patriotic labyrinth.

Working on a smaller scale, Tom Dean and Trevor Wheatley make magic from small pieces of wood mounted with rusty rods and vintage light bulbs that might be mistaken for MacGyvered gizmos from another era.

The artists all have solo careers, but it’s a pleasure to see their artworks bounce off one another in this extraordinary venue.