At Toronto artist Vanessa Dion Fletcher's first solo show, Own Your Cervix, art-goers are invited to look deep within themselves. 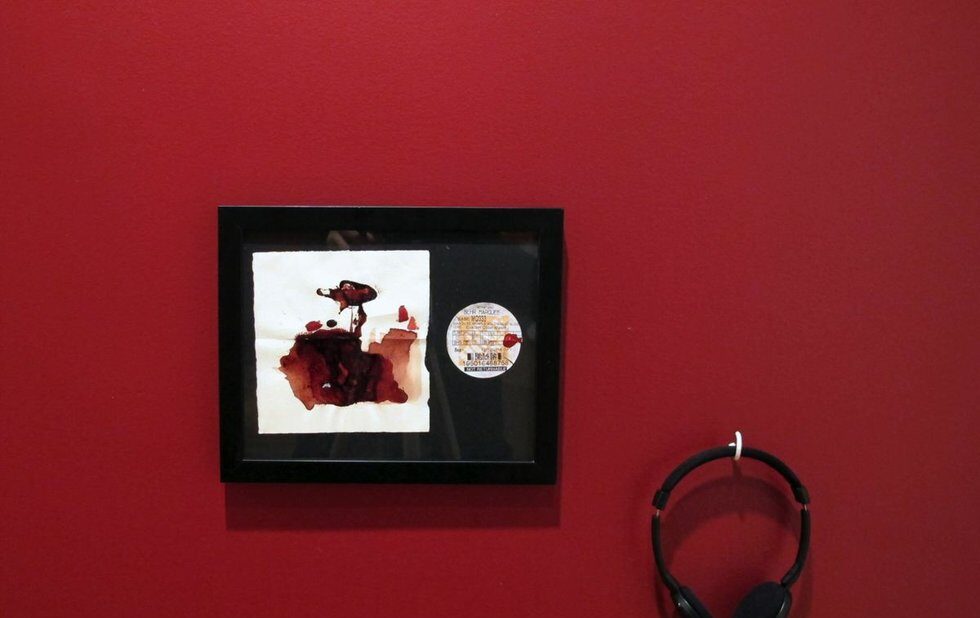 What if having your period was cool and trendy? Artist Vanessa Dion Fletcher tests it out on Miami Beach.

At Toronto artist Vanessa Dion Fletcher’s first solo show, Own Your Cervix, art-goers are invited to look deep within themselves as well as at the stunning works in the gallery.

From January 13 to 16, nine people signed up to enter a small, medical-like room enclosed by white curtains tucked away at Tangled Art + Disability for a guided cervical self-exam, complete with plastic disposable (or souvenir!) speculum.

Participants are trained on how the instrument used by doctors to open and examine the cervix works before settling on a low examination table in front of a light and a mirror for the self-exam. People with and without a cervix are welcome to participate, relying on a detailed pamphlet with helpful info about what exactly can be found inside.

“Im interested in the act of looking and describing in contrast to a medical or anthropological definition of a body to create a space where I or others can create their own definitions and descriptions of their physical bodies,” Dion Fletcher says. “Theres a kind of agency and ownership in that process, individually, and then collectively when the stories are brought together or people come together in the space.”

A video beside the self-exam room illustrates what some have seen inside, along with previous responses, recorded at Dion Fletcher’s thesis show at the Art Institute of Chicago, where she graduated with an MFA in performance last year. Many marvel that, despite being examined before in a medical setting, that they’ve never seen their own cervixes. Others remark on the textures they see or the sensations they feel. One person recognizes a pearl-like structure, noting that this is perhaps why classic literature has referred to a woman’s virginity as a pearl.

“Some people are quite casual about it and others find it quite emotional,” Dion Fletcher wrote in an email after the self-exams. “Mostly I’m continually impressed and surprised by the range of people’s experiences and understandings of their physical bodies.”

The self-exam and video are just two components of the exhibition that explores the cervix and menstruation sometimes using blood as a medium joining artists such as Sarah Levy (who illustrated a portrait of Donald Trump with menstrual blood), Lani Beloso, Charon Luebbers who have done the same. An intricately printed wallpaper covers one wall of the room, printed reproductions of an original design made with Dion Fletcher’s and her mom’s menstrual blood. It’s beautiful.

The real stunner, though, is a pristine Victorian sitting room set, covered in a white floral print. Some of the floral images are delicately outlined with menstrual blood, and porcupine quills

“It speaks to my own experience as a person of Indigenous and European ancestry,” Dion Fletcher says. “I was also thinking about how these aestheticized European motifs reference female anatomy: whats acceptable about that kind of pattern? And whats unacceptable about the stains that are produced by menstruation?”

The show is delightfully funny, too. In an audio recording (also transcribed for the hearing impaired), join the artist on a visit to Home Depot to get the colour of her menstrual blood matched to an interior paint, used as a backdrop to the exhibition.

Another piece asks, what if having your period was trendy so trendy, that people would buy it by the bottle and apply spots to their clothes?

The show is fully accessible. Tangled’s interim artistic director Cara Eastcott says that previous shows at the gallery have explicitly been focused on disability. This show, however, is more about interactive, accessible experiences.

“I think Vanessa has created a really open space that lots of different people can just come and just explore themselves and their own bodies,” Eastcott says, “and thats what we want the space to be for.”