Like many teenagers, Terri-Lynn Vader was introduced to cigarettes because her friends smoked. She was 14 years old, and for. 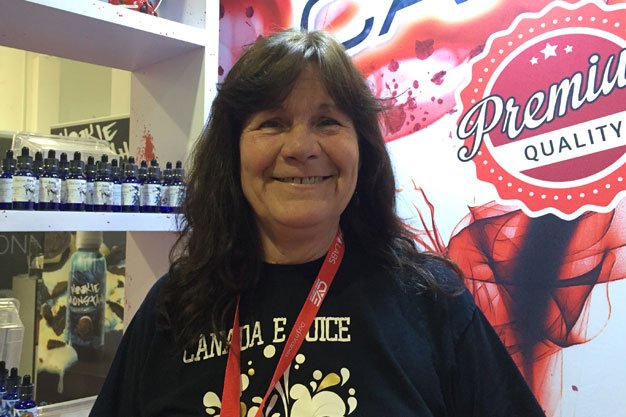 Like many teenagers, Terri-Lynn Vader was introduced to cigarettes because her friends smoked. She was 14 years old, and for the 14 years that followed, the Port Hope resident continued smoking at one point, over a pack a day until she quit in September 2014.

She didnt quit because of nicotine patches or support groups or anything like that. (She had tried all those methods and they didn’t work.) She quit because of vaping. Today she’s a volunteer with Vapor Advocates of Ontario, which organizes rallies across the province.

The day I started vaping, I had everything I needed to not smoke anymore, says Vader. It tastes a thousand times better and I feel better doing it. I smell better too, and I no longer get chronic headaches.

We cant say that vaping is 100 per cent safe for you thats not possible. Its too new of a technology. But as far as being harmful to you, we dont know that it is.

At Canadas Vape Expo at the International Centre in Mississauga on May 13, the air was thick with similar stories from the more than 180 exhibitors, including industry experts and product vendors, on the wonders of vaping.

Vaping, or vaporizing, is the process of smoking electronic cigarettes. The vaporizer contains a heating element (rechargeable by battery) that heats e-liquid or e-juice to produce vapour. Typically, the liquid is flavoured and contains varying amounts of nicotine, allowing smokers to get the nicotine hit they crave without inhaling all the other harmful ingredients found in tobacco cigarettes.

Beju Lakhani owns Vape Brands International, which sells several brands of e-juice manufactured in Canada and distributed though Lakhani’s company in Mississauga. The most recognizable is Moshi named for the Swahili word for smoke.

Moshi’s flavours are inspired by Toronto neighbourhoods. There’s Echo Beach, a cool menthol flavour, a fruity blend for High Park and Ossington, which “smells like Belgian waffle and maple syrup.

“I ended up with it because theres a diner with good breakfast on Ossington, Lakhani explains.

Lakhani has attended vape shows in Europe, Asia and the U.S. He says in every market, the industry is run by small businesses and is promoted by word-of-mouth.

Ontario has fast become a big vape market, but Lakhani says that Bill 45, the Making Healthier Choices Act passed a year ago by the Wynne government as part of its Smoke-Free Ontario strategy, could kill the industry. New regs passed under the bill limit the sales of vape products and restrict the use of e-cigarettes to public places.

Lakhani is also president of the Canadian Vape Association (CVA). While the CVA isnt a lobby group – it’s registered as a not-for-profit its members are people with a financial stake in Canadas vaping industry and pay dues that recently have gone towards building opposition to Bill 45.

Lakhani says similar restrictions and new regulations costing companies millions of dollars Stateside have forced manufacturers and shops out of business. “The market is basically being gift wrapped to the tobacco industry, says Lakhani. I hope the government in Canada understands whos selling and buying these products, and that theres a public health benefit thats organically taking place here. There are smokers everywhere and lots of demand. People just want to quit.

Lakhani says that can’t happen if people running vape shops can’t talk to their customers about vaping. The Act prohibits vendors from promoting their products.

There are lots of products available, a lot of nicotine strengths, different viscosities of liquid that affect how it vapes, and our big concern is we want to make it as easy as possible for someone whos new to vaping to walk out of a store with something thats going to work for them.

The CVA is pro-regulation, says Lakhani, who says theyre working with government to make the industry safer for everyone. This includes rules about not selling to minors and ensuring ingredients used in e-liquid are of a certain standard.

Lakhani says he smoked a pack per day for nearly 20 years, unsuccessfully trying to quit many times before a friend handed him a vaporizer. Now, the new dad says he’s taken up cross-fit training and doesnt have a morning cough anymore.

My physical health has gotten better, and I have the energy to get through the day,” he says.

Some experts say vaping is safer than smoking. But Toronto Public Health has raised concerns about emerging evidence of health and safety risks associated with e-cigarette devices, as well as exposure to second-hand vapour.

TPHs position statement on e-cigarettes says that “rapidly growing youth use of e-cigarettes, is concerning because it may lead to nicotine addiction and smoking initiation in young people. And that e-cigarette use could impair denormalization of smoking behaviour and undermine quit attempts. The statement notes that quality control and manufacturing standards for e-cigarettes are lacking.

Anybody who thinks they can make a bottle of juice is now doing it, and not taking care into what the actual ingredients are, she says. I always tell people to check the manufacturing guide sheet.

Walker, a former waitress who started vaping thanks to her son, got into the industry in 2012 after sourcing some ingredients from China and creating three e-liquid flavours in her apartment. Interest quickly spread by word of mouth and Walker moved to an industrial venue. Her company now manufactures more than 130 flavours made only from food-grade sources in North America and Walker runs one of the countrys largest wholesale and retail operations, employing 14 ex-smokers who were all hired after agreeing to a quit-smoking program.

The 58-year-old says she spent most of her life smoking cigarettes and credits vaping to helping her finally quit. Now, she says she’s made it her mission to help others kick the habit, working with customers to gradually lower the nicotine amount in each bottle of e-juice they buy. Typical pack-a-day smokers start at around 18 milligrams and are weaned off nicotine by a reduction of one to two milligrams with every bottle.

After a couple of months, some of them are not even vaping anymore,” says Walker. “I may lose a customer but I helped a smoker quit and thats what matters.